Is it feasible to synthesise sound with analog circuitry these days?

A friend of mine who is a layman in terms of electronics asked me to teach him how to synthesise audio with some analog circuit and how to build it. For some reason it has to be analog. Probably because that's so cool these days. I don't really get this.

The problem is that I'm not into discrete electronics either.

I concluded that there are many circuits that can produce oscillating signals and thus sound. The astable multivibrator came to my mind. However, for audio the signal cannot be just periodic. It is necessary to produce the desired shape like sine, triangle, rectangle, etc. without overtones (or at least as few as possible)

In theory for example, a simple \$RLC\$ circuit can produce a nice decaying waveform of a single frequency. But in the real world, a component is part of an electrical network that influences its behaviour.

The answer I gave was "Just use a microcontroller." However, I received the the answer that programming is "very complicated". I have a feeling that behind this lies the fallacy that designing analog oscillators is an "easy task".

Am I on the right track that it doesn't make too much sense to create audio with analog circuits these days? I found this upvoted answer from Olin, which supports my reasoning. I don't want to be the downer and due to my own lack of experience I might be on the wrong track entirely. Maybe there are simple ways to create oscillators for audio synthesis with analog components?

Yes, you can create complex waveforms without needing a microcontroller, by making use of the audio blocks such as oscillators and filters that are part of an audio synthesizer.

The document titled "How to Design and Build an Analog Synthesizer from Scratch" includes lots of schematics and theory for building these various audio blocks.

One of the comments has already mentioned a Moog synthesizer costing $35,000. However Moog also sells many other synthesizer models in various price ranges, at the bottom end is a kit for $329 called the Werkstatt-01 which is shown below. But you don't have to buy one; you can download the schematic from their website, and use bits and pieces of their design. Combined with the document referenced earlier, you should have plenty of ideas. 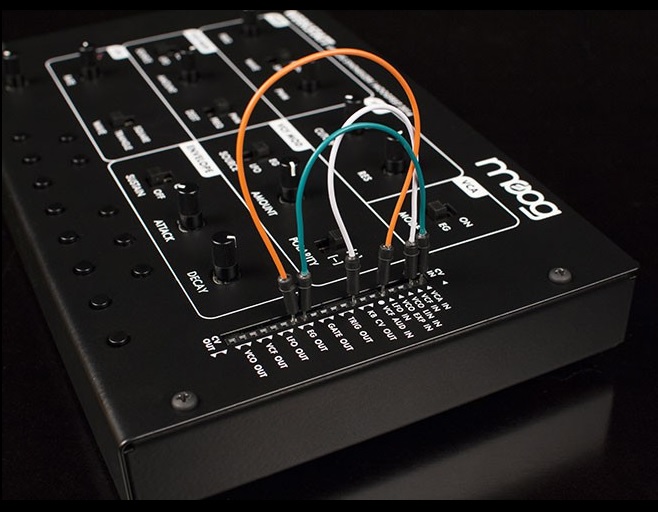 Of course it's feasible. Everything (well, just about everything) that was feasible in the 1970s and 1980s is not only feasible today but actually MUCH easier.

You can make LC oscillators. The capacitors and pot cores are easily available. Capacitors with a negative temperature coefficient (to compensate for the potcore tempcos) might not be so easily available. VCOs that cover the audio range are easy to make with op-amps

Generally the simplest method of synthesizing sounds consists of generating some sine waves, and some noise (a zener diode can generate noise) and filtering the noise and gating the sounds through some envelope generators that have specific attack, decay and sustain characteristics. Something like a cymbal would have a bunch of noise, a piano much less so.

But just because it's feasible doesn't mean that just anyone can do it. They could always find an old construction article in dead-tree format and attempt to adapt it even if they were not capable of doing the design. Probably most of the stuff is still available.

Unlike back then anyone can get boards made cheaply and reasonably quickly, so assembling some hundreds of parts is not such a big deal.

Anyway, I'm sure if you troll through the archives of the Brit publication Practical Electronics and similar publications you should find some inspiration.

You could start with the Russian invention Theremin? Not much circuitry there.

Not the answer you're looking for? Browse other questions tagged audio analog frequency-synthesis or ask your own question.

7
Is this a suitable sine wave osc? how would I control the frequency?