I am transmitting RS485 via:

Via debugging I am able to see that transmission from the application to the PIC is successful, and the PIC transmission out of its serial port is also OK. However, when the SN65176 is switched from receive mode to drive mode, the output low level is very noisy (see scope capture): 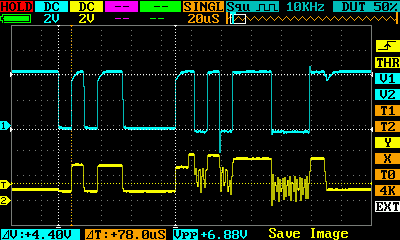 The RS232-to-485 adapter is an XS201A. It claims to have fail-safe biasing; however, direct measurement does not support this claim. Perhaps that's because the bias is only enabled when the unit is powered, but I don't consider that particularly fail-safe. It provides no schematic and it's a sealed unit, so it's more difficult to reverse-engineer the thing; however, when driven in the presence of external 100ohm termination on both ends, I see the following voltages:

With the SN65176 disconnected, and some slightly different biasing, it seems that the XS201A has an undocumented 4 bits of line drive after which the driver is disabled: 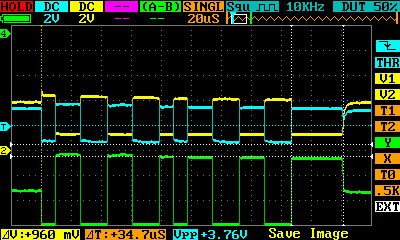 This shows two consecutive 0x33 from the PC. There is one stop and start bit surrounding both bytes, plus the trailing drive timeout.

To summarise the discussion and respond to your test results:

Agreed, that behaviour fits with what I have seen before on some converters, and thanks for running the test.

It is likely to be a relatively fixed time that the line is actively driven after the transmission by that RS232-RS485 converter, rather than a constant number of bit times irrespective of bit rate. You could change the bit rate significantly and re-test to confirm that the "line driven time after sending" still remains similar to the current ~35 us. You might also find that there is a variation in that "line driven time after sending" depending on the data byte being sent, so I suggest more tests with different bytes to check that.

This was another recent topic here on EE.SE (How is this RS485 Module Working?), where a partial schematic shows the type of circuit which can be used to provide the "automatic" switching between send & receive on RS-485. However those do not switch immediately when a transmission finishes, leading to the sort of behaviour you have observed.

As I see it, some options include:

You may want to research terms like "RS-485 turnaround delay" or "RS-485 auto-turnaround" for more information and experiences when time-multiplexing multiple transmitters on half-duplex RS-485 buses.

Not the answer you're looking for? Browse other questions tagged serial digital-communications rs485 serial-bus or ask your own question.