Today, I started noticing a clicking noise (at a frequency of maybe 0.5Hz), and after a while, located the source as an alkaline AAA battery powering noise canceling headphones.

The battery did not look all that heavily corrupted, but was leaking fluid when handled. I decided to dispose of it ASAP rather than let the scenario play out any further.

However, I'm curious as to what exactly I might have been hearing. I found some discussions speculating on the phenomenon on the internet, but none of the answers looked really high quality. What could be causing such a rhythmic clicking?

Like most batteries, Alkaline batteries produce electricity through chemical reaction. This produces byproducts like liquid and gas. The former can be seen when a battery goes bad and leaks out. The latter can be heard. It's normal for hydrogen gas to be produced. The batteries are not sealed, to allow this gas to vent. But misuse of the battery, or if it goes bad, excessive amounts of hydrogen gas is created. This, along with liquid corrosion byproducts, can cause gas bubbles, which you can hear.

Figure 2 is a cutaway drawing of an alkaline cell which uses a seal that consists of a vented plastic grommet. An alkaline battery requires a vent because there are circumstances in which it must release gas byproduct. Our lithium cells can be hermetically sealed because gases that are produced inside the cell are quickly dissolved in the electrolyte, and because the speed of the chemical reaction is limited by the inability of the cell to produce high current. 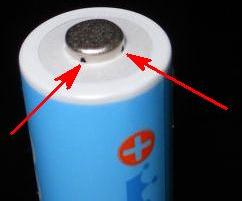 I personally experienced this lately, when I modified a solar light circuit to use as a Joule Thief. I connected two AA Alkaline drained to 1.1V each to a YX8018 solar charger and led driving circuit to bypass the 0.6~0.8V UVLO feature and drain those suckers dry. One cell drained down to 0.3V @ 8mA by the next day and started leaking and clicking. Same half second frequency. Word to the wise, don't bypass UVLO circuits. I don't expect it to explode, but cleaning battery gunk isn't fun.

Not the answer you're looking for? Browse other questions tagged batteries corrosion alkaline or ask your own question.