How do I find the voltage range for an unknown DC motor?

I have a small unmarked motor with a burned out speed controller board. I'm able to figure out that the motor is a DC motor because it has two wires coming out of it and there's a rectifier on the speed controller.

I want to find out what is the maximum voltage range for the motor, but it is proving difficult. The board appears to have a triac and perhaps a diac or some diode. There's no transformer so I guess it's probably operating at full 120V. There's also a bunch of resistors and capacitors which is probably uses for PWM.

I chucked the motor on my drill press and spun the shaft at 570RPM or 59.69 radians/sec and got 16V output. The motor resistance is 39 ohms (was reading 50 before).

Is there a chart or formula for the voltage vs speed and or voltage vs torque for a DC motor?

FYI, the motor diameter is about 2 inches wide and the height of the motor is about 4 inches. The motor has a plastic worm gear attached to it and was used as a neck massager. My guess is that it needs to operate at high torque.

Here's a photo of the motor and a snap shot of the circuit: 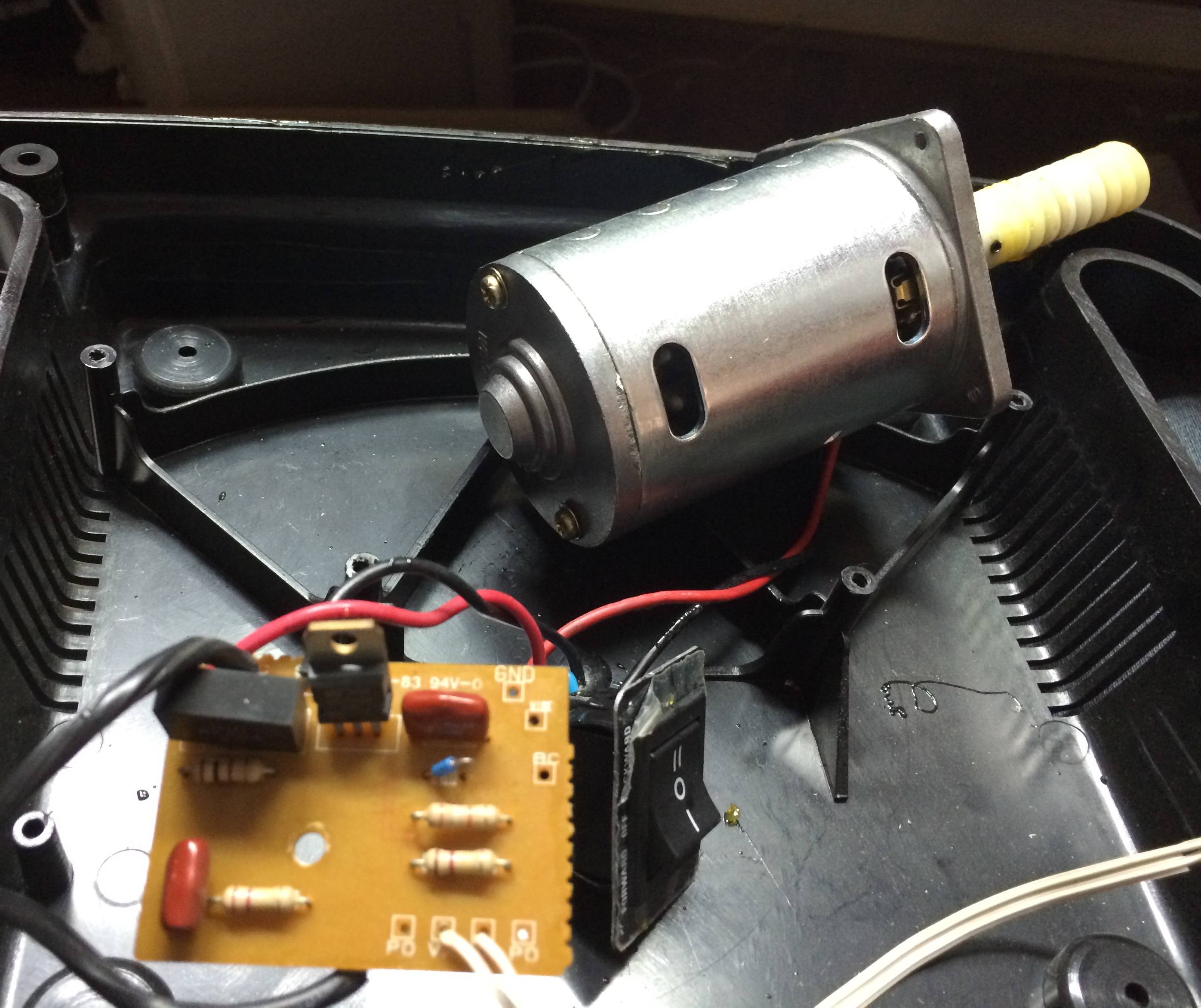 It's mostly about how much power the motor can safely dissipate without getting too hot. A secondary issue is you don't want the motor to over-spin, but usually it's pretty obvious when it gets that far.

Your measurements give us some idea, but it would be additionally helpful to know the physical size of this motor. That allows for the first pass guess as to how many Watts it can dissipate.

Let's look at it another way. For the back EMF to be 170 V would require 6000 RPM (100 Hz). That would be the absolute maximum speed. Is that plausible? That's not out of line for a DC motor, not knowing anything else about it. Of course it wouldn't actually ever get that fast because there would be no EMF left to actually drive it, and no torque left to drive anything else.

R can be measured as I said above in a comment and which I'll repeat here. Resistance can vary on a DC motor due to brush contact. The best way to measure resistance is to take several measurements and average. If possible, lock the rotor and then apply a small current to the terminals. Measure voltage and current and calculate R = V/I. Typically you this test would be done at ~25% rated current. Repeat several times and average. There is a dynamic test, too, that can give even better results - do the same as I just said, but instead of locking the rotor, back drive the motor. 50 RPM would be sufficient speed at which to back drive the rotor.

There are a lot of assumptions in what I wrote above. The 2 main assumptions you should be aware of are 1) that the motor stays relatively cool (so the resistance doesn't change) and 2) that the no-load current is zero (in reality it won't be).

Depending on how critical it is for the motor to work after testing and what equipment you have, you might slowly increase the voltage into it while keeping an eye on temperature, speed, and current. You may also include a mechanical load of some kind and measure torque, like a dynamometer. The point that you're comfortable with is up to you.

As for the formulae, it depends a lot on the geometry and how the motor is wound internally. It's basically a set of electromagnets that interact with a set of permanent magnets and are mechanically switched at the appropriate times to keep it running in the same direction. For a given strength, you can make a high-current, low-voltage electromagnet or a low-current, high-voltage electromagnet. And that's only one of many parameters. I think you're better off finding the spec sheet or doing your own experiments.

Assuming that it is a permanent magnet DC motor (and not a synchronous, induction, or 'universal' motor) your generator test indicates that the Kv (velocity constant) is 3.73rad/s/V or 36rpm/Volt. Therefore on 120V it should do about 4300rpm.

Not the answer you're looking for? Browse other questions tagged power motor dc power-electronics or ask your own question.

1
DC Gear motor Operation
7
Is there a good reason to use an SCR based speed controller instead of a TRIAC?
0
Looking for extremely high power dc motor controller solution, 120 VAC to 90-180 VDC, 5-10hp range
2
Sizing a motor for a conveyor
0
Why can't I change the speed of an ininduction motor by changing the voltage?