Why is capacitor placed in parallel for power factor correction? 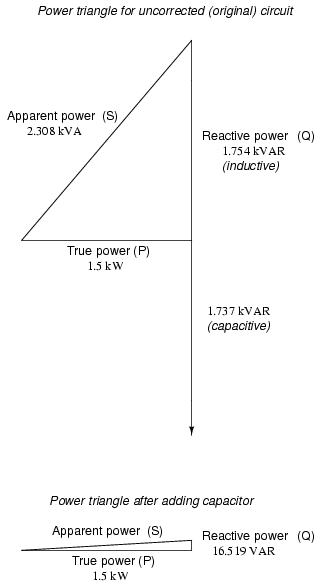 Why does one place the capacitor in parallel (as opposed to series)?

With the capacitor in parallel, there is now an additional source of energy, which can take up some/all of the burden of supplying current to the inductive load (when it resists changes in current till it sets up its field), after which the source takes over again and recharges the capacitor. So the apparent power S (and thus energy) drawn from the source is reduced and is much closer to the true power P actually being used by the load.

Current can only flow in a closed loop, so a series capacitor cannot keep reactive current from flowing through the distribution grid, which is the very thing that power factor correction seeks to avoid in order to avoid the resistive losses of that current travelling long distances through practical conductors. Basically, the only way a series compensating capacitor could be effective for power factor would be to tune out the ability of the machine to draw power at line frequency at all, which would make it non-operational.

As you know, the purpose of power factor correction is simply to decrease our apparent power usage, making it equal to (ideally) our real power usage.

The problem with series capacitors

The benefit of parallel capacitors

With a parallel capacitor, our load always sees the full voltage \$V_{S}\$ anyway.

But, what about real capacitors?

But, even with high values of \$R_C\$, there is still value in doing power factor correction! The only difference is that now we're no longer seeking a power factor of 1 ("unity"), since now we also have to take into account the real power usage of our "real" capacitor as well.

The resulting total impedance will still be greater than our original \$\left|Z_L\right|\$, and, consequently, our apparent power usage still gets reduced!

if you put series you will create distorted output (limiting the current) which is why in cheaper led bulb the controller output is only Mylar Cap.

if you put parallel both L and N will surpresed against high amperage reactance power from the load. capacitor in AC parallel for PFC working like dampening the load. yes it's charging and giving output in the next cycle so your reactance power decreasing.

if you keep both series you will get current very limited by capability of your capacitor which in many cases will be blown out by overheat occurred by current flowing through it.

if you want to lower inrush current you can try NTC in series with line. it will giving you protection against high amperage starting.

Not the answer you're looking for? Browse other questions tagged power-factor-correction or ask your own question.