Mounting through hole package on busbar

Through-hole components are not designed to be busbar mounted. But I have the need to use "laminated" busbar because of some factors (among others):

Power PCBs are also not available for small production, or even not manufactured at the thickness intended. Also they will present some problems to mount too.

Using modules or packages like SOT 227 is not an option now because of the cost, and the added terminals inductance of modules.

I have TO-247 IGBTs and I'm studding ways to mount then to the busbars.

Some of the options: 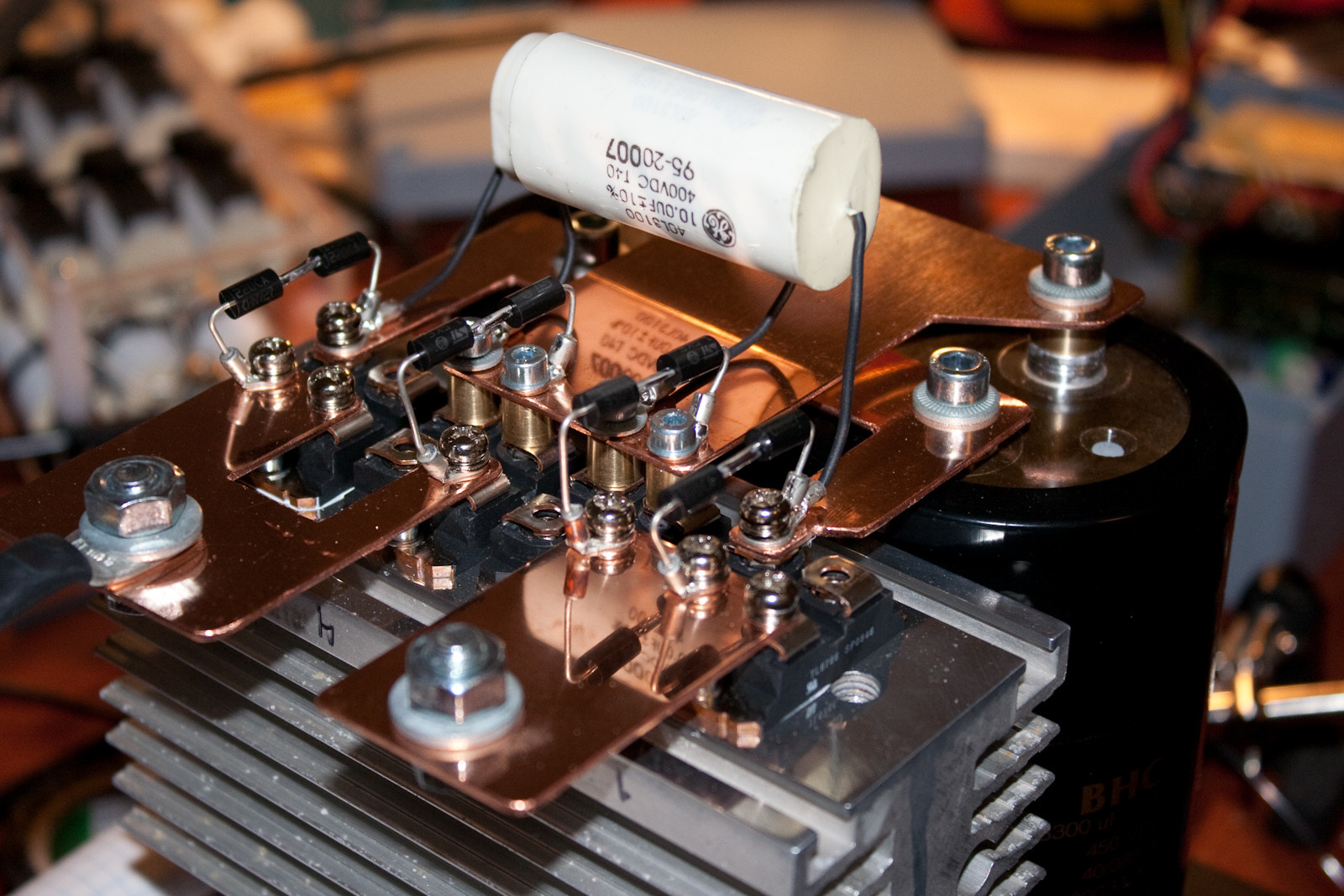 This project uses the connectors only at some components.

The problems applying that to the TO-247 package transistors is the spacing between leads. The TO-247 has near 5mm pin to pin spacing, so the connector should be small if not to bend the terminal.

(Yes this will add a little parasitic inductance, but probably less than modules).

Why do you think you'll over heat the package? I solder large power transistors, including TO-247 size power transistors and FETs to much more substantial copper than anything in your photo. Like a solid copper heatsink that weighs several pounds. I've yet to have any device be damaged in any measurable way by this. These packages are designed to endure reflow, which usually involves the entire package reaching temperatures of at least 260°C. The bigger TO power packages are designed to withstand several reflow cycles of 260°C for 2 minutes straight, then allowed to cool via natural convection over as long as a 20 minute stretch.

Just use a heatgun/hot air gun like the kind you'd use for heat shrink. 1200W is plenty. Personally, I have one of these. Hardly high end or precision but its effectively a hair dryer with a much lower CFM airflow rate.

Use it to heat the entire copper bus bar to temperature, put a generous amount of solder paste on the back of the transistor, use some pliers and hold it in position against the bus bar. If you heated up the bar enough and it has enough thermal mass, it will bring the transistor up to temperature, melt the paste and flux, and form a very good joint. Keep the transistor immobilized until the solder has completely solidified (which might be a bit below when it stops being a liquid if it is not eutectic - though if you are able, use eutectic solder for this).

That is how you get the highest quality joint, but you can achieve something nearly as good by just slathering on some flux and using wire solder and pliers.

Bringing that much copper up to temperature might seem a little excessive, but that's how its done. You are right, the copper will suck the heat away too fast. Use that to your advantage. Not only can you do the initial joining this way, but it it is perfectly safe and suitable for rework as well.

Entirely due to that great thermal conductivity. That conductivity means that it will spread out heat and become a uniform temperature very quickly, so you can blow air on a somewhat distant section (distant from the semiconductor parts etc.) and this will diffuse the heat and bring everything up to temperature without causing spot overheating. Also, a 1200W heat gun will have no trouble heating those busbars. I can personally attest that it will heat those bus bars up in short order. I've used my 1200W heat gun to heat up 3 pound passive Xeon heatsinks that are solid copper and larger than the aluminum heatsink in your photo, and soldered power components directly to it. They were not damaged from this.

The primary concern for most semiconductors in regards to heat is their epoxy encapsulation, which is what supports the lead frame and bond wires. However, as long as you do not mechanically stress and seriously overheat the epoxy, it is fine. The silicon itself is, well, silicon. Do you know what 260°C does to silicon?

Nothing. It's silicon. It melts at 1414°C. They are heated to well above soldering temperatures post-lithography during manufacture. On the order of 1000°C, often to diffuse dopants into the silicon. They are cooled extremely slowly, so spend no brief interval at such temperatures.

Those are integrated circuit dies. You are just wanting to solder some big beefy discrete power transistors. They are beasts, they're hardy, they are mechanically and thermally very robust. In the case of MOSFETs, the weakest point is some discharge punching a hole through their metal oxide layer, but certainly nothing thermal or mechanical. They most all won't care about some brief heat.

But even sensitive silicon doesn't really care that much. Like CPUs for example. Here is a CPU, an old AMD X64 CPU that hat a maximum operating temperature of 72°C, that I soldered directly to a copper heatsink. With lead-free solder, SAC305. The higher temp stuff that everyone recognizes as simply 'that solder that they hate'.

It is fine and continues service as an OpenBSD routing box that is handling the very traffic that I am using to post this. 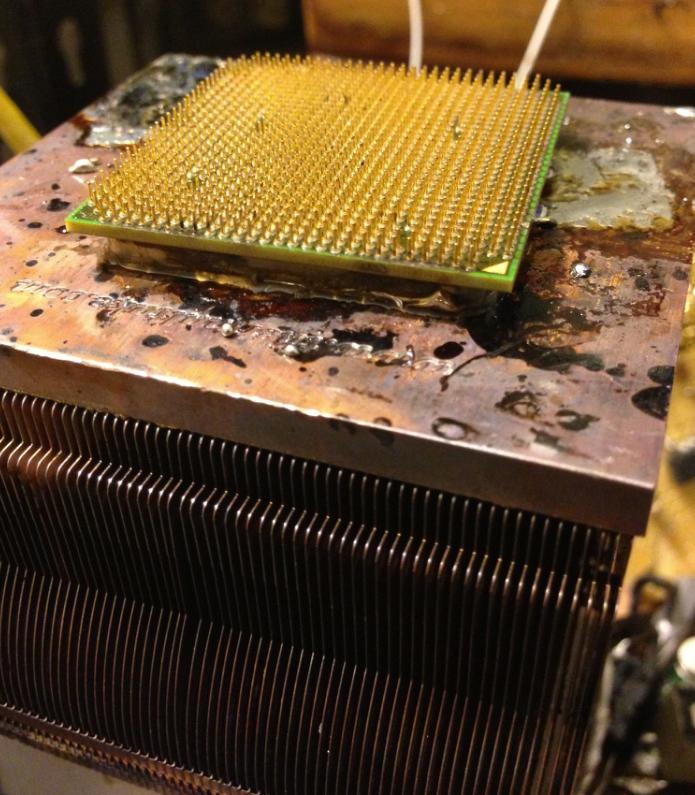 I certainly don't recommend such activities, but I hope it proves my point: its ok to get most semiconductors hot. Just watch the epoxy, if there is any.

A note on the oxide build up: In that picture, I actually got the heatsink a bit too hot and excessive surface oxidation of the unfluxed parts occurred. A few hours soak in some water mixed with food grade citric acid from the health food store took care of that. (Only treat copper with this though, not tin or solder or other metals).

Now, if you still have good reasons that prevent you from bringing the bus bar up to temperature, then just solder the parts using Bi58Sn42 solder. It is readily available in paste form, melts at 138°C, is eutectic, and forms a strong bond. It is what is used to solder heat pipes to copper fins in many CPU and GPU heatsinks. Heat pipes contain, at least in this application, usually methanol, so overheating them will build pressure and cause them to burst. Given that heat pipes are basically magic and have thermal conductivities as high as 2 orders of magnitude more than any known material (the heat is moved by the methanol, via heat of vaporization, then condenses at the other end of the heat pipe, allowing longer heat pipes to have 250 fold the thermal conductivity of copper), bringing the entire thing up to temperature is even more so the only option. And it works fine as long as low temperature solder is used. If your parts are going to get hotter than 138°C during operation, there are a huge range of different solder alloys with varying liquidus temperatures.

Soldering is definitely the method you should use though. It will have the best thermal and electrical performance and by a large margin over other mounting options. It's easier. It's cheap. You've done it before. Don't over think this - heat is the least dangerous thing that those transistors will potentially be subjected to in a SSTC build. Trust me. Anyway, good luck!

Not the answer you're looking for? Browse other questions tagged transistors through-hole mount busbar or ask your own question.