I need to develop a controller board for some peripherals which communicate at 9600 baud with 1 start bit, 9 data bits, no parity and one stop bit.

I strongly prefer SD card support, and Ethernet / Wifi would be nice (I don't care too much about BlueTooth or USB, so long as they don't significantly increase price).

Needs to be able to run 24/7 in an embedded device.

I prefer something with FreeRTOS or similar and a good development IDE including debug facilities.

Am I asking too much or does such a beast exist?

The ATmega series has a 9-bit UART

The ATmega series of microcontrollers (datasheet) has the ability to use 9 data bits without messing with the parity bit. This functionality is described in the timing diagram:

Note that the bits are numbered in the figure from 0-8, which is a total of 9 bits. The caption refers to this numbering, it does not indicate that you can use 0-8 data bits. The minimum number of bits in a character is 5, and the maximum is 9, not 0-8.

You can set the width of the data section by the UCSZ bits. The settings are described in table 19-7, pictured below: 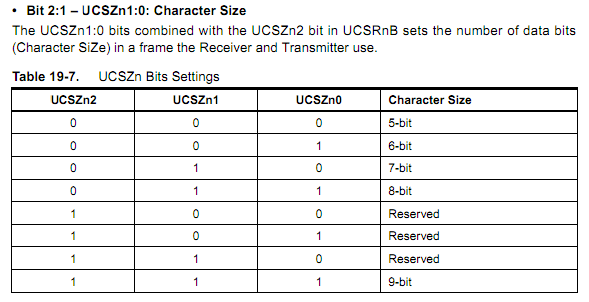 To set this in C using AVR Libc, you would need to execute the code:

Note that you'll probably want to specify the other bits in these registers while you're at it.

Many other processors also have this

There are almost certainly other processors which support this feature set. Atmel's ATtiny processors have the same USART as the ATmega, and are code-compatible, their AVR32 processors have the same true 9-bit support, but a different programming interface, the dsPIC processors support it, but without a proper parity bit (see page 243 of this datasheet; set bits 1 and 2, PDSEL of the UxMODE register)...the list goes on. The first processor that I checked which did not support it was a Stellaris Cortex-M3 part, which supports 5-8 data bits, but not 8 bits.

But you should use your other constraints to narrow the options first.

In the end, though, you should do your processor selection based on other factors first. You wrote:

I strongly prefer SD card support, and Ethernet / Wifi would be nice (I don't care too much about BlueTooth or USB, so long as they don't significantly increase price).

Most people will access the SD card in SPI mode, and almost everything has an SPI port or two. Ethernet/WiFi is too generic a spec and a much harder requirement to meet - Do you want an integrated MAC with an MII interface? Integrated PHY? Would you prefer to do all the TCP/IP stuff on-chip, or offload practically everything to something like a WIZnet W5100 or Lantronix XPort. You can also use components like the Microchip ENC28J60 to move the MAC and PHY to an external chip, accessed over SPI. Your other requirements are much more exacting than a 9-bit UART.

In fact, you could probably use a $1.50 ATtiny as an SPI'/I2C<->9-bit UART converter if you wanted to. That would be much less expensive than choosing a sub-optimal processor for your other requirements.

Some web searching indicates that the following families may have a hardware 9-bit capability: ATMEGA, dsPIC, 8051, STM32 and of course many others - but then there are also a lot of 7/8-bit only UART peripherals too.

At the cost of greater driver overhead, an 8-bit UART with parity support can be made to transmit 9-bit characters by determining the parity of the 8-bit value to be transmitted and then setting the UART mode to even or odd parity as required to achieve the desired value of the 9th bit. On receive the parity error flag is read and the 9th bit determined from that and the calculated parity of the 8-bit value.

A software UART can of course implement an arbitrary character width.

I've observed UARTs offering varied levels of support for "nine-bit data"; one sometimes has to read data sheets carefully to see how things will really work.

In some ways, it would seem that using nine-bit data should be simple. Too bad it seldom is.

In most cases 9-bit UART can be emulated with 8 data bits and an explicitly set parity bit. Check this thread for some discussion.

There was a request just yesterday on the Arduino-Developers mailing list to add support to the Serial library to allow users to specify data bits, stop bits, and parity. The Mega328 UART (which the Arduino hardware is based on) can indeed be configured for 9 data bits, so if this patch/feature request gets adopted it could make it quite easy to set up and code. The software is not implemented today, but it's certainly plausible.

Not the answer you're looking for? Browse other questions tagged microcontroller serial uart or ask your own question.