Finding the output resistance of this circuit

I have a BJT Darlington pair with resistances connected to the base and the emitter. I want to know its output resistance seen from collector. I drawed the circuit that needs to be solved for this: 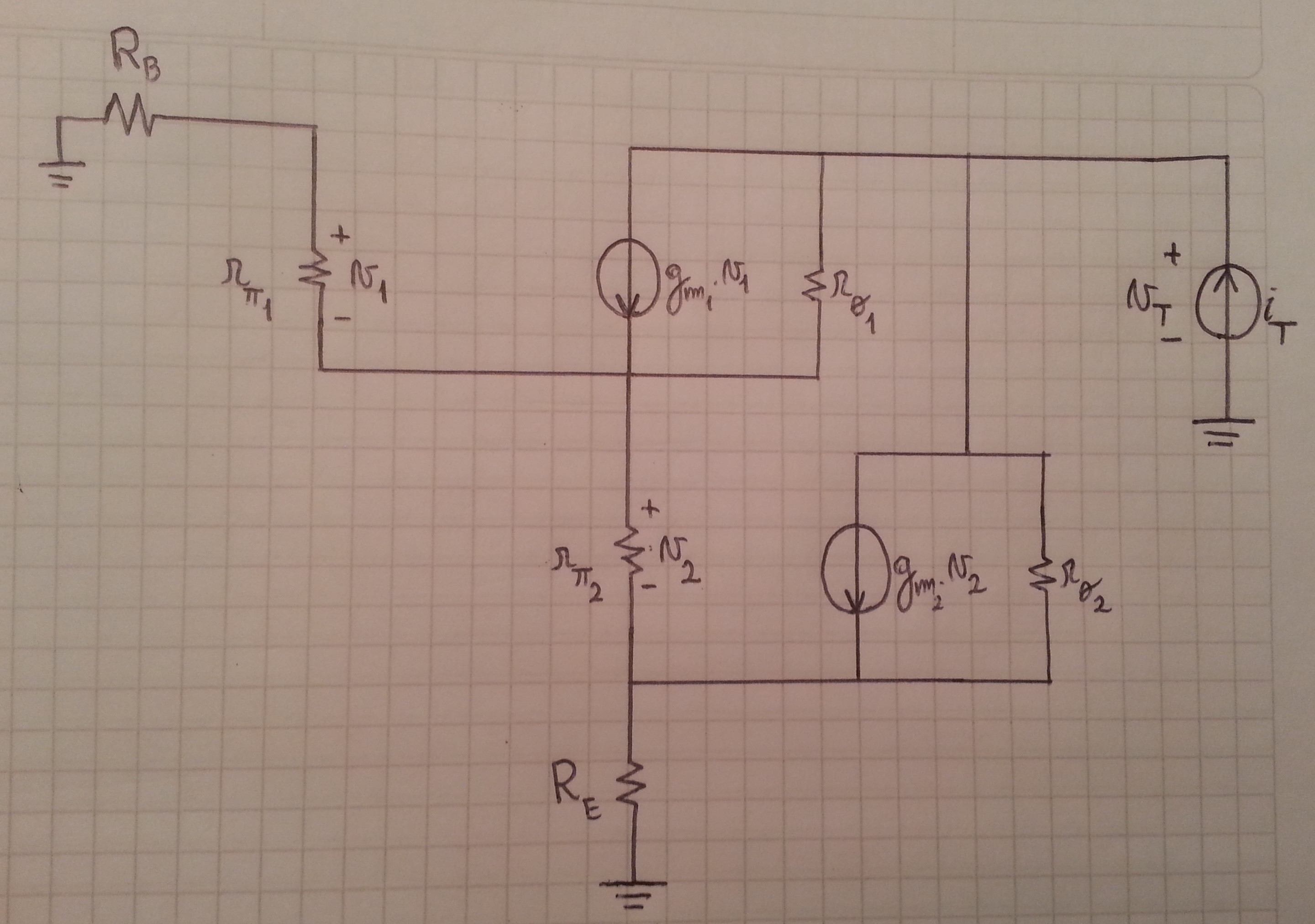 In other words, I want to find \$R_o = \frac{v_T}{i_T}\$ in the circuit above. I tried to do nodes and mesh but I'm not getting anywhere, I don't know where to apply the equations, which currents and voltages could be useful. Any ideas?

You can solve this problem many ways. This is just the way that I would approach it.

First, label each node with its own name. I will just give you a couple equations, you can find the others. For this, assume the node which V1 and V2 meet at is called Va.

Inject a current i_t into the output node, as you have drawn. This injected current will be equal to the current in each branch (through gm1*v1, Ro1, gm2*v2, and ro2).

Now you have 4 nodes which you can write the sum of currents equations for. This sets the minimum number of equations you will need to compile before you can solve for any variable. There are many equations you can write to solve this, the idea is that you need to relate these variables together. Mesh currents is just a method that will always help you solve the problem using small signal. Another is node voltages. Personally for me it makes more sense to do the sum of currents at each node (node voltage style), rather than the mesh current method.

I would write the sum of currents at each node (like I did for the output node) and eliminate variables. First eliminate either v1, v2 or va, vb (whichever seems more intuitive for you; I prefer solving node voltages with reference to ground); since those are redundant.

Not the answer you're looking for? Browse other questions tagged circuit-analysis bjt darlington or ask your own question.

0
current amplification of a circuit containing a transistor
2
Bipolar transistor as a switch
3
Understanding optocoupler performance with collecor or emitter resistors
5
Differential and Multistage Amplifiers(BJT)
2
finding the output resistance of npn current mirror
0
Calculating base-emitter current of a BJT, with emitter connected to ground (no resistor)
0
Biasing in this FM transmitter
0
What is the collector current of this transistor circuit?
3
Analysis of unbalanced bridge circuit