DALI Multi-Master: How to design a multi-master system? Is it part of DALI standard?

This question is haunting me for a long time. This could be something very basic and I do not know how it works or could be some misunderstanding! I am now using STM32E407 as DALI master and am working on the implementation of DALI. I have achieved some basic results on single Master- single Slave, now I want to look at the problems involved in multi-master DALI.

My idea is to design a light control system with at least 3 DALI buses and if possible with a (1-10v) controller!

On single MCU, if I use different timers and GPIO pins to run different DALI buses and use two non-terminating loops in while(1) loop(or main loop), it will not obviously work as parallel processing is not possible on single core MCUs!

So, my immediate idea is to go for a modular approach, where each MCU will be implemented and running with DALI stack, providing just one DALI bus and I can use several of these to implement several buses. To do something as shown below is my idea. 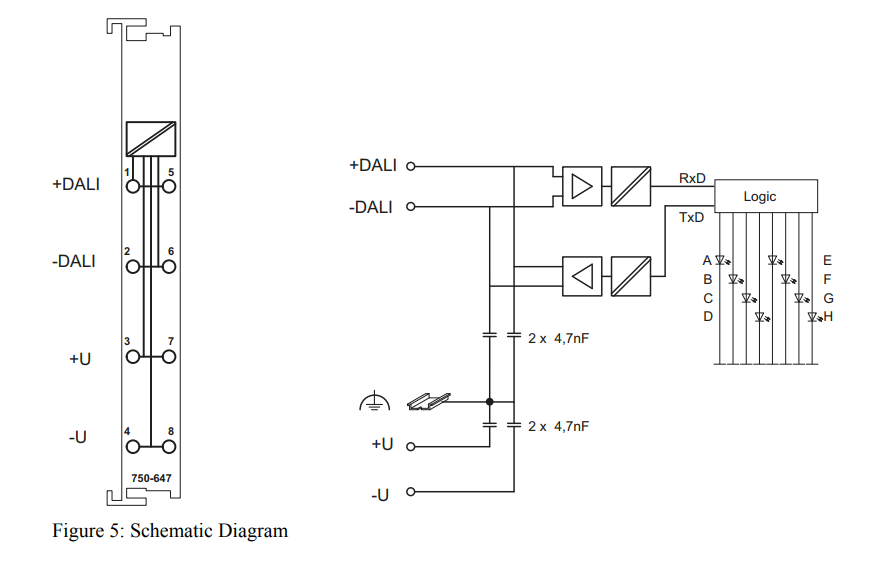 I am guessing the "Logic" here is a small MCU or MPU and WAGO is using modular approach that is why each clamp provides one DALI bus!

I would like to know how multiple DALI buses or Multi-master systems will be developed in general?

and is it something that is part of DALI standard??

You are confusing several concepts here. Your block diagram is for three Single Master Control Devices (to use the IEC terminology). That is possible to implement in one single core microcontroller using timers and interrupts, since a Single Master is in control of the bus timing. That is, you decide when to transmit, and can only expect incoming messages as responses to queries you have generated - this is what is meant by a Single Master. It might not be possible if the other items on the bus are not control gear, ie. items which can generate a frame at any time would not be allowed, but control gear can only respond to queries.

Multimaster control devices are part of the standard, you need to purchase a copy of IEC62386-103 to see all the details. This is relatively recent, so microcontroller App Notes from several years ago will not have this information. The Multimaster timing requirements are much stricter than the single master timing so that collision avoidance, detection and recovery are possible and mandatory. Several multimaster devices are allowed to share the same bus because of these features, and then you have to implement more commands than you would have to for a Single Master design for it to work properly.

Multimaster in this standard refers to the bus timings so that valid communications can take place. It does not imply multiple application controllers (the control logic). It is up to the system designer to decide if they want multiple application controllers and how to split up the gear addresses so that there are not conflicts, that is not standardised under IEC or DALI.

Your next decision is if you really need 3 busses or whether you can use one bus and use the addressing system to separately control the gear. With 3 busses, you can have the full power supply on each one and use the simpler broadcast address system. With one bus you could have less interface hardware and cabling, but the commissioning is more complicated.

One option is sequential frames. Choose to handle one bus at a time, send a frame, if it was a query you would need to allow time for the response or timeout due to lack of response, before handling the next bus. This would probably be fast enough if you only have three buses to deal with for the lights to appear to turn on or off together.

A better option in terms of synchronising the effects on the lights would be to send frames on multiple buses at the same time. You don't need to find a way to drive multiple MCU pins absolutely in sync to do this, just run through a list of output pin drive commands every Te (416us). The frames will only be offset from each other on the different buses by the time it takes to change the pin state.

Obviously this is easy to do if the frames to be transmitted are identical, but it is not much harder to do if they are not, you just need to pick up the next pin level from two/three different variables, one for each bus. Where this would become difficult is if these forward frames were queries, because you have to try to handle multiple responses on different buses at the same time. Personally I would doubt that is possible in a single core/thread, relatively slow MCU. But you could use the sequential frames technique for queries and the simultaneous technique for commands to get the best of both worlds, if you think the added complexity is worth it for the reduced latency between buses.

Not the answer you're looking for? Browse other questions tagged dali or ask your own question.