I am a complete novice with anything beyond simple wiring of guitar effects and kits. I have a unit, a Roland GR-55, that has a momentary switch built-in. I want to trigger this switch with a separate unit (Boss MS-3) that contains its own momentary switches, and which allows me to "assign" those switches via a 1/4" TS type jack. These switches work like regular passive momentary switches. If I want to control the GR-55 switch externally via this second unit, I need to isolate the circuits so as not to fry the CPU in the GR-55 in case of some ground fault or other issue I might not know about.

I think I understand SOME of how I might be able to use this in this particular situation: use the internal 9V DC power of the GR-55 to feed the DC +/- on the relay. Connect the two leads of the momentary switch in the GR-55 to the relay "open" and "common" contacts. This keeps the logic of the GR-55 isolated from the external switching system and the 9v supply.

What I do NOT understand is this: there is one contact on the transmit side that accepts a high or low level signal, but a simple momentary switch is simply a passive loop connector. Is there any way to use this kind of pre-fab circuit with a passive switch, or does it REQUIRE a second powered circuit/signal to trigger the relay?

If this board will not work, is there any other simple solution to this problem that would not require my having expertise in the area?

I think you're overcomplicating things with the pre-fab, does-all relay module. That module is probably this:

And to answer your original question, the part you're missing is R1 to bias it towards whichever DC rail you connect it to. I've drawn it as a pull-up because of tradition, in which case the controlling switch would go between IN and DC-.

But all you really need is this: 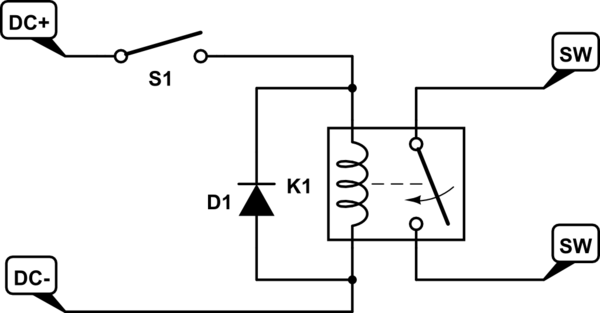 If the controlling switch S1 controls to the negative side instead, that works too; the order doesn't matter as long as you know it and design accordingly.

The relay itself provides the isolation, but I'm not convinced that you actually need it:

About the diode, D1, in both schematics: The circuits may work without it...for a while. But because you can't stop the current instantly through the relay coil, being an inductive device by necessity, it will generate whatever voltage it needs to keep that current flowing until the energy dies away. D1 provides a path to do that without requiring crazy high voltages (hundreds, maybe thousands of volts, briefly) that may eventually destroy a switch (and certainly a transistor, Q1), which the relay will happily do if that's what it takes to keep the current flowing. Any old diode will do, provided that its maximum reverse voltage is more than the relay's operating voltage.

Not the answer you're looking for? Browse other questions tagged switches opto-isolator or ask your own question.