How efficient are RGB LED strips?

I'm trying to figure out how dense of a strip to buy for my project. Everybody knows that the white LED cobs in bulbs are far more efficient than incandescent bulbs but I'm having a hard time finding information specific to the RGB LEDs in strips.

The closest I came was looking at this data sheet for WS2812B: http://www.seeedstudio.com/document/pdf/WS2812B%20Datasheet.pdf which states an approximate 2.1cd of luminous intensity for its combined RGB output.

The approximate average output of a 10W white LED bulb is 900lm so 45W worth would be 4050lm. That would mean that the RGB strip is less than half as efficient as its cousin white LED cob.

Is this conclusion anywhere near correct?

Costs of COB, RGB and phosphor

Those particular LEDs are individually addressible, and that brings a host of efficiency problems along.

The upshot is that individually addressable LEDs are optimized for building billboards and stadium TVs, not illumination.

Now if you want to go for the non-addressible RGB LED strips, they mostly cure these problems. No controller to waste power. Distribution is at 12V (somewhat better) or 24V (much better). 12V is better for powering a stack of 3 LEDs, you maybe lose 20% to the limiting resistor.

That said, the notchy R/G/B light is not going to look quite right to everyone, and won't have an excellent CRI. It's not white light, it's just designed to trick the eye into looking white. I would expect it to give the same kind of eye fatigue you get from looking at a screen for a long time.

On the upside, since the LED is internally doped to make that specific color, it's not using a phosphor to make the color, so it's not paying phosphor losses.

Now if you go with single-color white LEDs, those actually make blue internally and use phosphors to convert the blue into a full spectrum. Phosphors have an efficiency loss (and they cost money). That's why bluer light LEDs (6000k) are cheaper and more efficient than less blue LEDs (2700k).

There's one more angle (heh) to efficiency. An old bulb emits spherical light. It even illuminates the bottom of its own socket. But nobody wants to light a sphere. They typically want a cone or wedge ranging from 8-120 degrees. Historically you solved that with inefficient reflectors.

LEDs are the first to give a cone of light, of roughly 140-160 degrees. And that lends itself to optical (lens) aiming, which is near 100% efficient. Now you don't have to light up the wall, the sky, the neighbor's bedroom window - you can just light the subject. That is a gigantic efficiency advantage that you should make full use of.

Given your assumptions ≈2,000 lm would be correct. What you do not have is the efficacy (lm/w) and you did not include the losses due to current regulation or light bulb diffuser transmission loss.

which states an approximate 2.1cd of luminous intensity for its combined RGB output.

The problem here is they do not state at what current or view angle theses values are valid. The safe assumption is between 20 and 50 mA. 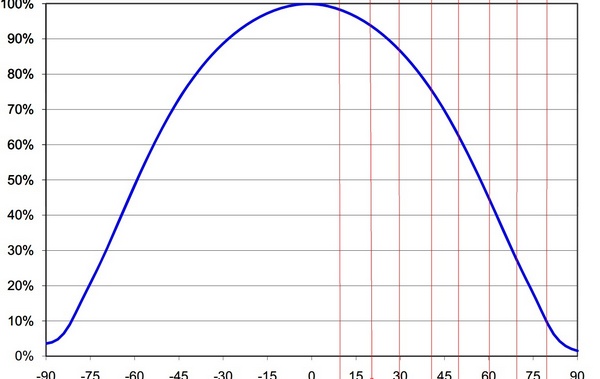 I assumed its sri to be 180 degrees

High and Mid Power Lighting LEDs are typically rated at a view angle of 120°. The RGB LEDs used in this strip are likely indicator LEDs where the angle is much less like maybe 10° (like those shown below). 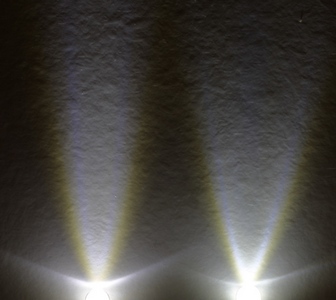 You datasheet is only for the LEDs and not how the manufacturer of the tape used them (e.g. LED resistor values).

Using the tape wattage use a loss of 46% for the resistors. The blue and green lose 40% to their resistors and the red 60%.

This presents another problem. Incandescent light bulbs are isotropic (360°) and LEDs are directional. Usually 30° is subtracted for the base obstruction. Even though LED bulbs are not isotropic their luminosity is measured the same.

There is NO WAY you can compare the efficacy of these RGB LEDs to white LEDs used in a quality light bulb.

You have insufficient data to guesstimate the lumens.

Even if you had all the data, you could still only guesstimate.
You would also need the transmission loss in the light bulb's diffuser cover.

The best way to determine the luminosity of the tape is to light up a dark room with the tape then light up the room with a light bulbs and compare perceived brightness.

I removed the disffuser covers from some light bulbs I use around my house.

They're different types of LEDs and not necessarily as efficient at producing visually-weighted light as the typical blue LED + phosphor combination.

There is another major factor- the forward voltage of the LEDs (depending on color) is around 2-3V, so about half the power is wasted in the (linear) driver circuit.

LED light bulbs use more efficient drivers, in part because they just need one big driver rather than hundreds of little ones.