This relates to max power transfer. Here's my circuit:

My goal is to try and find the value of R for the maximum power that can be delivered to it. Then I'll calculate that power as well. I have tried drawing the circuit with an a port on the left of the R resistor and a b port on the right of the R resistor and then trying to calculate Rth by shorting the independent voltage sources, but each time I do that and apply KCL or KVL I get equations that equal zero or not enough equations to solve for all the unknowns.

That's just Rth, I do not even know where to get started for calculating Vth for this circuit. My best guess is that I will ignore the R or load resistor and then apply nodal analysis or some other techniques but I'm not sure which one to use.

Sorry I can't show work or explain it more, this is as far as I can get right now. Any help would be very appreciated. Thank you!

EDIT: in case anyone is still reading this, I'm still stuck and every time I try to solve for Voc or Isc I get a system of equations that can't be solved.

Please see update #1 below. My original answer (immediately following this paragraph) assumes that the voltage controlled voltage source in your schematic has a certain polarity. If you read the article Dependent Sources and Thevenin's Theorem, their convention for dependent current source polarity is somewhat counter-intuitive (for me, at least), but applying that convention to your circuit does yield a workable solution, whereas my initial assumption does not, as I describe now.

I spent a couple of hours trying to find the Thevenin equivalent of this circuit, before it dawned on me that this is not necessarily possible. So I attacked the whole circuit with nodal analysis. 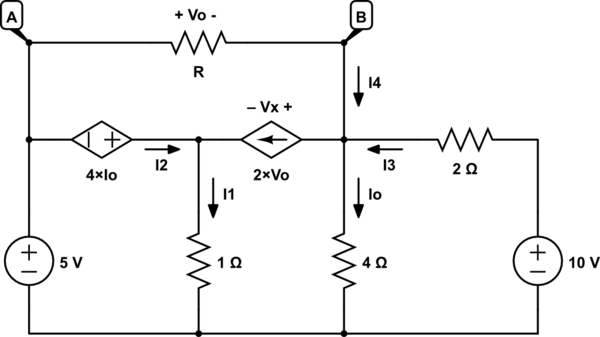 These are the equations I came up with (polarities are critical, so pay attention to the signs):

KVL applied to the 4 loops:

Without any differentiation, or any use of the Maximum Power Transfer Theorem, it's quite clear that the denominator approaches zero as R approaches 800mΩ. That's where current is at an impossible maximum of ∞A, and where power will be at a maximum.

Are you sure you copied the schematic correctly? Maybe I didn't.

Here's a working CircuitLab model, where you can verify this discontinuity: 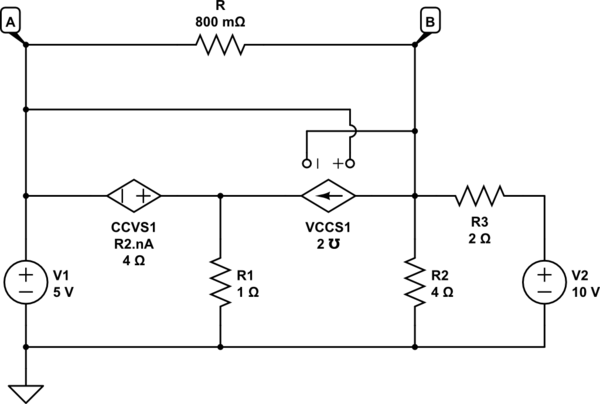 Until now I assumed that the current source produced current to the left when \$V_O\$ is positive, which may not be the case. Here I perform a complete nodal analysis for the case where we reverse this current direction, but this is only one way to find the maximum power in R. A better way may be to find the Thevenin equivalent circuit between A and B, which I'll do after. The equations become:

KVL around the four loops:

This time, solving for \$I_4\$ reveals this relationship, which does not suffer the same discontinuity:

That means, as far as I can tell, that there does exist a Thevenin equivalent, which I'll derive in moment. For now, I want to find algebraically the value of R which will dissipate the most power, which requires the power law:

I'll cheat with Wolfram Alpha to find the derivative, and set it equal to zero (to find maxima and minima):

Wolfram Alpha also provides the solution, which is:

To find the Thevenin equivalent circuit, we need to know the open circuit voltage, which looks like this, and where we need to find \$V_O\ = V_A-V_B\$:

The KVL and KCL equations for this are the same, with a couple of changes:

To facilitate the solution, using matrix manipulations, or inverse, or whatever technique you want to use, here are those same equations with all the unknowns in columns:

I'll cheat again, and use an online solver, which gave me this result:

We can find Thevenin resistance \$R_{TH}\$ by finding short circuit current. Since we already have the relationship between \$I_4\$ and R, this is trivial. Simply set R to zero:

However, that approach assumes you've derived the formula relating \$I_4\$ and R, and frankly that was a pain to do. So perhaps it would be easier to modify those simultaneous equations one more time, to find short circuit current via a matrix solution instead.

That's the same result for \$I_4\$ short-circuit current as we predicted before, and will of course yield the same \$R_{TH}\$. By the Maximum Power Transfer Theorem, clearly the load resistor R should be \$ R = R_{TH} = 363.6m\Omega \$ for it to dissipate maximum power, which agrees with the algebraic result we found earlier.

Here's a working CircuitLab model to see for yourself that it's all good. Notice that I've reversed the + and - connections on the current source, to correct the current direction, and resolve the discontinuity problem I encountered when I originally answered this question: 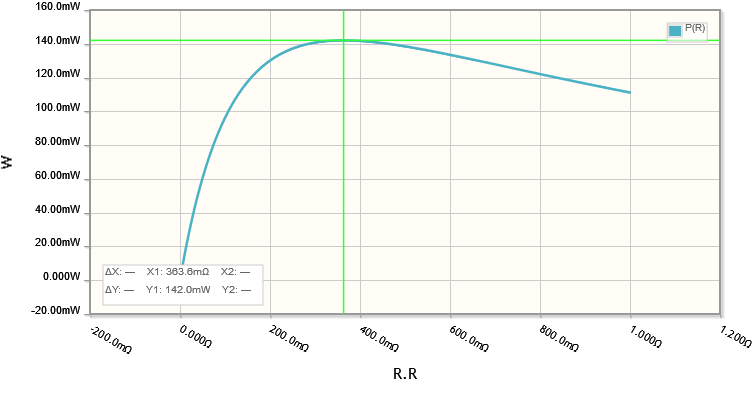 Not the answer you're looking for? Browse other questions tagged power circuit-analysis or ask your own question.

1
Calculate Thevenin voltage in a Common Emitter Circuit
1
Finding Thevenin equivalent circuit and using that circuit when terminals inside circuit
0
Calculating Thevenin voltage and Norton current for complicated circuit
1
Writing the Nodal and Mesh equations for large circuit and large supermesh
1
Finding Norton voltage and resistance and max power
3
Why do we not include the current source when finding the Thévenin equivalent impedance?
0
How can the maximum average power transfer be negative in a power delivery circuit?
0
Why will i calculate the wrong power ,but right loading resistance in this circuit?