How to measure the angle of a rope on a moving airplane?

I've got a simple rc plane which I want to fly on a tether. The tether is attached to the bottom of the plane like this: 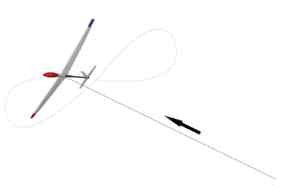 I now want to know what the orientation of the rope on the bottom of the plane is relative to the plane.

Some idea's I had:

I've got an IMU which I'm building into the plane (together with a raspberry pi). I guess I could also attach an IMU on the rope and calculate the differences between the two, but since the plane will be moving a lot I guess this wouldn't be the easiest/best option.

Another idea I had was attaching an infrared light on the rope and using an infrared camera on the bottom of the plane with blob detection to find the location and calculate the angles of the rope using that location. I'm not sure whether this would work by day though, and it might have some other disadvantages that I'm unaware of.

I could also attach two rotary encoders on the plane and attached two very light wires on the rope. It would enable me to measure the distance/angle relatively precisely, but it would also make it quite fragile when landing the plane.

I don't need very high precision. If the sensor on the rope would be a meter away a precision of 10cm would be fine. Also, I could average the measurements of the four sensors and I guess that would make it more trustworthy.

All tips and ideas are welcome!

@DaveTweed said this was an XY-problem (which I had never heard of, so I looked it up). So let me explain what I want to do. A company called AmpyxPower is flying RC-planes on a tether to make it create a pull on the tether. That way they can generate energy with a generator on the ground. I'm curious if I could build such a system. I know I'm really far from reaching that point, but the first part would be flying the plane on the tether in the wind. After this, I want to make it be able to fly in an eight-figure autonomously. I'm currently writing a first version of the code that should do this. It's in very early stage, but I'm just trying to collect the data that it needs. As said I now have an IMU, GPS (although I'm not sure how much that is going to help me) and I also want to know how the tether pulls on the plane. For that reason I want this information.

I'm not entirely clear on the scale of the plane and the forces involved, but from the sound of it the first version is going to be something like a 1:12 or 1:24 scale plane? Also, do you need both axes or will one axis do?

I would like to present the "load cell" approach. You would need to work this into the mounting plate for the hook on the bottom of the plane; for example, four strain gauges, one in each mounting bolt. You might have to mount them "upside down" since they tend to prefer compression to tension. This will tell you the force applied, while not requiring anything outside the plane.

Finding the right parts may be a bit of a problem, but fundamentally they're the technology used in $10 digital kitchen or bathroom scales, so for a prototype you might just be able to grab them from there. They're also the tech used by the Wii Balance Board to determine how people are placing their weight.

In re the power generation to the skeptics: this is a variant on "kite power", or an answer to the mathematics that suggests that a one-blade wind turbine is most effective. All it requires is putting an aerofoil into the wind stream and extracting energy from it through lift. The available power increases with wind speed, which increases with altitude.

Not the answer you're looking for? Browse other questions tagged sensor infrared proximity-sensor robotics or ask your own question.