I have a LT8330 Boost converter issue. As the output load decrease, this boost converter will use a burst mode, switching between sleep and activity, and thus decreasing the switching frequency. 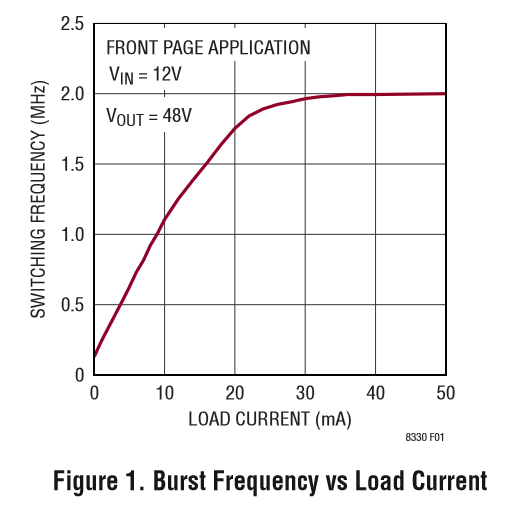 The DCDC converters I used to work on decided between PWM (Pulse Width Modulation and continuous switching) and PFM (Pulse Frequency Modulation or Burst mode) operation based on the current through the switch.

From that I conclude that when the current through the switch exceeds 240 mA, the converter switches to PWM.

When the converter is in PWM, the switching frequency is 2 MHz, which is the frequency of the internal oscillator (meaning it will not be exactly 2 MHz).

When the converter is in PFM (pulsed mode) when it switches (during a burst) the switching frequency will be 2 MHz, same as in PWM. However, it depends on the load current, input and output voltage, inductor value etc. how often there needs to be a burst. When the load current is small (for example 10 uA) a burst might be needed only once per second (just my guess) but at 50 mA much more bursts are needed.

So it is nearly impossible to predict how often a burst is needed, the system monitors the output voltage and initiates a burst when needed.

Not the answer you're looking for? Browse other questions tagged dc-dc-converter boost or ask your own question.