Can the negative impact of mixing new and old batteries be mitigated?

But there are various options how they can be mixed, and I guess there are use cases in which certain ways of mixing can be justified.

In my off-grid solar system I am using quite good lead-carbon batteries capable of surviving 4000 cycles when discharged up to 50%. Their Partial State of Charge (PSOC) wear is minimal. Also they can be charged 2.5 times as fast as traditional lead acid types. At the moment I am running 12 of them — connected in 3 parallel quartet series. I am giving them quite hard times — discharging down to 50% every night and topping up to 100% during daylight.

Now I want to scale the array up — add another quartet or two. Say if I do it this way it perhaps would be quite bad: 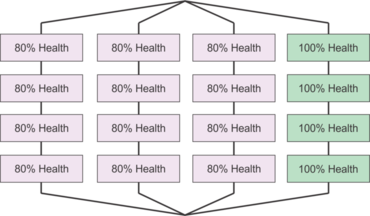 But a gut feeling tells me I might get away with this: 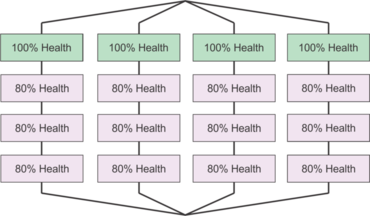 I am sort of lazy to do the calculations vs ask this question. Is my gut feeling wrong or right? Is there any difference between the two options above? How much will the new batteries suffer if the old ones are only say 20% worn? Should I even think of scaling the array up, or should I just wear it out completely and buy all new batteries thereafter?

There is a great deal of literature in this space that is becoming more and more important as life extension and secondary markets for these systems grow.

But of course, generally it depends.

If the chemistry provides a stable voltage-SoC relationship, then this mixing can work without extra electronics. In that case, your gut is wrong and the all-in-one-stack option is best. That's because you have two scenarios to consider: charge and discharge.

During charge, the weaker batteries will reach higher states of charge quicker. Provided the voltage-SoC relationship is stable, that means they will automatically accept a smaller proportion of the charge current as the stronger batteries remain at a lower internal voltage for longer. If this were not to happen the weaker batteries would overcharge.

During discharge the opposite happens. The weaker batteries will reach lower state of charge quicker but the arrangement will automatically compensate by the stronger batteries taking a greater share of the load.

If instead you were to go with your gut, you'd find the weaker batteries in the string are both overcharged and undercharged as they are forced to take the current that the stronger batteries are capable of.

When it comes to scenarios where you don't/can't know which batteries are the weaker ones, then you have to turn to individual compensation electronics. There are various systems for bypassing individual batteries in a string to compensate for their more rapid changes in State of Charge. Again, they generally rely on the Voltage-SoC relationship being stable. If it is not (eg. Lithium based chemistries), then generally a coulomb-counting approach has to be used.

I am sort of lazy to do the calculations vs ask this question. Is my gut feeling wrong or right?

It's wrong, the problem is if the cells do not match, more current (usually) gets dissipated in the unmatched cells.

Is there any difference between the two options above? How much will the new batteries suffer if the old ones are only say 20% worn?

The problem is in the Depth of Discharge, it goes down over time. In either configuration the batteries that still need to be charged will show a lower voltage then the ones that don't if the batteries are not matched. This will at minimum waste energy as heat, at worst it will lead to failures in the battery. 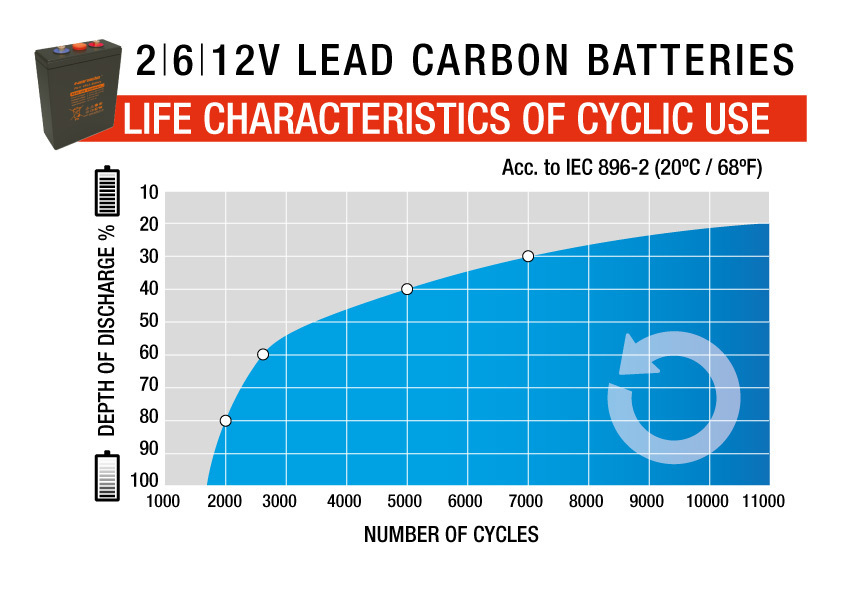 Should I even think of scaling the array up, or should I just wear it out completely and buy all new batteries thereafter?

I think the best thing to do would to keep the old batteries on their own string with their own charger and leave them matched to each other.

Not the answer you're looking for? Browse other questions tagged batteries battery-charging charging or ask your own question.

24
Why is it bad to mix new and old batteries?