How to read a schematic with capacitors

The most important problem I have is trying to figure out the purpose for all the different capacitors.

I know that I should split the circuit in different functional parts but I still have this kind of problem.

Would you please tell me how to read a schematic specially when capacitors are involved?

For instance this very basic schematic about a blinking LED. 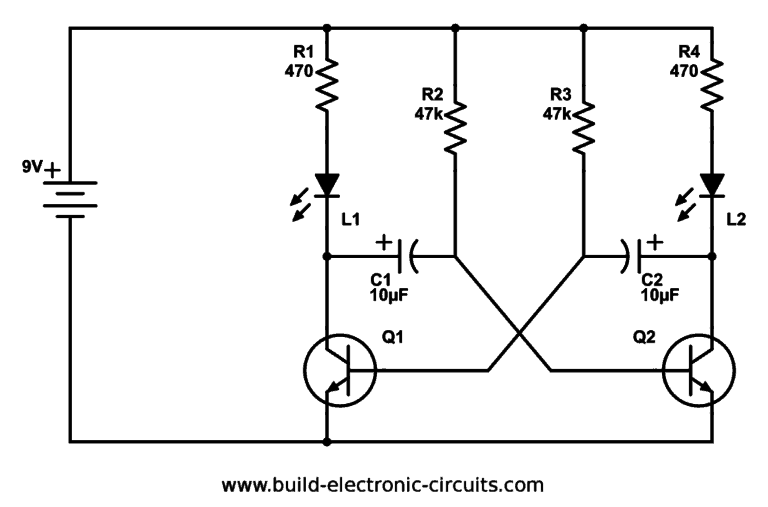 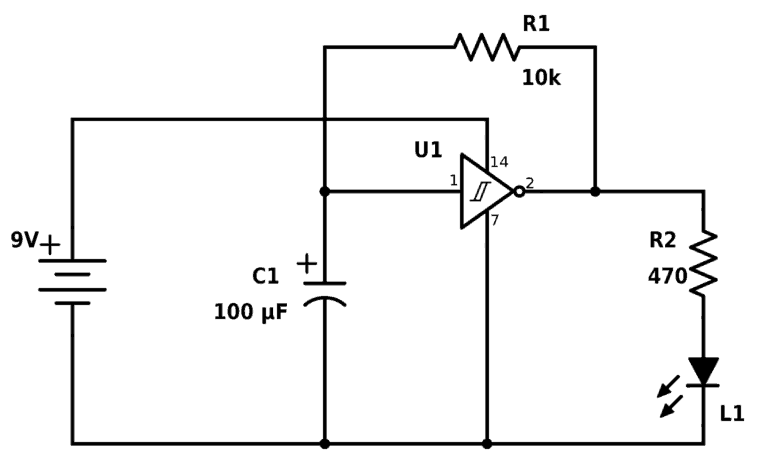 There is no one set answer; capacitors can perform several different functions in circuits. In all cases there is charging and discharging going on, but how that affects circuit operation depends on the circuit.

Both of the schematics you posted have capacitors performing an R-C timer function. A capacitor is charged up or down through a resistor until the voltage across the capacitor passes a certain value, often called the circuit's trip point. When that happens, the circuit does something. Exactly what is different in the two circuits, so pick one and we can drill down into its function.

You have set for consideration a very interesting and important topic - how to understand circuits. It is something too large to be answered here... but still let's try.

I have been doing this myself all my life and most of my time has been spent discovering and explaining the general ideas (concepts) behind the specific circuit implementations... because that is the only way they can be truly understood. In contrast, most of the people (especially here) explain the specific circuit implementations without seeing the general ideas behind them... as the saying goes, "they don't see the forest for the trees". The result is many questions about the same circuits.

That is why, in 2002, I dedicated to this endeavor (understanding circuits), my site Circuit Fantasia (How to understand, present and invent circuits) and especially its part Circuit stories on the whiteboard and my classes on Analog Electronics. Later, in 2007 I started the wikibook Circuit Idea and involved my students in creating it. Finally, in 2020, I began creating my blog Circuit Stories where to collect my resources. Also, I dedicated all my contributions in EE forums to understanding circuits. I think these resources can help you really understand circuits.

So, to understand a circuit first at all means to see the basic idea, the concept behind this mixture of components. For this purpose, you can use various heuristic means - intuition, imagination, visualization, common sense, analogies, emotions... and, of course, accumulated previous knowledge. Then, when you decide to implement the circuit, besides these "qualitative means", you will need "quantitative means" for its calculation and a lot of "details"... but at this stage you do not vitally need them.

I know that I should split the circuit in different functional parts...

Exactly! We begin understanding with looking for something known - more elementary circuit building blocks (subblocks) and basic ideas (concepts). I have illustrated it in my answer to a question about an ingenious 2-transistor circuit. Let's now do it with your circuit...

How to understand capacitor circuits

First, you need to create a functional idea of the capacitor. For this purpose, I highly recommend you get acquainted with my story in a related answer. I have written it more as a "fairy tale" than as a "serious" technical description to convincingly describe the capacitor properties used in its various applications. Here is a short list of typical applications extracted from there.

See also one more answer of mine.

How to understand multivibrators

Then, we have to see the specific capacitor application in these circuits.

In these circuits, the capacitor acts as an integrator - a device that converts the invisible time into a more real voltage. So, the voltage across the capacitor slowly changes when a relatively small current flows through it… and we use it as a measure of time.

The capacitor acting as an integrator needs current but there is only voltage (produced by the power supply of 9 V in your circuits). That is why, they converted it to current by connecting a resistor in series (R2, R3 in the first circuit and R1 in the second one). Thus an RC integrating circuit is built by cascading two sub-building blocks - voltage-to-current converter (resistor) and current-to-voltage integrator. See, for example, one more story of mine - a class exercise conducted with my students in 2004.

The problem of the humble RC circuit is the current does not stay constant but gradually decreases. As a result, the voltage slows down and the famous exponent appears… but it does not matter in these timer applications (it can be even useful as I have shown in [my answer] (https://electronics.stackexchange.com/a/548167/61398)).

In other applications, the voltage must change linearly through time and then it is compensated. I have dedicated many materials about this great idea; see for example, my Wikibooks story and another answer of mine.

The two circuits are examples of the so-called relaxation oscillators where to create a time interval, the capacitor voltage is compared to a reference voltage (threshold) by subtracting both voltages in series and applying the difference to the input of the amplifier... and the process begins again.

In the first circuit, an ingenious circuit solution is used - the humble base-emitter junction of the transistor serves as a comparator. The clever trick is that first, the capacitor C1/C2 is charged through the forward-biased junction of the transistor Q2/Q1 with a current limited by R1/R4; then the capacitor voltage is applied with an opposite polarity to the backward-biased junction of Q2/Q1. As a result, no base current is consumed from the R1C1/R4C2 integrating network and the capacitor is recharged undisturbed. More advantages are that the capacitor voltage range is two times higher than the supply voltage and the transistor switches on in the middle (0 V) of the range. I have thoroughly considered this process in another related answer about such a timer.

In the second circuit, the comparator has two voltage thresholds and the capacitor voltage "travels" between them.

So, in the first circuit, there are two timers which act sequentially one after the other... and their capacitors are recharged in the same direction. In the second circuit, there is only one capacitor (timer)... and its direction is periodically reversed.

Both circuits must hold their state while the capacitor is recharging. For this purpose, they are implemented as latches by means of self-reinforcing (strong) positive feedback.

In practical circuits with ICs, there's a fourth function.

36
How were schematics drawn before CAD?
19
What's the intuition for reading transistor/resistor circuits?
5
What does a capacitor do?
3
What is the purpose of the opamp in an integrator circuit?
3
Starting on electronics from zero - transistor timer
3
Roles of the coupling and bypass capacitors in a CE transistor
2
Classic multivibrator circuit and LTSpice, why is there reverse voltage on base even with diode?

20
Industry Practices for Schematic Design?
5
Polarized capacitors in common emitter amplifier
8
What do the capacitors on IN and OUT of an LM7805 voltage regulator?
1
Powering SIM 900 gsm
3
How and when should I split a schematic component into multiple parts
1
Orcad Schematic Capture. Instances vs Occurrences
8
What are the purposes of these capacitors?
0
understanding components of schematic