Wire broke off and stuck in a header

I'm working with an Arduino, and one of the stripped portions of the wire broke off at some point and managed to get pretty wedged into the 5V pin slot. Obviously, this wouldn't matter as much for a GPIO pin, but I sort of need to use the +5V port.

Tweezers are out of the question; I've tried both non and slanted-tip. Currently a needle is the only thing that will really fit in, but i just end up pushing the wire around more. Tried using a very small magnet, but it isn't neodymium so likely isn't powerful enough.

Here is a picture of the microcontroller with the wire stuck. The wire is not above the header itself, it's entirely pushed into the header: 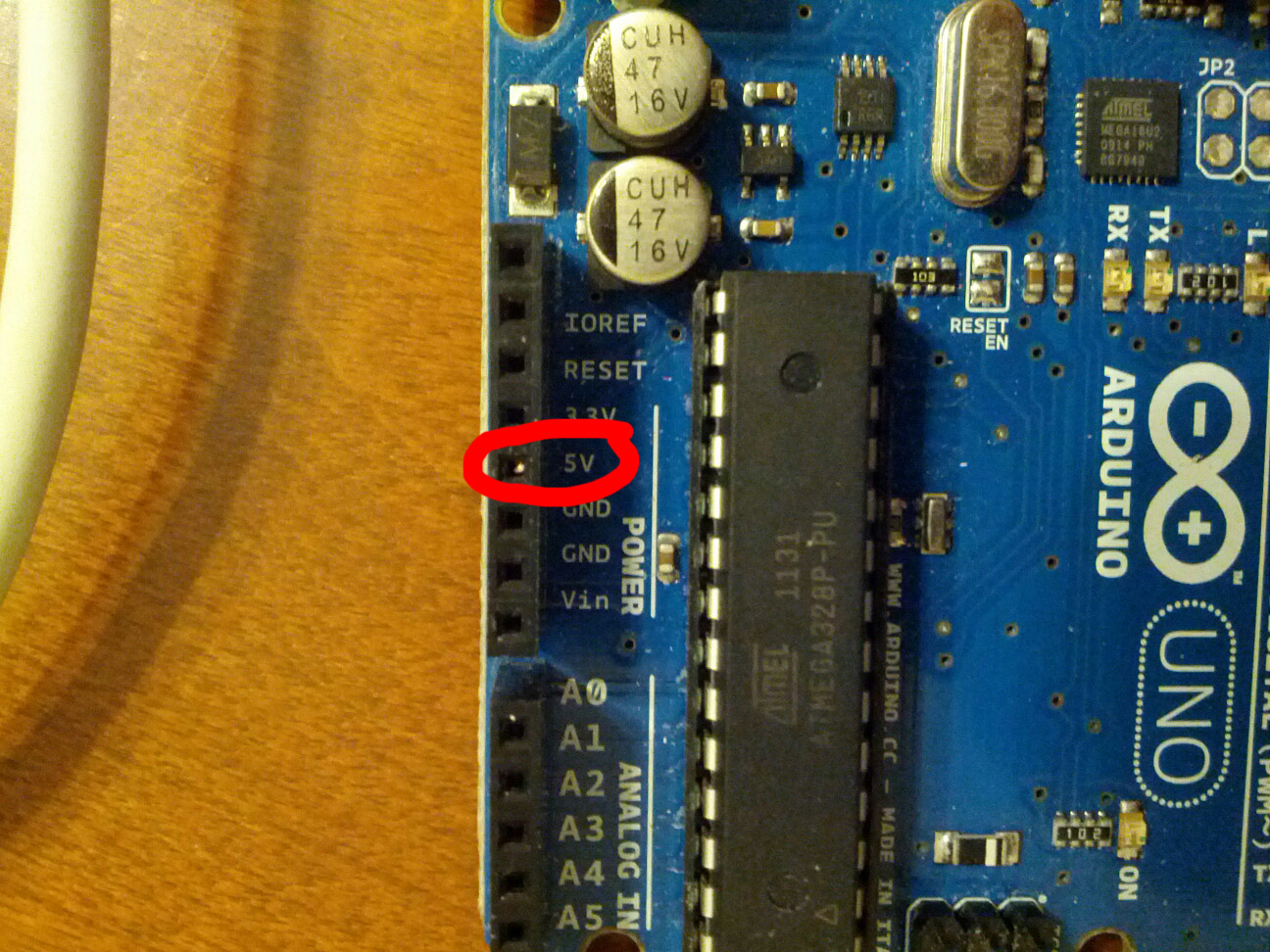 Got the wire out by using a combination of techniques. I did not have access to tweezers that were small enough to get in, but I do have a nice soldering station in the lab. Since the piece of wire was so small (see picture), with one of my instructors, chipped at the header a bit with a pair of cutters and then used a wire and some tin to carefully attach the wires together. If I needed the header to be intact, the best bet would have been tweezers or just putting a new header on, but I don't care if there is a very slight cosmetic flaw on the 1 port on the Arduino.

Picture of the stuck wire segment still soldered to the extraction wire:

Be careful not to solder the pin into the socket!

The metal part of the female connector (in which the wire is stuck) looks like a tuning fork. You don't see the fork, because it's surrounded by the black plastic. The fork should be in-plane with the connector. Try to make a hole in the plastic on the side of the connector. Perhaps, you could make the hole with a hot nail or a dremmel. The hole should be near the bottom end of the broken wire. Try to push the broken wire with a needle through the hole.

Alternatively, remove plastic from the top of the cavity with a Dremel tool. Eventually, enough of the broken wire sticks out and you might be able to grab it. Carefully.

Be prepared to de-solder and replace the whole connector. If it comes to that, you can cut the connector apart, which will make de-soldering easier.

My best luck with removing broken wires from breadboards and headers of this nature is to just use the tip of a jeweler's screwdriver, or the tip of one of the ends of my pair of diagonal cutters to just drag the wire out. You may nick up the header's plastic a little bit, but it is definitely easier to do this before you replace the header in case you can get the wire out.

My standard technique for removing a broken pin or wire from that style of header is to simply pry the plastic body of the header off of the pins. You will notice that that the header body is actually easily removed if you pry gently at one end, then the other. Rock the body away from the board.

Flush-cutting wire cutters work well for this if you have decent access to the ends of the header body. The tapered wedge formed by the cutting edges allows the cutter to get under the plastic easily. Note that you hold the cutters closed just enough to grab onto the plastic. You don't want to use enough force to risk damaging the pin when the header body slides up.

This technique is far less damaging than some of other techniques mentioned here. It works so well because the header pins are simply pushed into the plastic body. As a result, it is trivial to remove the plastic body while leaving the pins soldered to the PC board, then pushing the header body back onto the pins.

Since you can get a needle in next to it, I would try a very small amount of super glue on the needle. Put it in, let is sit for a long time, and then you may be able to get it to come out.

I'd also consider abrading away the plastic top of the header with a dremel and an diamond disk so that I could get down to the broken wire.

This happened to me today, I was using a wire from the cat-5 cable as I could not find any place to buy single core 22 gauge wires here. I might had damaged the wire core while stripping it with a cutter. It just broke off and got stuck inside the GND pin on my Arduino Uno.

First thing I did was google, which took me to several pages, including this one. I didn't think using super glue was a good idea, as there was a good change of making the problem worse in case the glue travels down the wire that's stuck. Got to admit it did tempt me a bit though.

Then I remembered that I had this long pin-like thing with a slightly bent tip ( I had accidentally dropped it on the ground, pointy side down ). I don't know what this long needle like thing is called, but it had a fine and sharp tip but a broader body that you can grip onto. This makes positioning the 'bent' pin to 'dig' out the wire that's stuck inside a hell lot easier. At least in my case.

Knocking the header onto something solid like the edge of a table can also work. Face the header with the wire in it downwards and hit the edge of the table so that the connection with the stuck wire is hanging just over the edge. Don't hit it so hard that you break the board but as much as you feel is safe. It might not seem like the wire, that is normally stuck in tightly, will respond to a few (/quite a few) good knocks but it has worked for me beautifully in the past (and just this second...). The idea behind it is that you are creating very high G forces for a fraction of a second (~100g) and the wire moves small amounts each time until it finally comes free (or out enough for you to grab it).

I use the smallest drill that I have (#60) in a pin vise and very carefully twist the vise and bit into the header hole along side the broken pin. When it feels like the drill has bit into something solid (not plastic), I carefully pull the vise and drill bit up out of the hole and the broken pin usually comes along. A #60 drill bit is easily broken off in the hole, so be gentle.

jcatjcat
1
\$\endgroup\$
Add a comment  |
Highly active question. Earn 10 reputation (not counting the association bonus) in order to answer this question. The reputation requirement helps protect this question from spam and non-answer activity.

Not the answer you're looking for? Browse other questions tagged wire breadboard repair header or ask your own question.