In another post I ask about an ultrasonic radial beacon finder: Does it exist: 360 degree ultrasonic receiver/beacon combo

Assuming it exists or I can hack one of those together, would it be possible to have the beacon emit multiple frequencies to detect the distance from the base(robot)?

Let me explain better. As the receiver spins in a circle it listens for specific frequencies. Theoretically, the beacon could output 2 frequencies that have different maximum distances.

When the receiver detects the longer range frequency, if it doesn't detect the shorter range one, then the object must be outside the short-range radius.

Ideally, I would like to be able to have multiple radii in 5 foot increments up to 20 feet(ish). The small radii are why I ruled out RF.

So now that my use-case is explained: Do different frequencies have different ranges?

Edit: To clarify Use-case, both the robot and the beacon will be mobile so fixed base stations are not an option.

The sensitivity of ultrasonic transducers does vary over frequency. The following example is from a Kobitone 255-400PT16-ROX datasheet. It would also be fair to assume it would fall further outside the normal operating frequencies that are shown below. 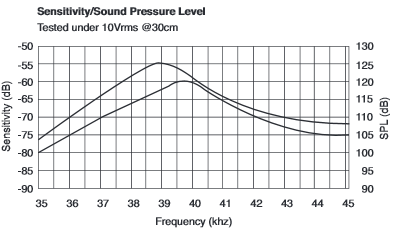 However in my opinion using it do determine distance isn't likely to be a good solution. When operating outside normal ranges you may find differences in performance between parts but for experimental / hobbyist purposes I see no harm in trying it as a simple solution.

Another way you could go about it is to change the amplitude of the signal at the ultrasonic emitter end and encode it with a digital signal that indicates the transmission level used. That does get quite a bit more complex though. If you wanted to take a look at going that way perhaps the VirtualWire project would be worth a look at for encoding and decoding the digital signal.

I just answered a seemingly unrelated question here:what is the best method for device location services, that I think may be relevant.

If I understand your question correctly, you want proximity sensors to measure the distance between a robot and a reciever. You may want to reconsider RF, since systems based off of it can be fairly accurate. The project site is here:

You might be able to modify the code to work to your purposes. Maybe setting it look for the measured amplitude of the signal and calulating the distance from that. I would build in some way of calibrating the whole thing. This could probably be scaled up to great size and accuracy if you used multiple recievers. Also, using a triangulation based approach may be useful. I'm not sure if this will be acurate enough, but it might be somewhere to start.

Also, you could consider a machine vision based approach. You might be able to rig a Kinect to recognize your robot if you put a distinct marker on it. Then, you could just program it to measure the distance to the marker. Then you would have to find a way to transmit the distance information to the robot over the air. Only downside would be limited range (approx 11 feet). Microsoft released a computer version, and there are lots of online resources for it:

Conversly, you could put the kinect on the robot and have the robot measure the distance to the marker. In this scenario, instead of having a beacon in your pocket, the Kinect's computer vision would recognize your body and you would be the 'beacon'. This way, you wouldn't have to transmit any information to the robot over the air. Only downside is that the robot would have to have some pretty sophisticated processing on board. Theoretically, you could put the kinect on the robot, have the robot transmit the raw kinect data to a remote computer for processing, and then transmit location data back to the robot, thus avoiding having to put major processing power in the robot.

I hope I've given you a few good ideas for alternatives and I wish you luck.

2
Does it exist: 360 degree ultrasonic receiver/beacon combo
1
what is the best method for device location services