When should you use a fuse?

When is it actually practical to use a fuse? Like lets say your building a robot using an Arduino.....what area would you want to protect the most with a fuse?

I mean do they even make fuses that small (5v's and such) and how do you go about "connecting" them to wires, since the smaller ones seem to be a solid cylinder

You need a fuse if you want to limit possible damage if something got shorted. This is defenetly possible with non-protected LiIon batteries for example.

For low-voltage applications there are self-healing fuses (often found on motherboards, especially for USB protection).

For non-autonomous robot I would just have 1 fuse on battery, so that it would not burn.

For autonomous one you might need one per each power consumer + sensors to react on shorted engines e.t.c.

The use of fuses often springs from an FMEA (Failure Mode and Effect Analysis). You evaluate what the consequences of certain failures are, and how you can avoid them from turning into disasters. A failing component may cause a short-circuit, which in turn may lead to overheating, and eventually a fire.
A simple solution is to protect the device as a whole by placing a fuse even before the mains transformer, so that this is protected as well.

When I worked at Philips Audio we often would use PCB solderable fuses (a smaller version of these). They look a bit like small cylindrical capacitors. They have the advantage that electronics hobbyists won't go about replacing them; you have to recognize them as being fuses to begin with.
Why don't you want the fuse replaced? Most of the time there's a good reason why a fuse blows: some defective component. If you just replace the fuse and power the device again you may destroy more components, making the problem even worse and make a repair more costly.

While there are low-voltage fuses (like the PTH ones we used at Philips) you don't really need them. The voltage rating of a fuse refers to the separation when they're gone. You can perfectly use any 20x5mm glass fuse for lower voltage applications.

I would connect the fuses inline, if you can't make your own board with through-hole fuse holders. Something like this: http://www.jameco.com/webapp/wcs/stores/servlet/Product_10001_10001_109330_-1 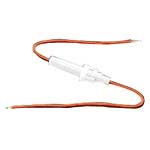 13
How do I choose a fuse? Fusible Links vs Polyfuse?
4
Designing with fuses…when to use?

6
Multiple Ultrasonic Rangefinder Question
11
Should I use slow fuse or fast fuse?
0
Making my own kotatsu
0
Strategy for a learning lawnmower robot, and choices of motors
1
Is there a standard stating how fast a fast fuse is, how slow a slow fuse is?
2
MAX6675 and 50Hz noise
2
fast or slow fuse in transformer
0
Fuse needed to prevent too much current draw in DC motors?