Suppose I want to have two battery-powered MCUs inside an (unmanned) aircraft communicate with each other via RS-485. If those MCUs are powered from the same battery, or if their grounds are connected, both MCUs should be able to communicate since they are both on (nearly?) the same ground potential. This should especially hold true, when the aircraft is small and interconnecting ground-lines are short and low-impedance. Correct?

Now, suppose one MCU is powered by a separate battery with no ground connection to the others. In my understanding the different between the two battery grounds is arbitrary - could be some mV (in which case communication will be possible) - or much more (in which case the RS-485 transceivers break). Correct?

Provided above points are correct, I figure that I either need an:

I'm more inclined towards the last option due to the lower part count and complexity. Yet, I'm also interested in other suggestions.

Curiously, while there are many non-isolated DC/DC modules available in any form and power, I've yet to find a small, low-profile isolated DC/DC regulator of ~100mA output current. Can someone suggest a suitable part?

Clarification I'm looking for a small footprint (< 10mm x 10mm), low-profile (<2.5mm) part. All those 5W bricks are way too large for my purpose, considering that the transceivers require <100mA of current. Note that I've no regulatory requirements since we are not dealing with high voltages. Isolation is only needed to protect some components from harm. Therefore we really don't need too large packages that - as I understand - are mostly there to achieve enough distance between isolated pins.

You can connect the two grounds if they're truly floating wrt each other. Then the CM range is controlled and you're back to the original situation. Several volts of difference is okay (-7 to +12) so any reasonable connection over a short distance should meet this requirement. A high CM range transceiver would still require some kind of control of the common mode voltage.

Isolated DC-DC converters are very common, just do a parametric search at some distributor such as Digikey. I see 176 pages (25 per page) of different isolated DC-DC board-mount modules before filtering for required power and for input and output voltages.

Edit: One of my favorites is the TI (nee Burr-Brown) DCR01 series, which has an LDO (no problems out-of-spec voltages with light loads) and fits in an SOP that is 2.5mm high. It can supply 1W, so 200mA at 5V. 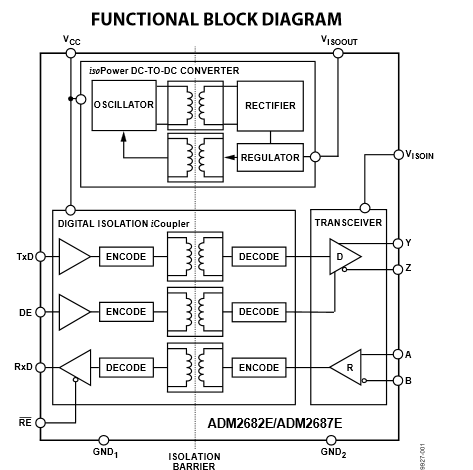 You should connect the isolated ground to the ground on the remote system to control the common mode range.

I guess the question is a bit old now, but I think the LTM2881 (http://www.linear.com/product/LTM2881) fulfills your requirements.

Edit: In response to the comment, I should have pointed out that this part is a complete isolated RS-485 transceiver including DC-DC converter with footprint 15x11.25mm and height 2.8mm. So actually it is almost the same size as the DCR01 part mentioned in the reply above, but includes the RS-485 transceiver as well. Price of the LTM2881 is somewhat higher than the DCR01, but total solution cost would probably be comparable.

Not the answer you're looking for? Browse other questions tagged isolation rs485 digital-isolator or ask your own question.

8
Running CAN bus with RS-485 transceiver
1
Microcontroller to PC via USB - do I need to use isolation?
4
RS-485 best isolation practices
6
Purpose of this oscillator (74HCT14-based) on RS-232 to RS-485 converter?
1
MAX485 suddenly drawing too much current and output voltage levels are not right
1
Rs-485 isolation
1
Grounding in CAN / RS485 Busses