I know that aircraft sometimes employ a 400Hz AC system to save weight on transformers, so I'd imagine that spacecraft might employ a similar technique. I'm wondering if anyone in the aerospace field can confirm 400Hz or higher frequency operation in space.

The situation with Voyeager is more complex than what was said in another answer above. Here are the details from NASA:

Power from the radioisotope thermoelectric generators is held at a constant 30 volts DC by a shunt regulator. The 30 volts are supplied directly to some spacecraft equipment and are switched to others in the power distribution subassembly. The main power inverter also is supplied the 30 volts DC for conversion to 2.4 kHz square wave AC used by most spacecraft subsystems. Again, the AC power may be supplied directly to equipment or can be switched on or off by power relays.

Among the users of DC power, in addition to the inverter, are the radio subsystem, gyros, propulsion isolation valves, some science instruments, most temperature control heaters and the motors that deployed the planetary radio astronomy antennas. Other elements of the spacecraft use the AC power.

There are two identical 2.4 kHz power inverters -- main and standby. The main inverter is on from launch and remains on throughout the mission. In case of malfunction or failure in the main inverter, the power chain, after a 1.5-second delay, is switched automatically to the standby inverter. Once the switchover is made, it is irreversible.

A 4.8 kHz sync and timing signal from the flight data subsystem is used as a frequency reference in the inverter. The frequency is divided by two and the output is 2.4 kHz. The AC regulation is accurate to .004 percent. The 4.8 kHz timing signal is sent, in turn, to the computer command subsystem, which contains the spacecraft's master clock.

EDIT: And, yes, the AC was 50V RMS. Found a diagram in a later NASA conference: 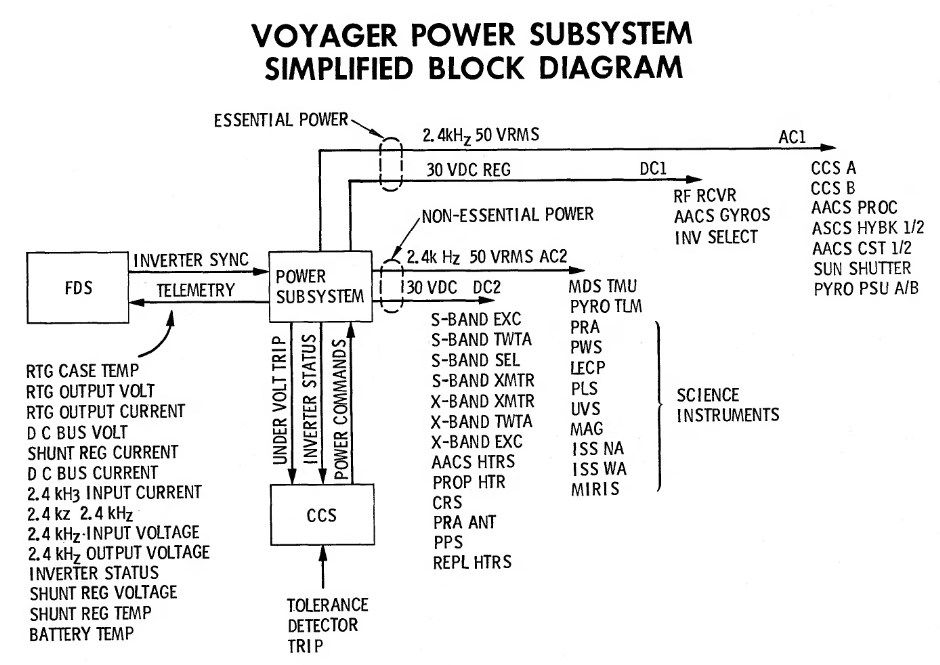 From that conference, Viking was even more complex having additional 400 Hz AC inverters. There's also mention in that coference of Galileo having the same redundant inverter configuration as Voyager (but no other details, presumably because it was just in the design stage then).

From a GE Voyager design document, it seems Voyager was initially designed similary to Viking, having some 400 Hz busses, but was revised to use only 2.4 KHz AC in the last iteration. The reason for the use of 400 Hz equipment is obvious, i.e. sharing parts with aviation equipment. I'm guessing the 2.4 KHz equipment was reasonably easilly derived from the former (as the frequency is a multiple), but I haven't found the rationale for 2.4KHz AC said explicitly anywhere yet.

Here are the details on Viking, confirming use of some 400 Hz power buses: 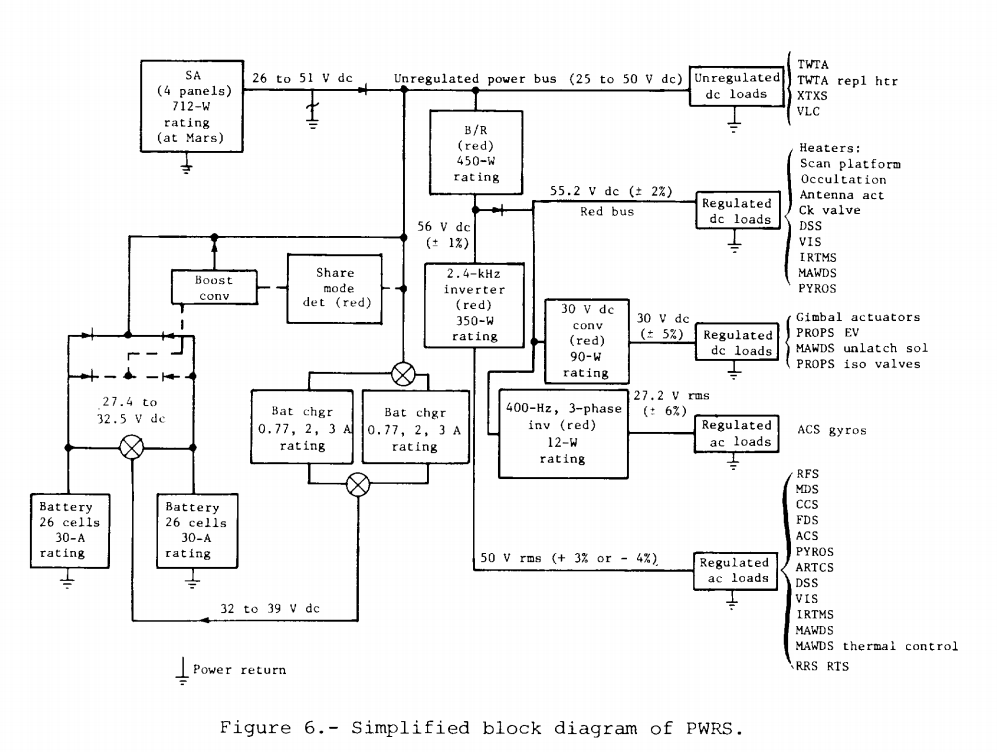 To investigate the use 400 Hz AC, it's worth looking at a Mariner V report:

So it seems that (three-phase) 400 Hz had some, but relatively limited use in NASA craft: mostly for gyros and attitude control, while they also used 2.4 kHz single phase AC power for many more subsystems. I cannot find any mention of 400 Hz equipment in Galileo / Magellan documentation (which is unfortunately pretty spread out). So it seems that the 400 Hz AC equipment, being more niche was phased out first, probably around Voyager's time.

I've built payloads for a dozen suborbital shots and one satellite. AC was never used. As our missions were not really long-duration interplanetary trips, we used commercially-available DC-DC converters built to aerospace standards. The satellite, I believe, is still functioning after about 6 or seven years. Converter frequencies were, I believe, about 550 KHz.

What NASA does for its missions, I don't know, although I expect they roll their own.

Most spacecraft use DC power distribution systems with high efficiency DC to DC converters. This is because all power sources on spacecraft are DC - solar arrays, batteries, fuel cells, RTGs, etc. Airplanes use generators connected to the engines for power, so using AC is straightforward. On a spacecraft, since it always starts with DC, there is no point in converting it to AC for distribution just to convert it back to DC later. (Well, switching power supplies do convert it to AC and back internally, but it is not distributed as AC). Much like common switching power supplies in computers and other consumer electronics, the DC to DC converters on spacecraft will operate at high frequencies (kHz or MHz) to save space. However, there is a tradeoff at some point against switching losses. I would imagine that in some cases they will use a lower switching frequency (at the expense of larger components) for an efficiency gain where necessary.

The Voyager probes had a 50 V square wave 2.4 kHz power supply which necessitated filtering out from the radio data at 2.4 kHz and 7.2 kHz (the next most significant overtone in a square wave). source

Not the answer you're looking for? Browse other questions tagged power switch-mode-power-supply power-electronics or ask your own question.