I'm trying to establish communication between Atmel Atmega32U4 (used in Arduino Leonardo) on MCU PCB and TI DAC8552 on PSU PCB via isolated SPI link. For isolation I'm using Silicon Labs Si86xx digital isolator which can go up to 150MHz. While everything works as expected WITHOUT isolator I got a quite strange results when isolator is put in between MCU and DAC device. For testing is used very simple Arduino sketch which sending in infinite loop two values to the DAC each last 20ms:

Schematic derived from much complex one is shown below: Connection between MCU and PSU PCB: 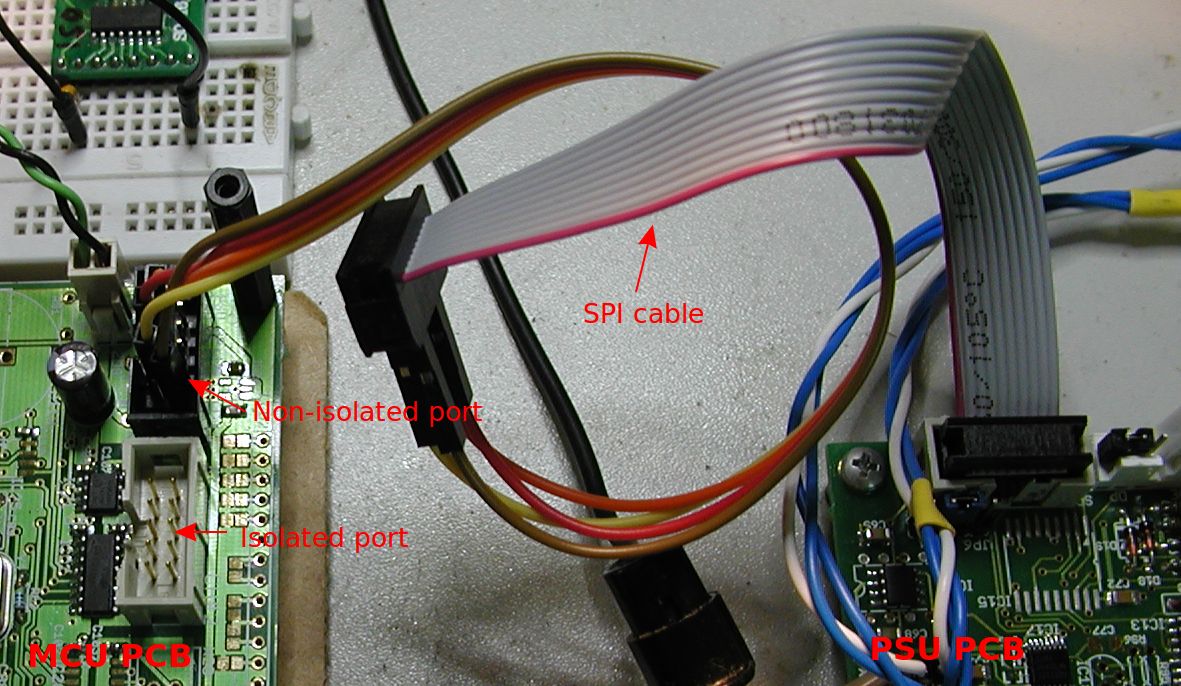 Here is what I got when isolator is added between MCU and DAC: I tested it using isolator on MCU PCB ... 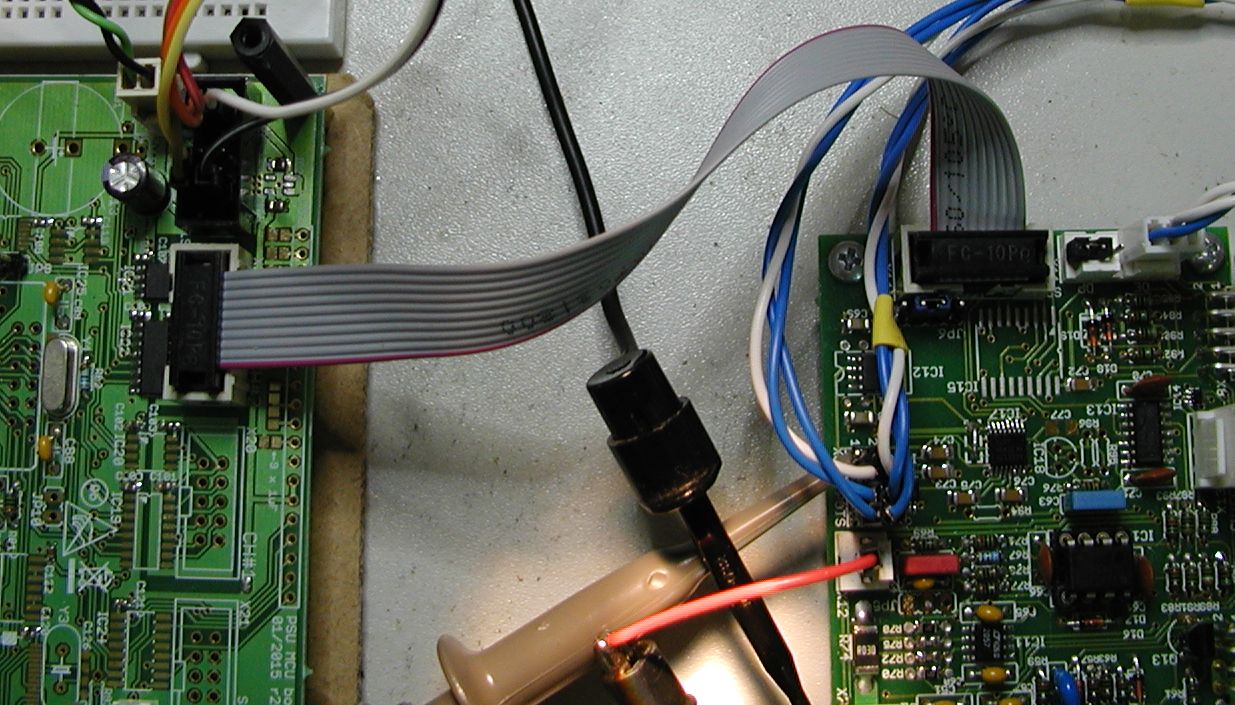 but also to be sure using isolator connected on breadboard to be sure that something is connected wrongly to the MCU PCB:

Please note that MCU PCB has two 10-pin IDC connector: black one is a non-isolated SPI, and grey is isolated SPI where "remote" part of the isolator device is supplied from external source (PSU PCB). Intentionally I used the same ribbon cable, and cable length doesn't seems that is an issue since everything works correctly without isolator. To be completely on safe side I tried to slow down SPI clock as much as possible even down to 125kHz (divide by 128 from default 4MHz or divide by 4). Nothing helps in case of isolator - I'm continuously receiving random values on the output instead of fixed two. I also tested the following "hybrid" connection where MOSI and chip select (ADC2_SELECT) goes thru isolator and SCLK is connected directly while MCU ground IS NOT connected to "remote" PSU ground. To my surprise that combination works but I cannot explain why! Also checking signal from the both side of isolator don't shows anything suspicious: signal duration on the "remote" side is slightly shorter since isolator has built-in Schmitt trigger logic.

I ran out of ideas what to test next so if someone has any suggestion please let me know.

EDIT 2015-06-08: I'm adding below two screenshots side by side where on the left is DAC out when SPI is connected directly. It seems that setup of new value is in sync but for some reason value is "shifted" up or down in case of lower value (0x20).

EDIT 2015-06-09: Please find below more measurements as suggested by Tom L. Everything is performed on the breadboard, same wires and flat cable is used as in initially presented results. Grounds on both side of the isolator are tied together, "remote" (or Side B) is supplied from PSU PCB, host (or Side A) from Arduino Leonardo. First I tired using mentioned wiring direct SPI connection and it works as expected. In first step SCLK and MOSI stays directly connected CS (ADC2_SELECT) goes over isolator. All unused isolator pins are grounded. DAC works as you can see on the following two screenshots (S1 is host side, S2 is remote side on the isolator device, DAC signal is analog output on DAC8552 pin 4 (VOUTA): And now we comes to problem that persist and I cannot figure out what is going on: when SCLK goes thru isolator communication stops regardless of the fact that signal looks fine on both side of the isolator. Please note that on DAC trace there is no more changes. That is one of two possible scenario. Another one is already described (random values are presented on DAC output). I'm adding one additional scenario when SCLK is connected to host side via capacitor. In that case DAC starts to behave regularly even when grounds are not tied together. Pleas find below schematic and result: That output signal looks like you connected two outputs to each other (SDO?) or a clock to some other output. Switch your device off and measure if your connections are correct.

Also, which part exactely are you using, since there are a few variants with different input/output configurations.

Alright, we'll have to do this step by step.

Which items work, and which don't?

The whole misery is generated by wrongly declared SPI clock mode. I even put in sketch as an reminder the following comment: CPOL=0, CPHA=0 what is SPI_MODE 1 and for that in Arduino IDE exists constant SPI_MODE1 what is not equal to 0.

So, for the correct working the following command has to be used:

EDIT: My understanding of CPHA was wrong. CPHA 0 is not falling edge what DAC8552 require but rising edge. The right CPHA has to be 1 and not 0.

Not the answer you're looking for? Browse other questions tagged atmega spi dac or ask your own question.