My question is can I (and how might I with minimal insanity) connect the audio output of a Raspberry PI (and/or other USB audio outputs) via say some 10-30m of Cat5 cable to some 10 or so pretty ancient looking hotel room speaker units, which might have amplifiers in, or might not!

To really understand why I'm asking what must seem like an utterly MAD question, clearly some additional information is required...

So, to briefly set the scene - my parents have moved into a new home, which was once a hotel, and as part of the EXTENSIVE renovation they decided to keep the old hotel intercom system as a bit of a nod towards its history and heritage of the place. I think it's quite wonderful so I'm glad they kept it. An electrician has already moved the central unit and replaced all wiring to the room units (I think using Cat5e) and it seems to work... at least some of it does, I at least managed to get some functions working to send voice to rooms and stuff, and make the message LED light up.

For interest, and context, here's a few photos of the central unit... 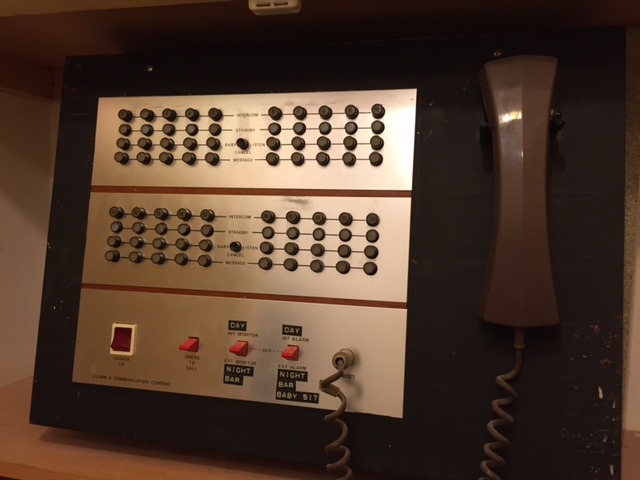 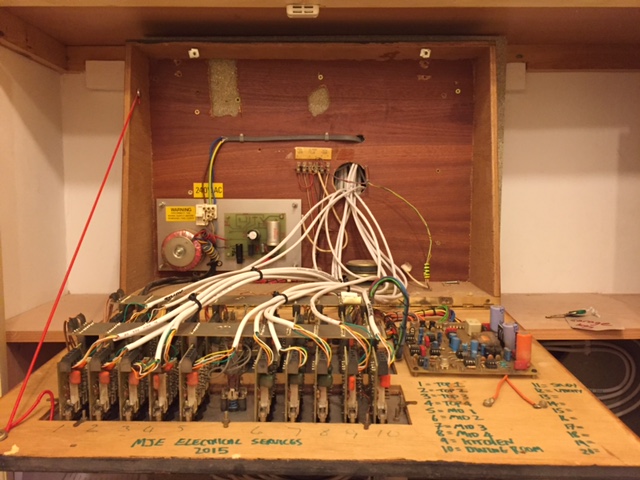 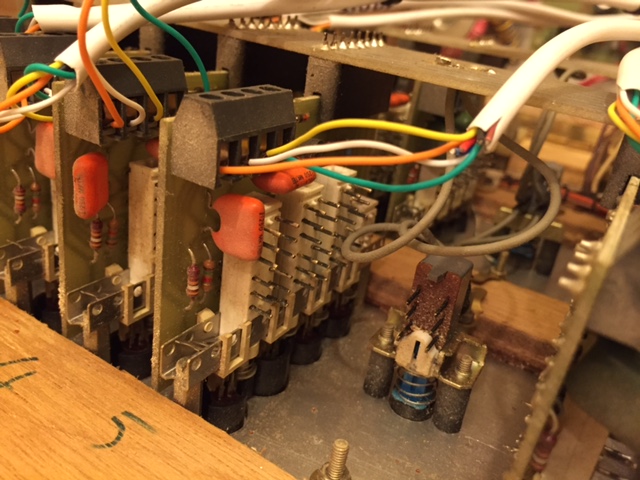 And the room units... 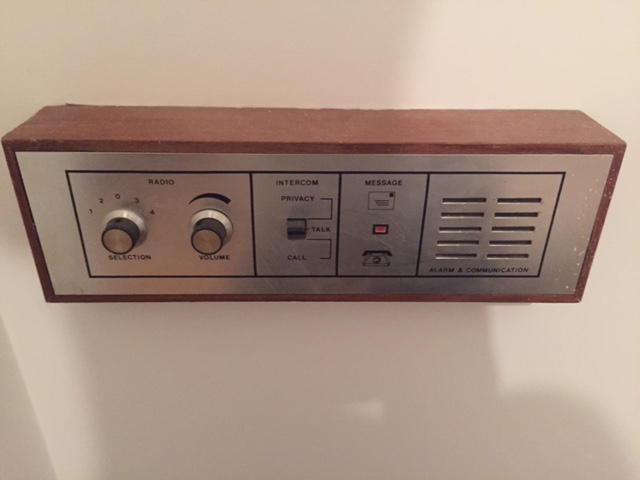 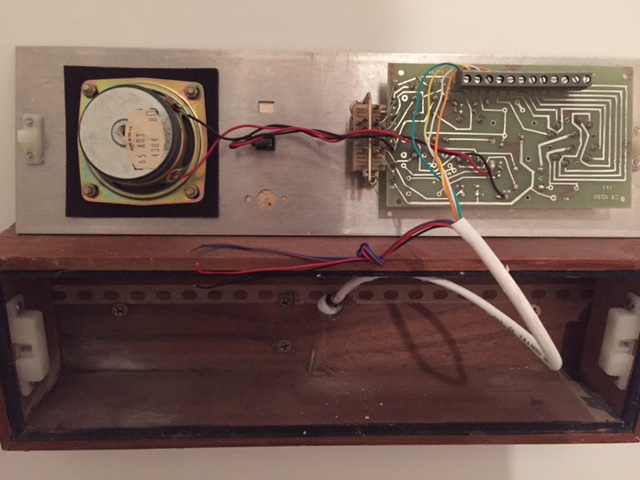 Now though the intercom works, the radio does not. I suspect there is no radio function in the central unit, and probably never was, though this might be an ignorant assumption on my part. I see nothing that looks like tuners (of which presumably there should be four (one for each channel on the room units)), and the chips all seem like either non audio, or stuff like op-amps and attenuators that one suspects are for the intercom audio, nothing especially obviously radio like specifically. As you can see from the photos, the circuit boards are pretty old technology.

Since radio reception in the area is truly dire even by roof aerial (and there is no roof aerial connection available near the central unit even), this might in any case be no great loss, so I was wondering if I could achieve a modern upgrade/addition to the system; an addendum to its history, in the form of internet streamed radio supplied from the central unit!

So my (first) sub question is actually, is it reasonable to expect the room units have amplifiers, and hence I should not be thinking of providing real speaker driving power from the central unit to the rooms or is this system more likely designed with all the driving power achieved in the central unit? I realise no one can know this unless they've come across a very similar system, but I imagine there is a more sensible design option that has likely been followed. Clearly any power for amplification must go over the Cat5 too, as there is no power delivered to the units separately.

If there are amplifiers in the room units, would the Raspberry PI audio out or other USB audio outputs need amplification? There seems to be enough power in such things to drive small headphone type speakers at least, so does that mean driving a bunch of amplifiers with quite a bit of cable in between is OK and can I just connect all of them in parallel or am I out of my mind?

If there not amplifiers in the room units, should I be thinking of one amplifier capable of driving all the units at once, or many separate drivers? And if I drive them from the central unit like this, should I add the impedance of the wires to that of the speakers when considering sizing?

Any extra comments/advice is of course welcome. I'm happy to do research and work at it a bit, but though I am slowly trying to get into electronics, I'm still at the stage of feeling like it's wallowing through treacle; I'm liable to make dumb mistakes on a project like this if I'm not careful.

I have 4 wires to work with, because the electrician used 4 of the 8 Cat5 cores. Not sure if this means I can get all 4 radio channels going or not, in my mind it seems possible, if one of the other wires is a ground, then there are 4 wires for 4 radio stations, but there are eight unused connections on the wall units (most of which seem to go to the radio channel knob) which worries me a bit, but if I could get one channel going only that would still be a great thing, because if nothing else my mum is a great radio fan and would love to go from room to room switching radio 4 on and off without carrying around a radio (which works very badly if it works at all anyway).

Edit (following answer post): not ideal, but I do also have this photo peering inside the wall unit! Not a lot to see, a capacitor, a few diodes probably, transformer. There's obviously not a huge amount, though there is something big and shiny I can't guess at. 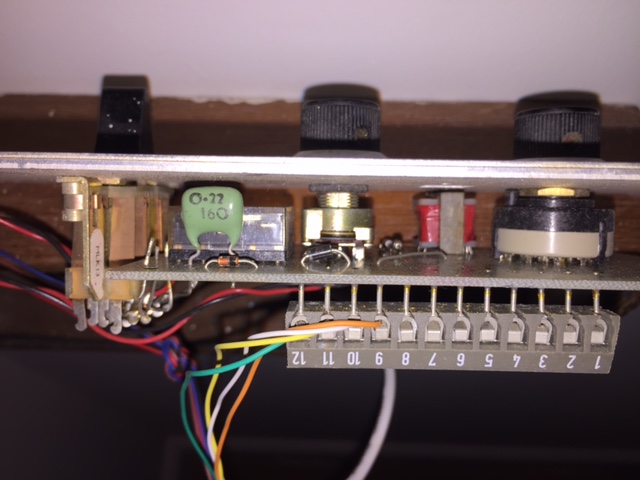 There's some lovely 60s brushed-aluminium-and-wood casework there! And quite a decent job by whoever renovated it, and did you the favour of labelling the wiring on the inside of the case.

You might get a better reception on /r/electronics than here, due to the open ended nature of the question. Step 1 has to be to reverse-engineer the original system, either by finding its original service manuals on the internet or by drawing a circuit diagram from the single-sided PCB. It's quite clear from just looking at it that all those unused screw terminals connect to the four-position radio channel switch. It looks like there is no local tuner as you say, the switch selects an audio signal from the screw terminals. Whether it amplifies it locally is unclear: we could do with a photo of the other side of the PCB, which will involve taking the knobs off (grub screw visible at top) and undoing the nuts on the shafts. I suspect (given your comment about power) it doesn't amplify it locally, or the amplification is only for the microphone (which I can't locate visually).

I'm offering this as a general answer for all to edit as we figure out what's what. Please feel free to edit. Don't upvote or I get all the credit. 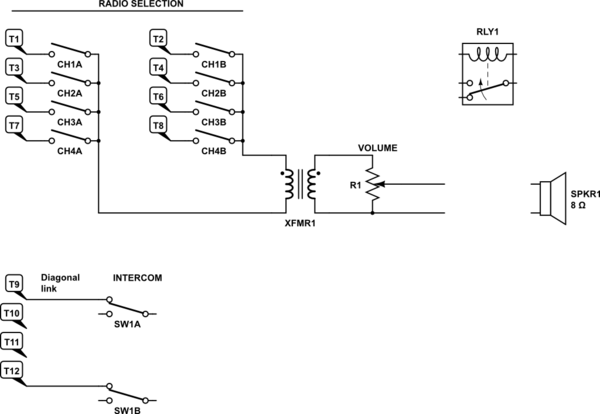 That leaves us with four terminals. Functions to be figured out:

Not the answer you're looking for? Browse other questions tagged amplifier audio raspberry-pi radio or ask your own question.