DB9 male or female Connector in Board

In my design I am using RS232 with DB9 connector in my PCB. idea is to log the data in PC and for programming via serial. Which connector I need to use in my board , it is male DB9 or female DB9. 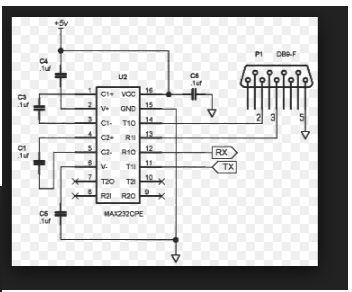 Q1) What connector I need to use in my board male or female Q2) If I use male connector in my board then Pin TO1 will need to connect to pin 2 or pin 3.

Use Db9 female connector in your board, since PC have DB9 male connector , or if your PC dont have DB9 then you may need to used RS232 to USB converter cable, which has male DB9 port.

The original plan when the D-sub connector family was introduced was that equipment would always have female connectors and cables would always have male connectors. The idea was that pins are easily damaged, and it's usually easier to replace a cable than to replace a connector on a piece of equipment. Designations such as "DCE" (data communications equipment) and "DTE" (data terminal equipment) would indicate whether signals such as TXD and RXD were inputs or outputs on the equipment.

And just to be pedantic, the correct designation is "DE-9". "DB" refers to the larger shell used for the 25-pin connector.

Not the answer you're looking for? Browse other questions tagged rs232 db9 or ask your own question.

2
Questions about wires in a DB9 cable
2
Is there any standard which defines that a particular connector or header on PCB has to be male or female?
7
Problems with homemade RS232-to-TTL converter board based on TI's MAX232
1
Are RS232 to RS422 converters reversible?
0
Making a DB9 Cable
2
What is the name of this connector on the end of a serial cable (not DB9)?
1
How to Make DB9 F/F serial RS232 mini gender changer?