Is there a name for that moving blank space on an oscilloscope?

On most oscilloscopes, there is a blank space that moves along as the data is sampled. Is there a name or phrase that described what that thing is? When you put the oscilloscope on a lower time/division, you can see it moving across the screen. In case I'm unclear, here's a picture where the waveform is not completed and the scope is in the middle of capturing: 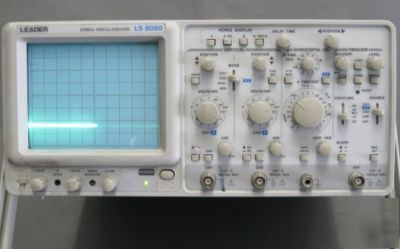 I guess you're referring to the horizontal axis, which represents time.

First of all there is a trigger which starts data capture. As data is received, it is sampled on the display in the shape of the waveform. As you say, "the waveform is not completed and the scope is in the middle of capturing" and the right-most point of the waveform is the current signal level. The blank space on the right will be completed as... time passes and data is captured and displayed.

This is visible when you play with horizontal sensitivity to decrease sweep speed (a smaller piece of signal on the same display width).

Unlike a scrolling display possible on digital scopes the analog CRT scope draws from left to right. The scope trigger circuit determines when the trace starts.

Figure 1. The electron beam is deflected by the charge on the horizontal and vertical deflection plates. A sawtooth wave applied to the horizontal plates to give a linear left to right trace. Image source: hit.bme.hu.

The phosphor glows when struck by the electron beam and then decays. The phosphor is chosen to give a reasonable balance between persistance at low trace speeds (where a long decay would be advantages) and quick decay to prevent blur on changing waveforms at high speed. This could be compensated for somewhat by adjusting the beam intensity.

Is there a name for that moving blank space on an oscilloscope?

I like @EugeneSh's comment that the blank space is "the future". However, there is a ghostly line visible on the right half of the screen and this is the past (obviously from the previous trace).

0
Clarification about AC and DC coupling on oscilloscope
1
Why is the calibration signal's amplitude of my oscilloscope 10 times higher than stated?
2
Inconsistent readings between oscilloscopes
19
How does the oscilloscope trigger really work?
0
What was the point of an "alignment scope" like Kikusui 5091, and can anything be done about it's dismal horizontal bandwidth?
15
Rigol DS1074 oscilloscope shows very wrong timing