Is there a standard way to build a configurable circuit topology mesh using mechanical or solid state relays (or/and other components)?

A set of pin short circute specifications looks like:

I've tried to illustrate this using the diagram below.

Is there a standard way of constructing such a routing mesh? 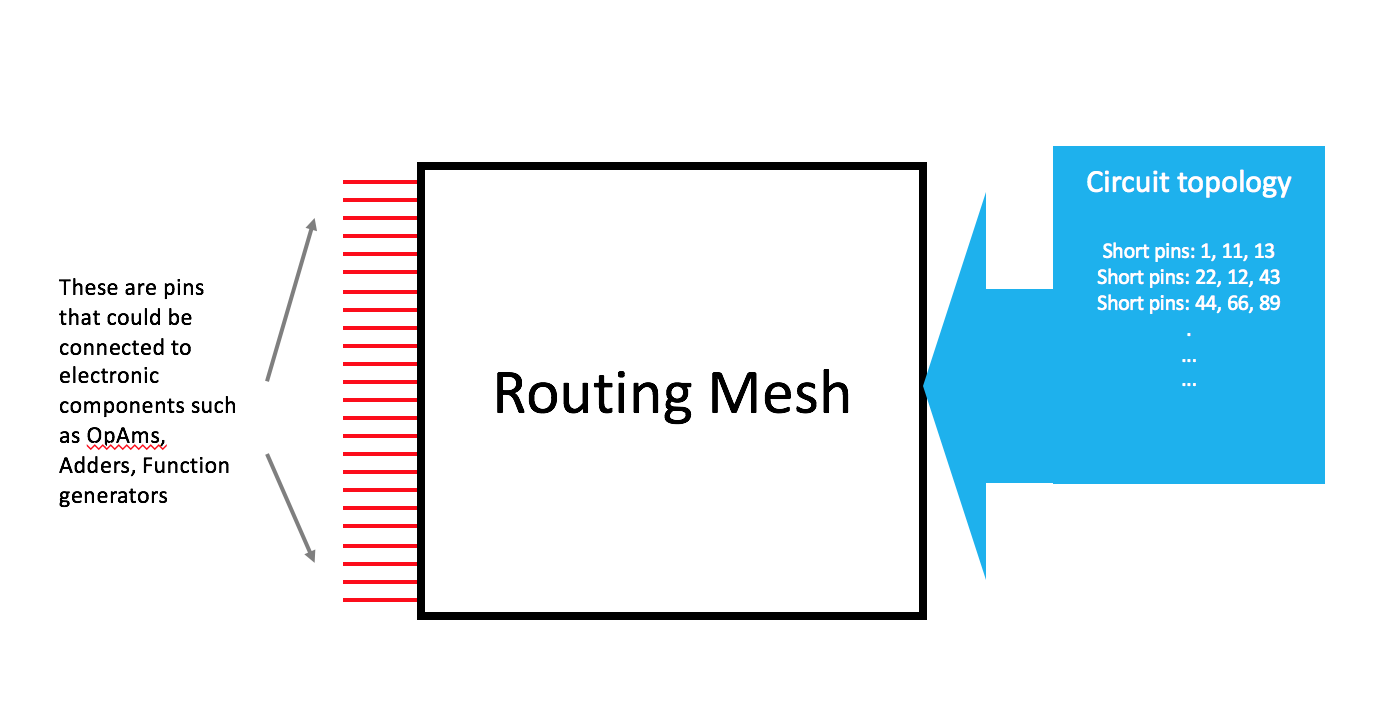 A system for mechanically making electrical connections between pairs of points? That sounds like ... a (pre-digital) telephone exchange!

Provided that you're not using most of the connections most of the time, you could build it out of Strowger Switches.

Edit: plan B, the robot-pegboard: take a large sheet of "hardboard pegboard" (large scale) or veroboard (small scale). Run wires horizontally/vertically on each side, arranged so that a metal peg pushed through makes contacts on both sides. Having thought about it, reliability of this might be a nightmare, you'd probably have to mass-produce sprung inserts.

If you insist on all points to all other points potentially all at once (which the telephone network can't do!), then there's no shortcut. You will need 100 x 100 switches, arranged in a grid. Each of those analog switches will let you handle a 16x16 section of the grid. You'll need 40 of them. Note that each switch has a 200 ohm on resistance, which might be a problem for small signal applications. Designing the routing so that crosstalk doesn't destroy everything is also going to be interesting - a ground shield for every signal?

(Basically there's a reason nobody builds huge analog computers, and the noise problem is a big part of it. It'll work at audio frequencies - see modular analog synths - but at tens of MHz it'll just disintegrate)

As jms and pjc50 previously mentioned, there are ways to wire up (pairs of) FETs to act as bidirectional analog switches for analog signals in some reasonable range of voltages and frequencies.

One standard way to build an automatically-reconfigurable circuit topology mesh for analog signals is with a field-programmable analog array (FPAA) such as the ones in a Cypress PSoC. ( " Are there any Analog FPGAs? " ).

Not the answer you're looking for? Browse other questions tagged relay circuit-design solid-state-relay configuration interconnect or ask your own question.

30
Are there any Analog FPGAs?

3
Simple AC line state detection for digital controller input
0
Should I use a snubber or solid state relays on a 24 vac circuit?
1
How can I switch two wires using solid state relays?
2
How to make Op Amp Gain Switch Solid state. (vs jumper)
1
Solid State Flasher controlling other Relays
4
Latching relay not working
0
Circuit to a/b switch like a relay would. So an analog or digital signal can be turned on or off or routed
1
Why does Arduino get damaged when used in this relay circuit?