I'd like to string together 10 of these Cree LEDs in a series circuit (Vf: 3.0v, Imax: 0.3A): http://www.cree.com/LED-Components-and-Modules/Products/XLamp/Discrete-Directional/XLamp-XQA

I've done a fair bit of research but my only electrical knowledge dates back to my school days so I'm hoping someone can advise as to whether this really is a suitable driver?

Also if I were to increase the number of LEDs to 12 (requiring a total of 36v) would the LEDs function as normal but the last one appear dimmer?

Lastly, I'm unsure if I should add a dropping resistor at the start of the circuit, and if so is the following calculation (for 10 LEDs) correct?

Please assume minimal knowledge (but a desire to learn)!

To answer your questions in order:

whether this really is a suitable driver?

Also if I were to increase the number of LEDs to 12 (requiring a total of 36v) would the LEDs function as normal but the last one appear dimmer?

No. LEDs don't work like that. If you go over the maximum voltage requirement then all of the LEDs will be off.

Lastly, I'm unsure if I should add a dropping resistor at the start of the circuit, and if so is the following calculation (for 10 LEDs) correct?

No resistor in series with the LEDs is needed. You use a resistor to drive an LED if you have a constant voltage driver. This is a constant current driver and so no resistor is needed, all it would do is waste power.

You do however need a capacitor on the power input. The data sheet gives examples of both minimum and recommended connections for a range of operating modes.

I would also recommend adding a couple of resistors to the analog dimming input to bring the drive current down to about 200mA. You'll get a lot more life out of the parts if they aren't being driven right to the limit of their operating range and the change in brightness will be barely noticeable.

The typical forward voltage of the white LED is 3.0 volts but it may be as high as 3.3 volts (read the data sheet). This means that 12 LEDs could require a voltage of 39.6 volts.

Given that you only can supply 35 volts your driver would go into constant voltage mode (limited at 35 volts) and this would produce a relative brightness of 75% compared to running at full current: - 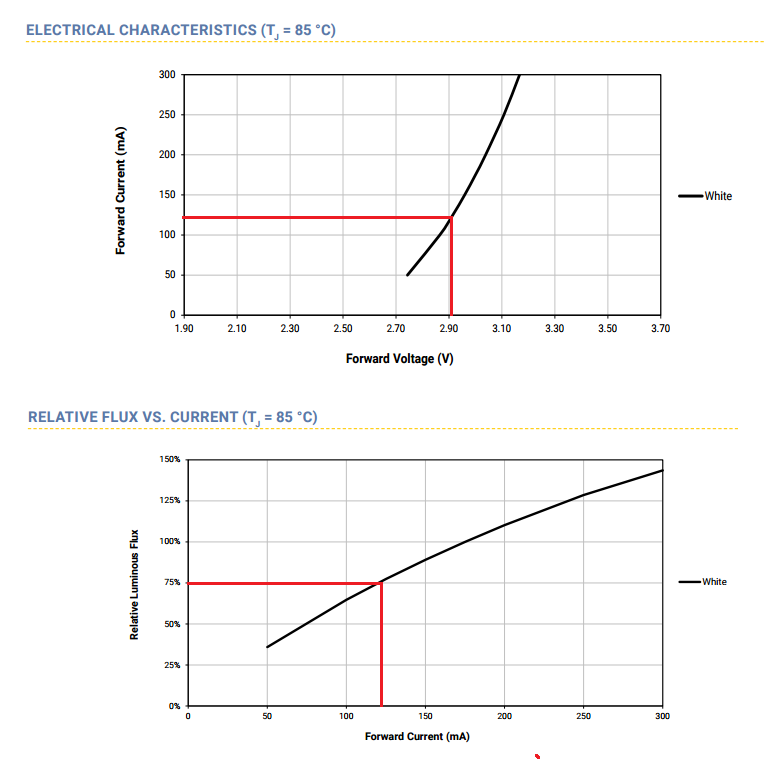 So, the top graph is the individual forward voltage for 12 identical devices in series powered from a 35 volt power supply (35/12 = 2.91). With 2.91 volts, the likely current is going to be around 120 mA then, going to the bottom graph, that reduced current results in 75% of the luminous flux.

Not the answer you're looking for? Browse other questions tagged led driver series or ask your own question.