why ultrasonic module sends out 8 cycles ? and , why the trigger pulse is 10us?

this is the operation of the ultarsonic module HC-sr04 :

The timing diagram of HC-SR04 is shown. To start measurement, Trig of SR04 must receive a pulse of high (5V) for at least 10us, this will initiate the sensor will transmit out 8 cycle of ultrasonic burst at 40kHz and wait for the reflected ultrasonic burst. When the sensor detected ultrasonic from receiver, it will set the Echo pin to high (5V) and delay for a period (width) which proportion to distance. To obtain the distance, measure the width (Ton) of Echo pin.

is the number of 8 cycles related to the microcontroller of the module ,I think that but why?

don't forget the second question why the trigger is 10us ?

The receiver and transmitter are mechanically tuned to the frequency, so it will take a few cycles for the amplitude to ring up to the maximum (the transmitter will ring up in amplitude as you drive it, and the receiver needs to 'hear' a number of cycles before it reaches full output, so you better drive it for enough cycles). It's also of no advantage to have too long a sequence of cycles.

That is why the designer programmed the microcontroller to output 8 cycles in particular, in answer to your first question.

Read any reference on 2nd order systems for an explanation of Q and resonance. The center frequency of this mechanical resonance is typically specified to +/- 1kHz (+/-2.5%). Here is a typical one: 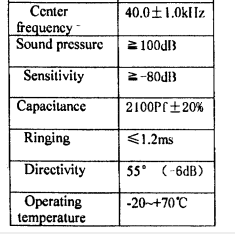 Note the ringing specification of 1.2ms for this product, which implies a much higher Q. It is a waterproof type and has too high a Q for good results in a ranging application. You can find more information in this answer.

In answer to your second question, the 10us is probably to allow the firmware in the microcontroller to recognize the input. If they don't use an interrupt but rather a tight loop it might take that long to traverse the loop so a shorter pulse might be missed some of the time.

trigger pulse is the requirement of controller.

the number of pulses provided is the optimum number for generating ouput voltage at receiver side.

to understand that i performed an experiment: I used two 200kHz US transducers, one as transmitter and other as receiver at a distance of 40mm.

On sending pulses from transmitter the receiver gives an output signal which is conditioned to give a mountain like peak. 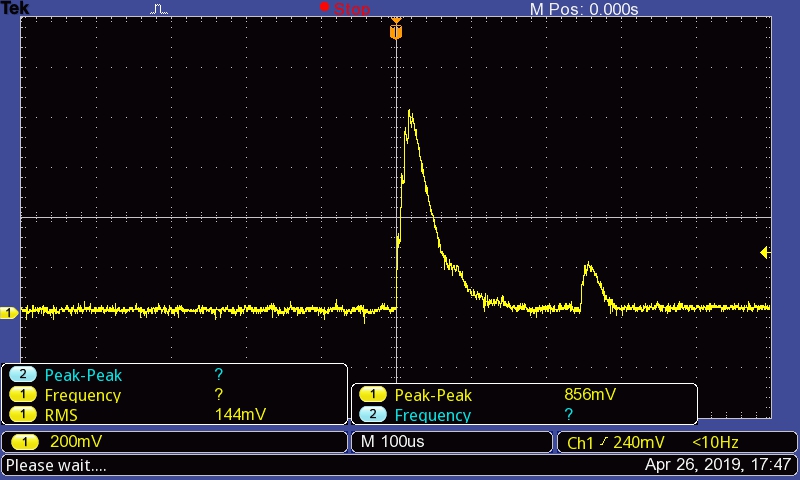 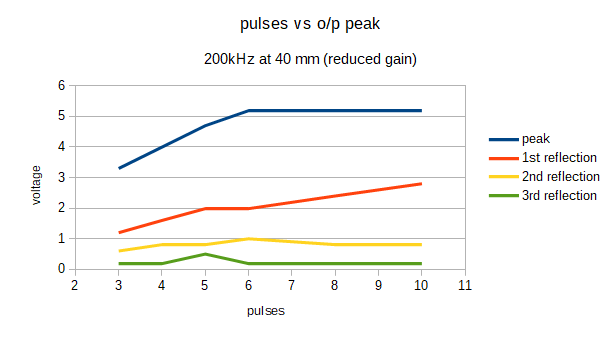 Hence from this experiment I concluded that for 200kHz, at 40mm the optimum number of pulse required to get maximum output is 6.

Similarly the number of 8 pulse might be calculated. also some sensors provide this information on data sheet. e.g. Air Ultrasonic Ceramic Transducers

Yes, the input trigger is related only to the onboard microprocessor detecting the start pulse.

Yes, the 8 cycles of drive at 40kHz is related only to the microprocessor timing driving the output.

The HRC-SR04 has a microprocessor on it that does all the timing for send and distance calculation. The output signal is actually created by an RS232 driver (MAX232A). The driver creates it's own +ve and -ve supplies to drive an RS232 line. There is a delay from the 10 uS input trigger to allow the MAX232 to stabilize it's +ve and -ve supply (typically it reaches +/-7 V).
The microprocessor then sends the 8 cycles of drive to the sender (14 V p-p through 600 Ohm resistor, so there is no waiting for an osc to reach amplitude.
The sender does have a natural oscillating frequency, but in this application it is actively driven by a square wave, there is no oscillator circuit.
The sender is driven by the RS232 driver and damped heavily (600 Ohms) when the digital signals stop.

One guy did a lot of excellent work on the HC-SR04. I'm not sure what MAX232's he's talking about but in my experience the output drive voltages are closer to 7 V rather than his quoted 10 V. Either way the material on his website is superb.

Not the answer you're looking for? Browse other questions tagged microcontroller ultrasound or ask your own question.

14
How to measure pulse width of an IR signal using an 8-bit PIC?
3
Connecting multiple ultrasonic sensors to one Arduino
1
Band pass filter unstable and lower gain than simulation
1
Ultrasonic sensor without micro controller
0
Why did my Ultrasonic Sensor HC - SR04 measured distance is less than half of the actual distance?
0
Issues using an Ultrasonic Sensor with Raspberry Pi
0
Can we use long wires with ultrasonic module HC-SR04
0
what is this IC and pin on the HC-SR04 which is being used for "Raw Echo" data?