What is the primary cause of premature relay failure with AC inductive loads: inductive kickback causing arcing across the contacts or the inrush surge current exceeding the capacity of the contacts? Specifically I'm trying to find the right relay to control a 120vac, 7.7Amp (1/2-hp) furnace motor. The relay would be driven by smoke detectors.

EDIT: To clarify, the furnace has a main power switch and is also turned on and off by the thermostat. The relay itself is not used to turn the furnace on or off EXCEPT in case of a fire, in which case the smoke detectors activate the relay, opening the N/C contacts to shut off the furnace.

An engineer at a major relay manufacturer recommended a model of theirs that would handle the high inrush current but made no mention of any voltage spike suppression. Discussions on this board, however, focus mostly on RC snubber solutions.

Given the nature of my application, the N/C relay contacts would remain closed in normal operation except in the case of fire, monthly detector tests or the occasional burnt slice of toast. So there should be minimal (but not zero) arcing occasions. On the other hand, inrush surges would occur several times a day through the closed contacts as the furnace cycles on and off.

This leads me to think that over-sizing the relay capacity is, indeed, the most important thing. But do you think it would also be advisable to look at a snubber?

OK, no resolution yet. But here's another possible approach... Doesn't a furnace thermostat use a relay to turn the furnace on and off? If so, instead of using the smoke-alarm-connected relay to cut out the furnace motor directly, might it be possible to use this (new) relay to control the current to the existing relay that's already installed somewhere in the furnace? Presumably this existing relay is already properly spec'd and/or surge-protected. I don't have a circuit diagram for this furnace but does that sound like a possibility?

What is not good practice is to have a relay that must remain energized to shut off a system that must be shut down in case of fire. Cutting off power to the furnace may be ok.

You don't want to just shut off the fan without shutting off the fire in the furnace. The furnace must be designed to shut down safely in the event of power loss, so I would think that it would be ok to just cut off the power to the furnace for an emergency shut-down.

However, I would think that the furnace should have an emergency shut down provision that would allow connecting a low-current relay to a special place in the furnace control unit. You should probably investigate that. I would think that a heating contractor would know exactly what is the recommended way to accomplish what you want to do.

If you want to cut off the furnace power with a normally open relay contact, search for Hp (horsepower rated) relays. Note that a modern furnace will have both an air circulation fan motor and a forced draft fan motor. Since normally closed contacts are not usually used in motor power circuits, you may not find a Hp rated relay with NC contacts.

The smoke detectors deliver 24V to the relay when they are triggered. Not sure how I could use them to keep the relay energized.

Use a latching circuit as shown below. 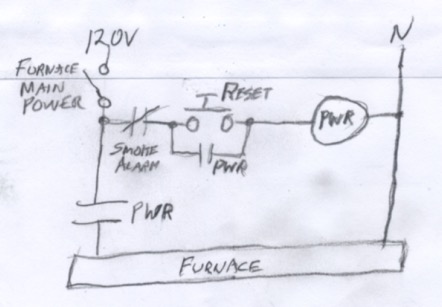 You need to make your own contact protection circuit, this is something I learned back in the electro-mechanical days at the Bell System.

This should help you design what you need; https://www.industrologic.com/mechrela.htm

The answer to my original question is: inrush surge current was the cause of my two furnace relays frying. This is based on the observations that (a) the normally closed contacts opened only a few times before failure - therefore not many arcing events; (b) on the other hand the furnace motor would have stopped and started hundreds of times leading up to the failures - with huge surges running through the NC contacts at each startup.

Also, I must thank Charles Cowie for pointing me in the right direction to actually solve my problem. Charles suggested talking to a furnace contractor. Bingo! The SM120X relay is fine to use but not to interrupt the 120V power to the furnace. Instead it should be used to interrupt the 24V control circuit within the furnace which, in turn, will cut power to the furnace. In practice this means putting the relay's normally closed contacts into the path of the Red wire from the thermostat.

Not the answer you're looking for? Browse other questions tagged motor relay snubber or ask your own question.