Here is my dark sensor circuit (below). However, my output current is very low. I get a maximum of 150mA to drive my strip LED. But I require atleast 450mA of output current.

I have tried many combinations. Tried emitter follower / tried replacing it with a N channel mosfet with not much improvements.

What can I do to achieve the desired 450mA?

I dont want to use a 3V relay in order to do this. Neither a solid state relay or a reed relay. Nor an optocoupler (low current). Any other alternate ways to do this? 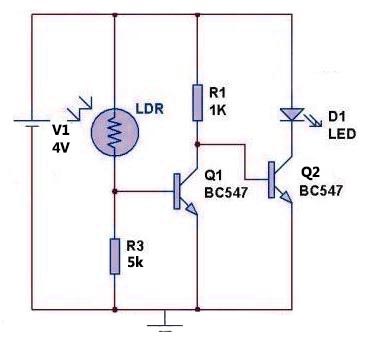 Notice that R4 is a varistor...obviously this wouldn't be necessary in a finished design, but when experimenting with LED drivers, I find it best to use a variable series-resistor until I get everything working right. Then, it's a simple matter to measure the resistance of the "working" setting on the varistor & replace with a near-value fixed resistor in "production models." 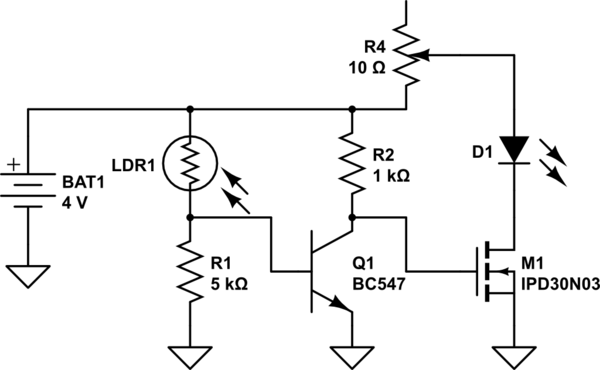 Here's an idea for a circuit I personally would use preferentially to the one above; though its a somewhat different topography than you're using:

The key advantages here are:

The BJT you're currently using should not be used for currents higher than 100mA.

The MOSFET you used has a threshold (Vgs-th) of 2 - 4V which does guarantee a drain current > 250µA. You need at least 4.5V to get a low enough Rdson -> high enough current for your application.

Use a MOSFET which has a lower Vgs-th given your conditions, then add a resistor in series with your LED strip to reach the desired 450mA. I do not suggest using the MOSFET in a specific operating point without feedback because its Rdson changes a lot with temperature and is not linear. You could however use a sensing resistor which you could use to control the LED current, but there is no need in my opinion to make this more complex if a series resistor meets your needs.