Are LEDs better than we think?

Conventional wisdom about LEDs says their maximum reverse voltage \$V_{R(max)}\$ is quite limited, usually in the 5V-8V range.

So, for experimentation purposes, I wanted to bring an LED into controlled breakdown, using my current-limited power supply.

Of course I expected the actual breakdown voltage to be somewhat higher than the reported guaranteed \$V_{R(max)}\$, but I could never have expected the outcome I found. I tried with different kinds of "el cheapo" no-brand Chinese indicator LEDs (3mm and 5mm, red, green, blue, yellow and white) and I couldn't bring them in the breakdown region, even at 32V (where my power supply reached its max)!

Therefore I wanted to double check my assumptions and I systematically browsed many datasheets (about 40) of current devices (standard 3mm and 5mm LEDs, for both indicator and lighting applications) from different manufacturers (e.g. Vishay, Nichia, Kingbright, Fairchild, Cree). Almost all of them reported a \$V_{R(max)}=5V\$, with some Vishay devices rated at 6V.

I was extremely puzzled. OK, manufacturers tend to be conservative, but a >25V margin seemed a bit too high. After all, guaranteeing a \$V_{R(max)}=25V\$ (or something like that) could make LEDs good candidates for some useful applications or allow circuit simplifications (e.g., no need to protect LEDs from low-voltage reverse spikes). Anyway, that would be another bullet in the list the marketing people could boast about!

Of course my test was limited to a dozen LEDs of unknown manufacturer, but I suppose they can't be better than those from reputable sources. Or did I experience a sort of reversed Murphy's law, where I found the only box of LEDs on the planet with such a feature?!?

Question(s): Is my finding something that is known in the industry? Why do they keep specifying LEDs with so low a \$V_{R(max)}\$ when the actual devices seems to be much better? Do I miss something?

My assumptions (possibly wrong; and if they are wrong I'd like to know why)

Yes, this is widely known. Anyone who has tested it knows that. The die manufacturers certainly know it.

They don't specify LEDs for more than 5V reverse voltage because it would not measurably increase sales (ie. very few need that capability) and would require them to actually consider each LED type and what voltage it might withstand (maybe 12V for some, maybe 80V for others). There may also be long term reliability issues that would require quantification or possibly a change in LED design to mitigate.

The 5V rating comes from the reverse voltage experienced by an LED driven in a matrix from a 5V supply with push-pull drivers, which is one of the few times you deliberately reverse bias an LED (back to back LEDs in AC-input optocouplers see the forward voltage of the other LED worst-case, or about -1.2V).

There are many parameters that are unspecified (typical data or no data at all) or only loosely specified because the bulk of the market does not demand it. For example, reverse beta, Vbe breakdown on BJTs, temperature coefficient of Vf on indicator LEDs.

As far as what the actual capability of ordinary LEDs is, there is evidence of reverse bias voltage causing gradual damage to the LED due to hot carriers. For example, DOI 10.1109/LED.2009.2029129 indicates damage to green LEDs with -40V applied, so it would be unwise to blindly design something that depended on the high reverse voltage breakdown. 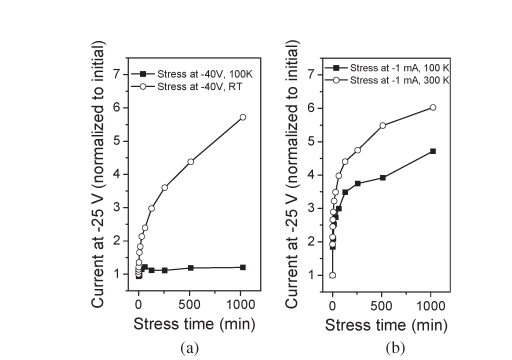 If you stand under a tree in a lightning storm and you survived, does that mean anything significant? This is somewhat like reverse biasing an LED > -5V. 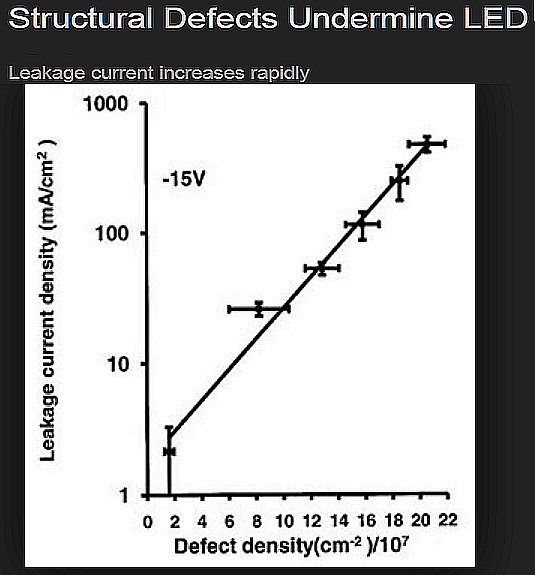 Graph , courtesy of This shows the sensitivity of LEDs in both reverse and forward bias exposed to ESD. Note below, that it is far more sensitive to the left when Vr goes below -5V 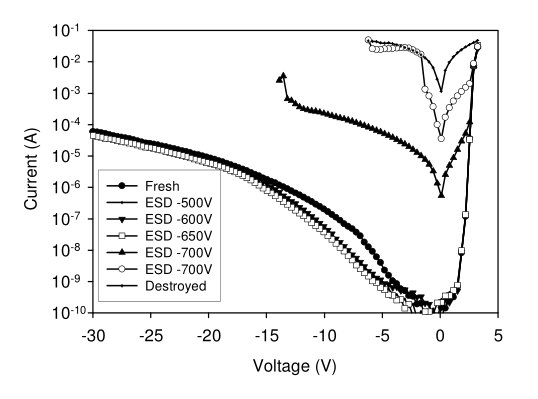 (I could write a book on the subject of Partial Discharge(PD) and Breakdown Voltage (BDV) but I'll keep this edit shorter ;)

WHen a PN junction is reverse biased a charge cloud ( like a cumulonimbus cloud) creates a high E-field charge density where defects are mobile charges (contaminant particles) that are accelerated to form a path that will either detonate the particles (by PD) and "wound" the device ( even MVA transformer insulation) or create a streamer path prior to BDV catastrophic event. ( e.g. like lightning but silent)

Except in a reverse biased LED the E-field I am guessing is on the order of magnitude of 5V/um (like 5kV/mm for almost a spark in air. Then molecular impurities with a slightly lower Er constant will have a greater E-field and charge across it than its neighbour. The charge being built up by the > |-10uA| flow of current where White LEDs are spec'd at -5V in small chips.

A wounded 5 MVA distribution transformer I investigated at a transformer factory in Scarborough had a $m liability problem yet it had a perfect power study performance field test, BUT had dissolved Hydrogen gas proven by frequent dissolved gas (DGA) analysis). This H2 was generated by each PD event in the oil , just like a DIAC Relaxation oscillator, and then reached the well-known (to those in that industry) threshold of explosive levels (4% is the Lower explosive threshold so it was promptly taken out of service , whereafter I performed exhaustive testing to find Root Cause and fix the contamination problem from normal 23kV potentials expected in this dielectric but caused abnormal E fields in particles > 16V/um causing discharge and detonation of oil molecules around it thus breaking down the long CxHy hydrocarbon chains releasing H2.

A similar but different contaminant ( mixed with normal distribution of Nitride, Gallium Phosphide and Arsenic) is accelerated by abnormal E-fields in a reverse biased PN junction and adversely affects LED's life expectancy.

This charge shows the relationship to defects and leakage current but a wounded junction is dense unlike a homogeneous contaminants so the BDV is unpredictable yet known where the stress level begins for many PN junctions (Vbe and LED's, although different in construction exhibit this common failure mechanism with different degrees of accelerated sensitivity.

So to summarize, if a PN junction has a higher tolerance to reverse bias from testing, it does not mean it still is not wounded, just that it has a lower density of particle contaminants in parts per million. The charge acceleration is not linear with contaminant density but rather logarithmic. It is the impact kinetic energy that detonates the micro or nano-sized damage.

When reverse biased the current is rated usually 1 µA for RY and 10 µA for BGW colors.

Imagine that reverse biasing is extreme micropower and measure it and if there is no ESD clamp that something of the order of 100 µW has more power per square micrometer than forward biased current 100 mW per square mm because the path is MUCH DIFFERENT.

It's not like a Zener diode limited by power in either direction. The band gaps can abruptly fail or softly.

So the stress is invisible and wounds the junctions differently. The result can be seen with a higher junction capacitance or an off-colour or a lower intensity or a wounded to reduce MTBF significantly.

Whether it can withstand it briefly or for a while or not is irrelevant. Experts understand the stress level reduces reliability, or performance.

If you don't understand why absolute maximum ratings exists, don't ignore it or doubt it or when you least expect it... hmm, it's not working.

An Engineering guide I made to client in 2005 before I went on site visit to resolve ESD and solder problems causing 1% field failures fixed later by my process improvement recommendations. 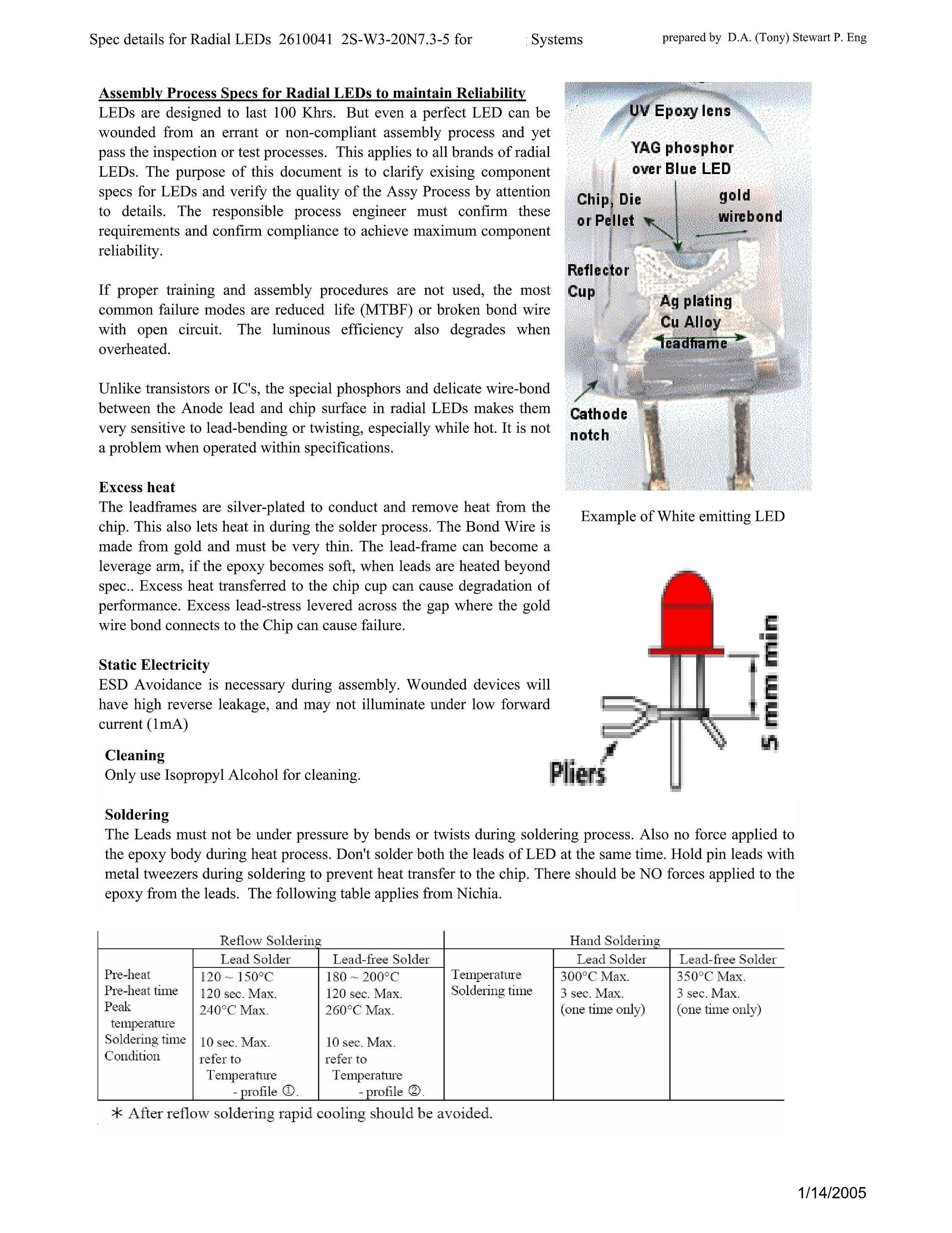 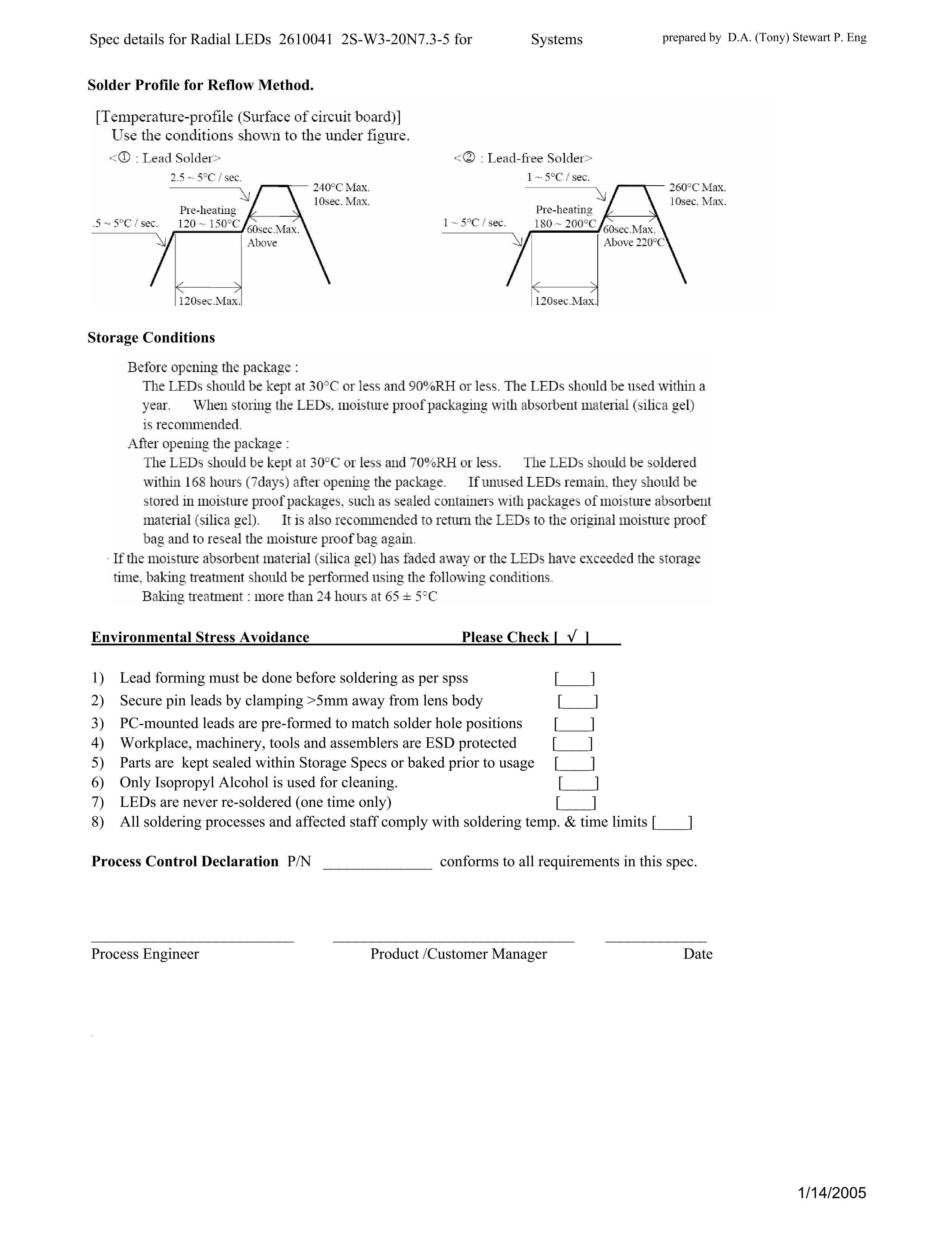 Why is this a bad idea?

Exceeding absolute maximums from data sheets does not necessarily mean immediate catastrophic failure. It means that you've gone into a region for which the manufacture no longer sees fit to guarantee that the device will ever perform to spec again, for the remainder of the life of the device.

Also, since your tests were performed on LED's of "unkown manufacture", you have no idea how they are rated.

Simply put, applying high reverse voltage to new LEDs for a few minutes is not a conclusive test. Reverse current in LEDs increases as they age (1), and I would expect that the breakdown voltage decreases as well. By the end of their lifetime more LEDs will break at lower reverse voltage values.

It would unnecessarily lower production yield.

Once you specify a higher than necessary (for LED usage) breakdown voltage, you would have to reject (or sell as a different grade) any production output that doesn't meet that specification but otherwise works A-OK as a LED. Unless the user needs a LED that can do double duty as a rectifier, this would only drive up cost and/or catalog complexity.

Not the answer you're looking for? Browse other questions tagged led datasheet maximum-ratings reverse-breakdown or ask your own question.

2
Reference to understand LED data sheet specification, characteristic and way to use them
25
How are LEDs considered efficient?
0
LED Applications
1
LED Power vs current and voltage
0
Efficiently powering multiple LEDs from higher voltage than used for microcontroller
2
Can a reverse biased diode be driven past its voltage rating but with current limited to few uA
0
Why is the threshold voltage kept large in an LED?
0
What temperature should I expect by lighting 3W-LEDs?
1
Potentially unusual LED failure