Shielded cable, to ground or not, in amplifier

I have been looking for an answer on the net about this question but not found it fully answered. The topic has been up here a few times (see links below) as well but I find the answers lacking.

My application is a vintage amplifier (Tandberg TR-1040), where the 30V AC supply cable pair run over the amplifier circuit on it's way to the rectifier and large caps and cause a weak hum. My idea is to improve it's performance thru shielding these AC cables somehow. The machine is not grounded to earth, neither is the chassis. So what would one do? To leave the shielded cable with the shield not connected to anything? Or using unshielded but twisted cables that I route somewhere else inside maybe. But my question is mainly - what happens if you have a shielded cable here but the shield is not connected to ground?

I want to avoid the AC supply to 'leak out' to the sensitive signal circuitry. That is all.

The question was put forth by Jensen68 but unsatisfactorily answered here: Cable type and decreasing EMI/RFI It was also asked briefly here: ungrounded chassis shielding And here: Does an ungrounded shielded cable shield at all?

Help to explain this will be much appreciated!

Unconnected shielded cables seem to be unorthodox or inefficient, nowhere have I found that using them in this way is mentioned.

I am also unsure of if twisted cables not only decreases absorbed interference but also decreases interference 'radiated out' from the twisted pair. In a case like this it is a vital point. 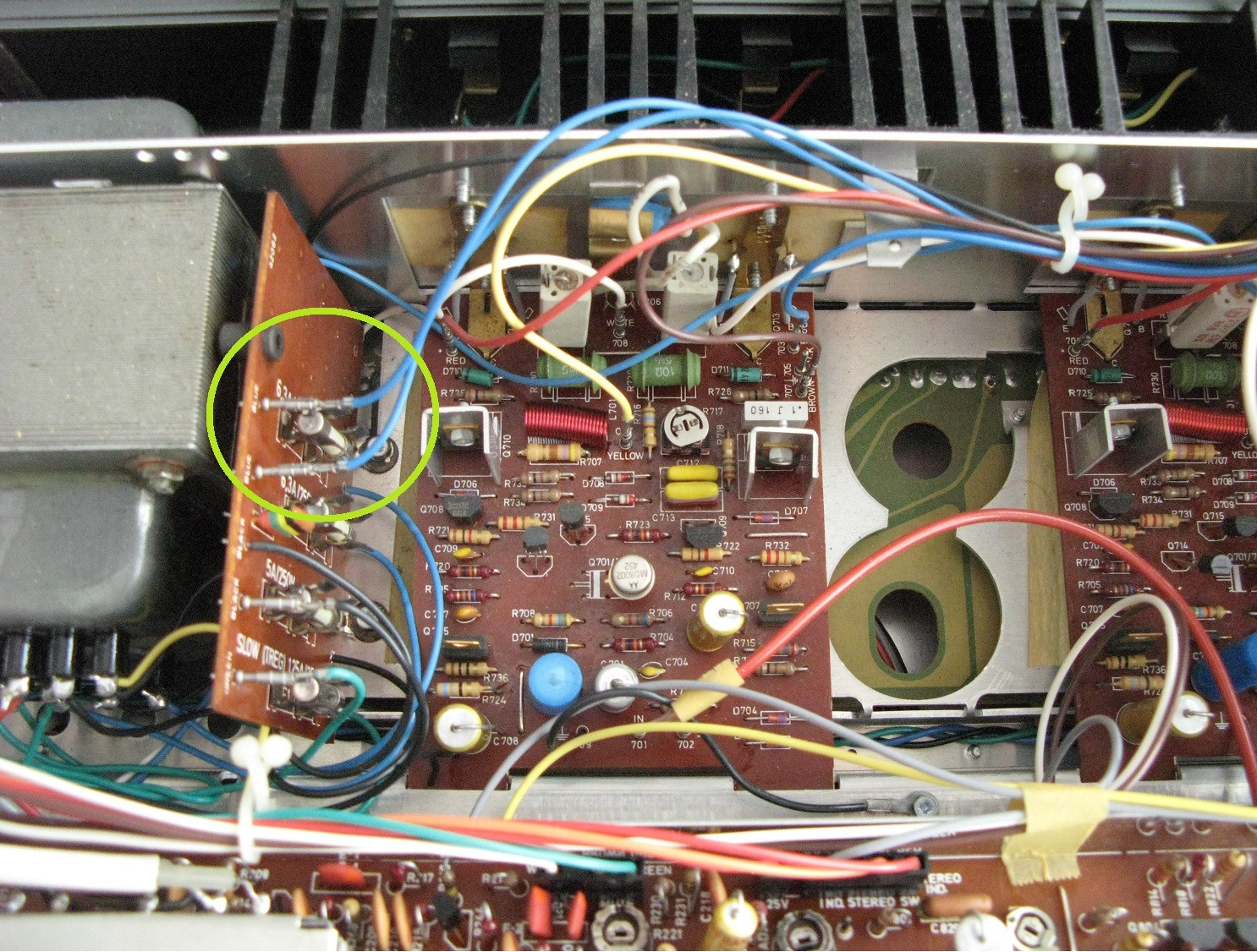 Here is a video on youtube that measures radiation from an AC power cable and what happens when it is shielded by a metal sheet and the shield is 'floating' (measures at about 5:00 into the video). Not sure if it is reliable or applicable here. https://www.youtube.com/watch?v=EeAcGell_cg

The standard solution is to run the line as a twisted pair. Then it is ran close and along the chassis. Vary rarely you have to fix an original layout. but usually you do because of over the years of people shortening wires and/ or repositioning them improperly while working on other stuff.
but lets look at the under side gutz, and Let's see what improvements in the layout: 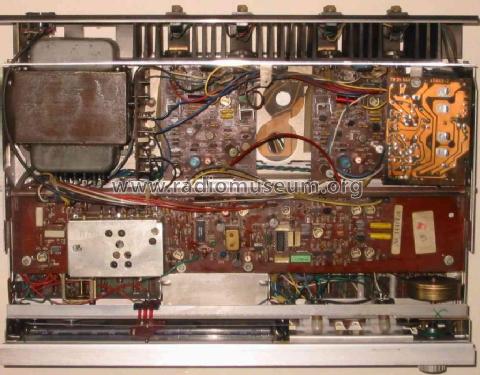 Ok I can see the black wire running across in the normal fashion. Its not bad until I see it loop inward over the board. I see two possibilities you need to run it close to the top cover and that output or find a way to run the wires across on the other side of the chassis.

Shielding is going to have some diminishing returns, but you connect it on the chassis.

The way I look at it is seems you need to dress the wires close to the top cover and the back plate meet in its corner.

It should only need the simple twist on the ac pair. Also the blue wires could be dressed better.

Edit: adding OP's Pic of his unit and comments: 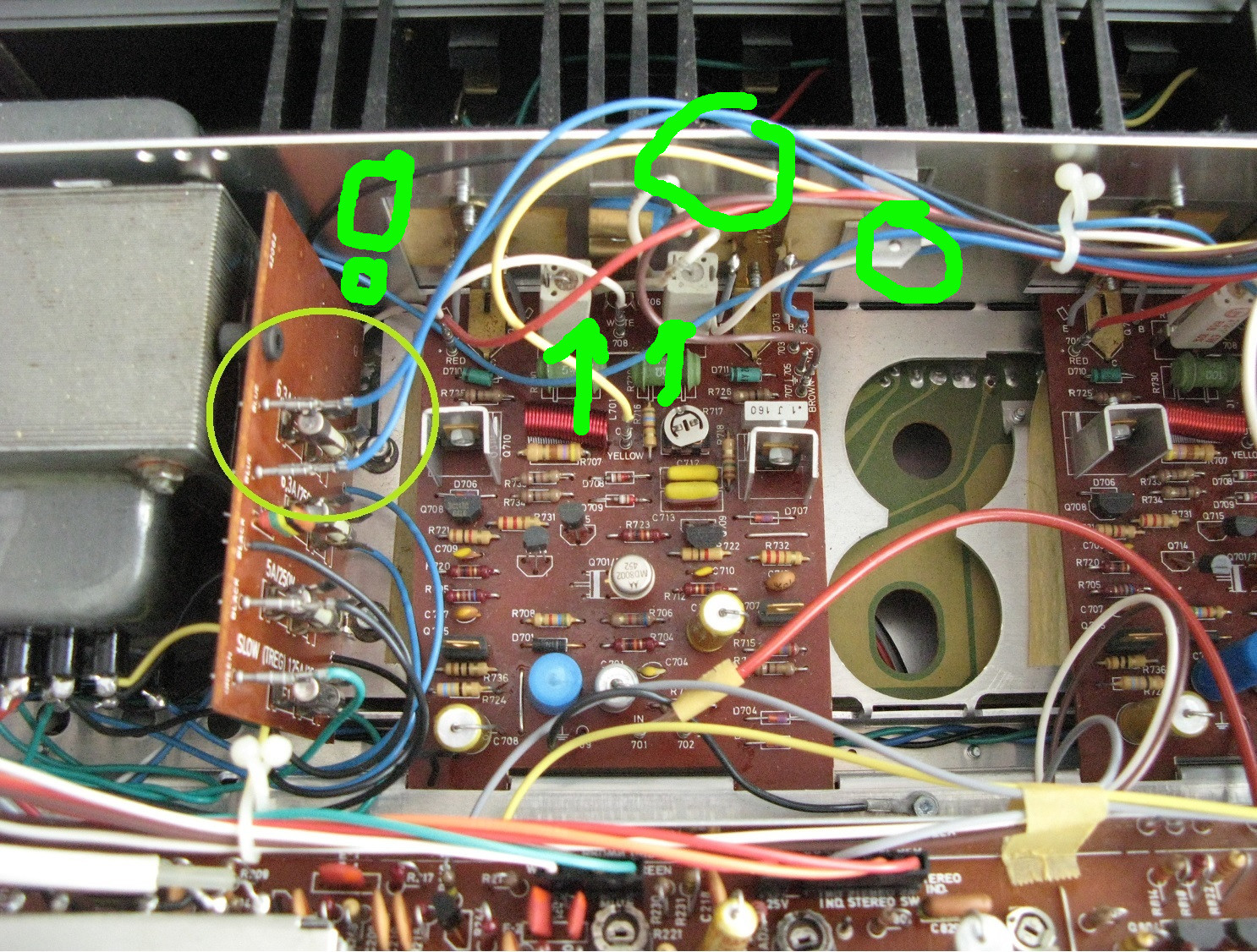 ok, lets display what you got. It seems you need to dress your wires then clamp them on that metal tab with a clamp. Twist and dress those ac lines I circled. also be mindful of those cement resistors as they can act as pickup coils. If this was my amp I would change those cement resistors to non inductive wirewounds just so they would have noise immunity from the wires. Mills MRA12 series is what I would go with there.

There has been tests all around of twisted wires vs shielded. In the low frequency range the twist method works just like shielded cable but better for this application. This is the main construction technique for low frequency ac lines that was taught to us radiola guys back in the day. So you will see this common theme of twisting the wires even in today's tube gear. Twisting the wires reduce's electromagnetic radiation from the wire where shielding only protects the wire from outside interference getting into the wire. Since the source of the electromagnetic radiation is the wire itself, the twisted pair is technically the proper way of dealing with it. Now it seems like dressing the wires away worked for the manufacturer, otherwise it would be a twisted pair.

I also want to point out they intentionally routed those blue wires away from those cement emitter resistors in the oem picture.

A very simple quick fix I learned quite on accident one day while hooking up my guitar, bass, and small PA amplifiers up:

I was doing a small party in my friends yard, and running everything off of a power inverter plugged into my car. I used a 6 outlet strip to plug everything into.

Normally, on home power, this small set up is virtually noiseless, but this time when I turned the 6 outlet strip on, an irritating hum was heard from all three amps.

Luckily, I needed to move everything a bit further from the car and that required an extension cord.

The cord was 25' long, and I only needed a little bit of it.

I coiled the rest of the cable, close to the inverter, and plugged the 6 outlet strip into the end of the extention cord.

When I turned the power back on, the noise was completely gone.

Turns out that the coiled up cord acted as a way to prevent the noise in the line from getting to the amps.

Not the answer you're looking for? Browse other questions tagged amplifier noise ground interference shielding or ask your own question.

10
Does an ungrounded shielded cable shield at all?
3
ungrounded chassis shielding
-1
Cable type and decreasing EMI/RFI

17
With shielded twisted pair cable, do you ground one end, both ends, or neither ends of the shield
0
Using shielded cable on an ebike hub motor, what ground to use
1
How does shielding work in VGA cables?
5
Does a twisted pair cable radiate more EM radiation than non-twisted pair?
3
ungrounded chassis shielding
3
Shielded Twisted Pair noise immunity
15
Cable shielding adequate for video, but not audio frequencies
0
Running and grounding paired shielded cable thru a connector