Inverting the logic of the inhibit pin on TI PTR08100W

I'm using this TI PTR08100W switching regulatator, and want to use the inhibit pin to keep it turned off except when I am holding down a switch.

According to the datasheet:

The Inhibit pin is an open-collector/drain-negative logic input that is referenced to GND. Applying a low-level ground signal to this input disables the module's output. When the Inhibit control is active, the input current drawn by the regulator is significantly reduced. If the Inhibit pin is left open-circuit, the module will produce an output voltage whenever a valid input source is applied.

And indeed, connecting it to ground turns off the output. But I want it to default to off when the button is not pressed.

Of course, the simplest solution (and the one I use right now) is to use a normally closed pushbutton switch. But that has a couple downsides:

So how can I have it default to inhibited, and turn on when pressing a normally open switch?

I think your assessment that there are fewer N.C. type switches is somewhat short sighted. It is true that most TACT type switches are indeed N.O. type but many other switch types offer Form C type contact arrangements that offer both N.C. and N.O. on the same part.

If the input voltage on your regulator is always present you can leverage that to your advantage with some simple additional circuitry to provide the inversion logic that you require for use of a N.O. type switch. Here is how to connect it up.

Use an NPN transistor with its emitter connected to GND. Tie the collector to the inhibit pin on the regulator chip. Then connect a resistor from the base of the NPN to the input voltage supply rail. A 10K resistor may be a suitable value. Finally connect the N.O. tact switch between the base and GND. A small signal type transistor such as a 2N3904 is probably the best type to use.

Pressing the switch turns off the NPN which in turn frees the GND connection at the inhibit input. 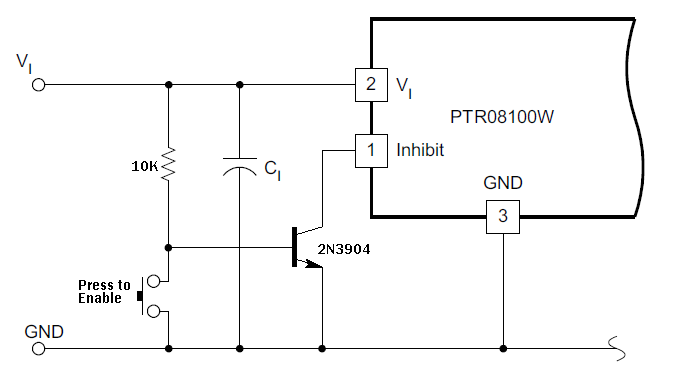 Not the answer you're looking for? Browse other questions tagged voltage-regulator switches or ask your own question.