Why V rms instead of V average?

I'm looking at an equation for average power in a signal

and wondering why it isn't

Simple: the average of a sine is zero.

Power is proportional to voltage squared: 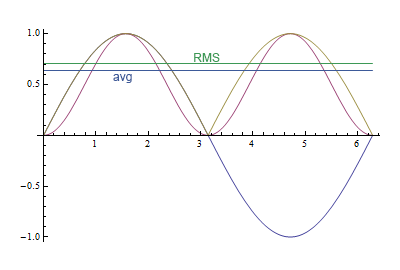 RMS gives you the equivalent DC voltage for the same power. If you would measure the resistor's temperature as a measure of dissipated energy you'll see that it's the same as for a DC voltage of 0.71 V, not 0.64 V.

edit
Measuring average voltage is cheaper than measuring RMS voltage however, and that's what cheaper DMMs do. They presume the signal is a sine wave, measure the rectified average and multiply the result by 1.11 (0.71/0.64) to get the RMS value. But the factor 1.11 is only valid for sinewaves. For other signals the ratio will be different. That ratio got a name: it's called the signal's form factor. For a 10 % duty cycle PWM signal the form factor will be \$1/\sqrt{10}\$, or about 0.316. That's a lot less than the sine's 1.11. DMMs which are not "True RMS" will give large errors for non-sinusoidal waveforms.

The why is simple.

Consider 1 VDC into a 1 ohm resistor. Power consumption is obviously 1 W. Do that for one hour, and you burn one watt-hour, generating heat.

Now, instead of DC, you want to feed AC to the resistor, and produce the same heat. What AC voltage do you use?

It turns out that RMS voltage gives you the result you want.

THAT'S why RMS is defined the way it is, to make the power numbers come out right.

Because the power equal to V^2/R so that you calculate the average of the squared voltages along the sinusoidal wave to get V^2avg. For simplicity we take the average of this mean then we can deal with it as we wish.

The answer is the reason given by John R. Strohm and the explanation is as follows: (requires a few additions to stevenvh's answer)

You see when you send a DC through a resistor and an AC wave through a resistor the resistor get heated up in both cases, but according to the equation for the average value the heating effect for ac should be 0 but its not why? This is because the when the electrons move in a conductor they strike atoms and this energy imparted to the atoms are consequently felt as heat, now AC does the same thing only the the electrons are moving in different directions but the energy transfer here is independent of the direction and so the conductor heats up all the same.

When we find the average value the ac components are cancelled out and hence fail to explain why the heat is generated but RMS equation rectifies that - as stevenvh says by taking the square and then the square root we are transposing the negative portion to the top of the axis such that the positive and negative portions don't cancel off.

This is why that we say that the average and the RMS values of a DC wave is the same.

The same applies to any real world signal (by this I mean imperfect - not pure AC) as Fourier series says that any wave can be replaced by a correct combination of sine and cosine waves and since the frequencies of the waves are higher (integer multiples of the base frequency) they too get cancelled out, isolating the DC component.

The above is the reason that we define RMS value as the equivalent value of DC that generates the same amount of heat as the AC wave.

PS: I know that the explanation for how heat is generated is quite ambiguous but I am at loss to find a better one, I went with it anyway because it helps convey the message

Where did the Vrms equation come from? Why does it work?

Our analysis need only consider a quarter of a cycle. The other three-quarters yield the same area under the curve, the same squares, the same power.

By definition we are looking for equivalent AC and DC power. Power is a function of the square of the voltage (Power=V²/R). Finding the square of a DC voltage is easy. How do we find the square of a voltage changing as a sine wave? You chop up the sine wave and square the voltage at each slice. Graphically, take each voltage slice and draw it as a square shooting out into the z-axis. Add up all the square areas then divide by the number of squares. That gives you the average area (mean of the squares) for that sine wave with a peak Vp. 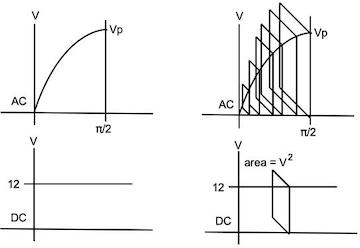 However they are otherwise equivalent.

Why did they pick one definition over the other? Well, one is an average of a differentiatable function.

Not the answer you're looking for? Browse other questions tagged math rms or ask your own question.

3
Why use RMS values instead of "mean of absolute"
1
DC DC Boost Converter - Why that high Ampere?

1
Average Power Formulas
0
Indicated vs. true RMS value of sawtooth waveform
0
How to 'average' a sine wave of RMS values?
0
Full-wave controlled bridge rectifier and the RMS voltage derivation?
1
Confusion between average and rms calculation for power
0
AC RMS and DC average voltage
3
Finding the average and RMS value of this signal
2
Why use RMS instead of the average voltage of half the cycle for power
0
Why is RMS used for P=VI (where there are no squares)?