I have a circuit used to control roller shutters in my home, which roughly can be seen in the schematic below. 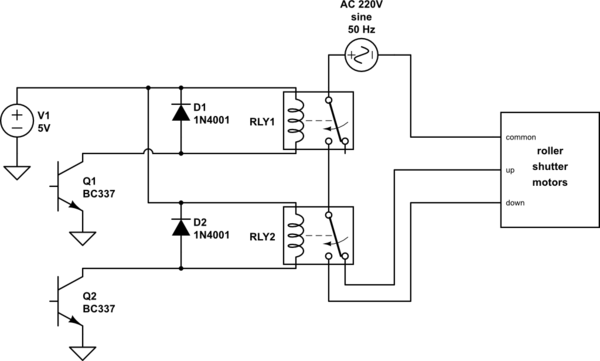 It works, but after some months, some relays stopped working. The relays are rated 16A 250V~, and they operate at 5V. We suspected some faulty components (although they were bought in a reputable store) and after some extra failures I discovered that light "percussive maintenance" solved the issue, so I suspect that the relay contacts were somewhat slightly fused together, if that makes sense. But it's not a full-blown-fused-contacts scenario, just... slightly enough to not switch anymore until gently tapped.

I realized that I had neglected to add a snubber there. I am more a microcontroller guy myself, so I read a little bit on the internet and decided to add a snubber, specifically: this KEMET one which is a 100n 100R. I was hoping it would make sense in this circuit, and was unsure if it was better to put them across the contacts or across the load and I ended up trying it across both common-up and common-down in the cover contacts.

Still, when stopping the shutter movement from either directions, I have sometimes seen sparkles inside one (RLY1) or both relays.

What should I improve, and what are my options? The PCB is done and is somewhat big for a DIY small hobbist like myself. And it is placed in a hard-to-reach small enclosure. I thought that maybe I didn't properly place the snubbers, but physically it's hard to test them in a lot of different positions. I was considering the option to change the RLY1 for a SSR with zero-cross (hoping the zero-cross would solve itself some of the issues), but still, it would mean to redo and patch some electronics and I fear being mistaken and ending up burning the SSR.

Browse other questions tagged ac relay snubber or ask your own question.