I have three DC shunt wound motors in series. Each motor has a coupling to a transmission. I am trying to work out (mathematically, as opposed to intuitively), what happens if the coupling was to drop in one motor (motor 2) resulting in no load on that motor.

Intuitively I know that that motor will speed up and eventually the centrifugal force will result in destruction of that motor if the supply isn't shut off in time.

The supply voltage is 600V so there is 200V across each DC motor. 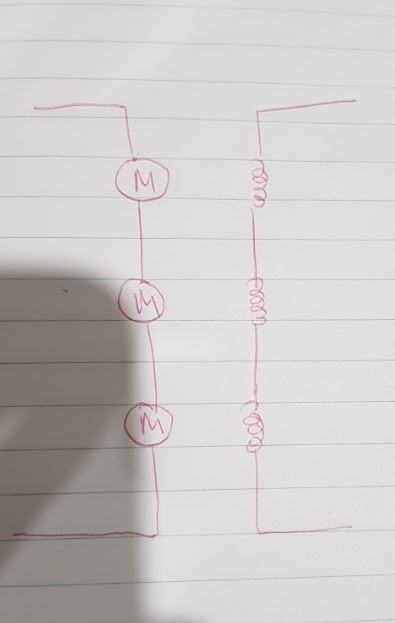 There are two major effects here you might be neglecting:

Effect (2) means effect (1) is compromised a little - motor 2 will start to consume more and more of the string's voltage before it reaches self-regulation.

Thus, intuitively what will happen is motor 2 will start to speed up due to loss of load. Back EMF will increase which will reduce current available to the whole string. Reduction in string current will reduce back EMF in motors 1 and 2 slightly, increasing voltage available. String will find new stable point where voltage is shared and current is same for each motor.

Then when motor 2 loses its load, the distribution of voltages shifts to something like this:

So motors 1 and 3 have halved in torque and therefore halved in speed (same load), while motor 2 has doubled in speed with half the torque (load dropped by a quarter). Motor 2 is essentially robbing the string of its power by over-spinning.

Not the answer you're looking for? Browse other questions tagged voltage dc dc-motor shunt emf or ask your own question.

4
DC motor Armature and Field back emf
2
Why is voltage inverse to current in a shunt generator?
2
Effect on loading a DC motor - load torque
0
What is the concept behind speed change in a constantly loaded DC series motor?
0
Relation between torque and speed in a dc motor(say dc shunt motor)
1
Why does line current become half when load becomes half of full load in a dc shunt motor?
3
DC Series motor and its starting
0
In a shunt DC motor, how quickly after losing the field will the armature current increase to its V/R limit?