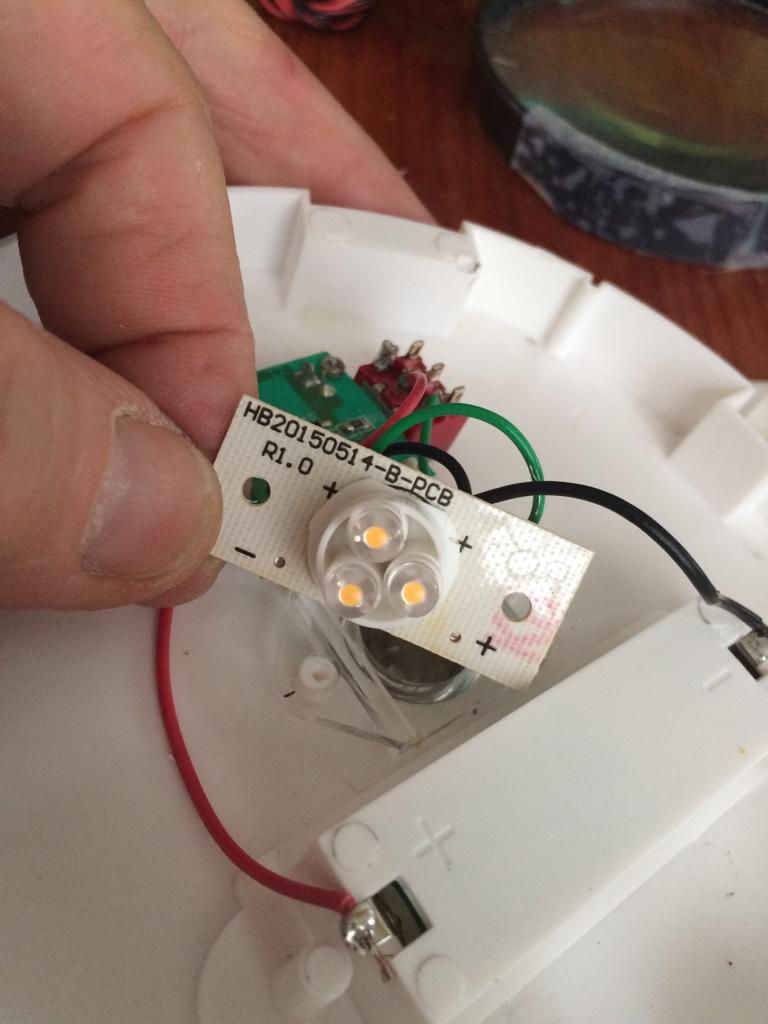 Hello. I hope this is not too novice question. IKEA got stuck with piles of garden solar lighting (their product no 21777) which they sold for 1€ each.

Looking at the back (large solar panel, 2000 mAh NiMH battery, switch etc.) I took seven home (I wish I had taken 20...). I Took one apart to play with it and found a 3-LED block which gets 1.2 V and produces very strong light. What am I missing?

The block does not appear to have any electronics on it apart of the three parallel LEDs. How does the LED work on 1.2 V? 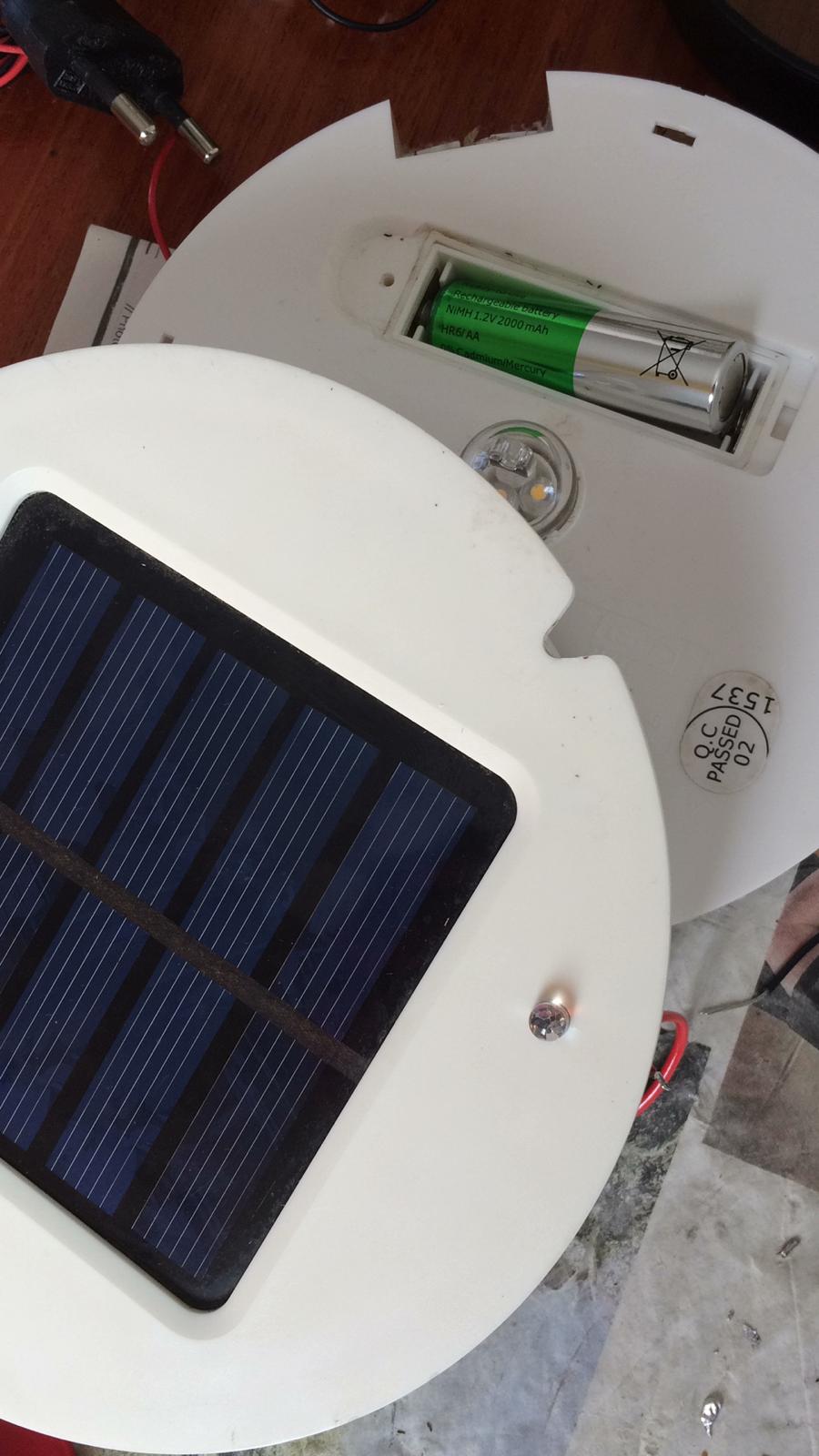 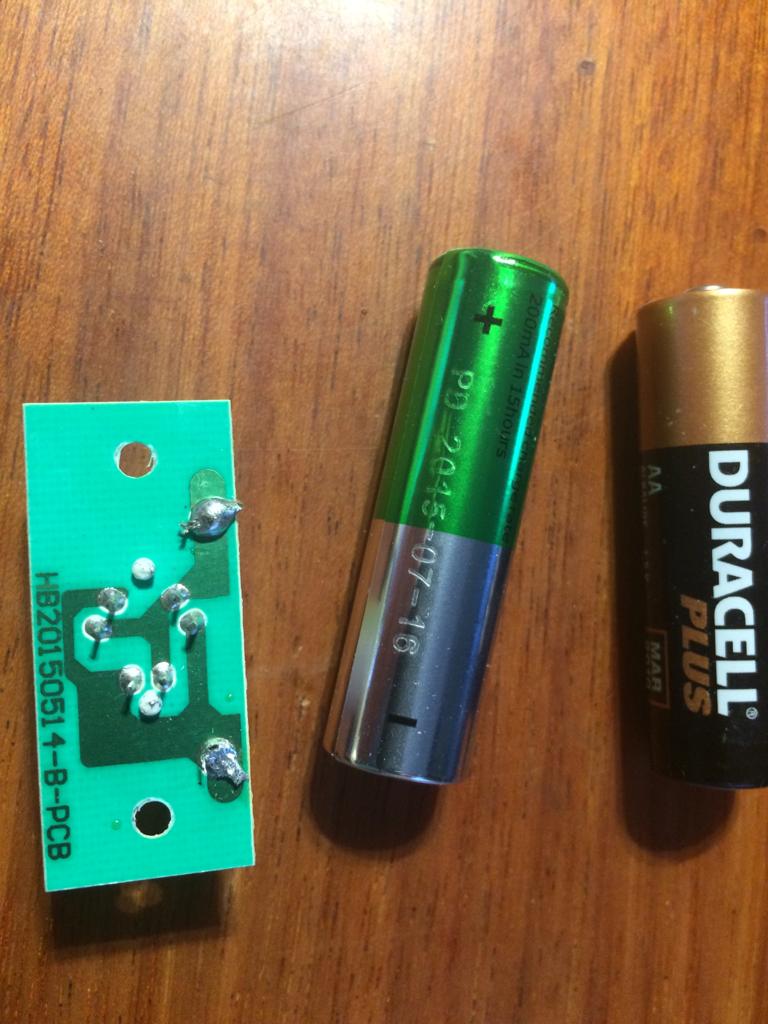 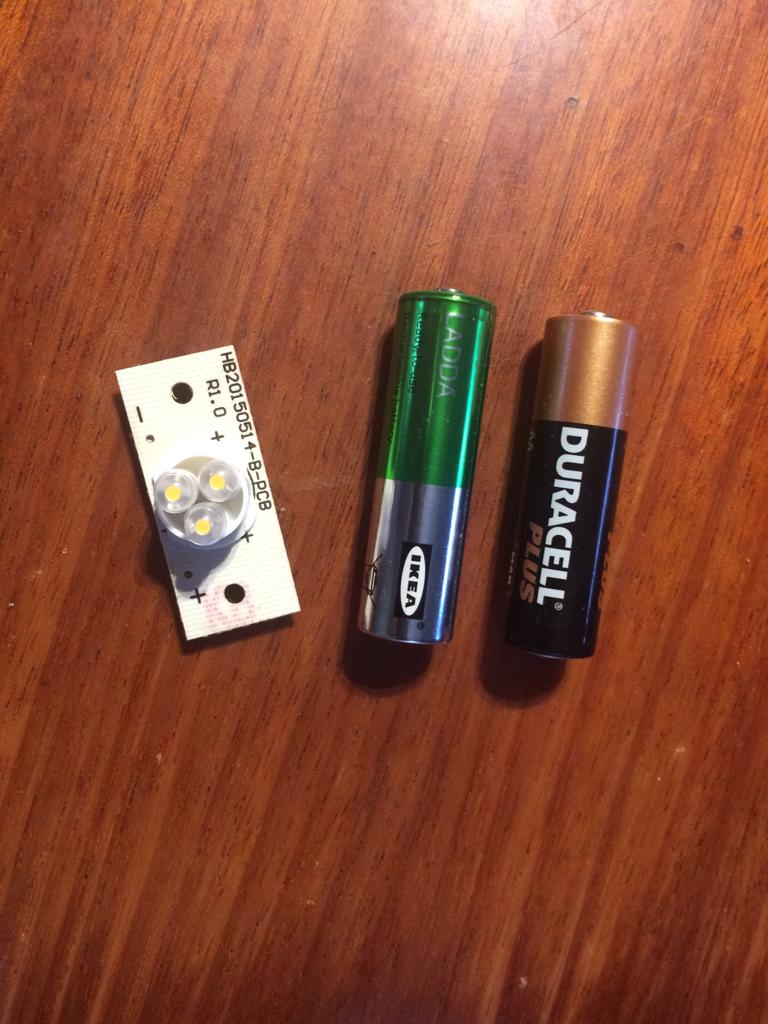 Hello again. I think that SamGibson's answer (with the Scope wave pic) is the right one. The battery is normal size as can be seen in the pic (it also say on it HR6/AA) and the module does not have any electronics on it. BUT the 1.2V DC I measured seem to be wrong (I use basic digital multimeter). as an experiment, I decided to connect the module outside, directly to the battery poles. Nothing !! but when I connected to the circuit it works fine. Changing the setting on the multimenter to AC shows 2.5V. As it is a basic multimeter, I assume that this is also very not accurate, but the the basic experiment shows that there is some sort of boosting circuit on the main board to drive those leds. (Now I just need to figure out why this does not drive my 5mm, flashing blue, LED...) Many thanks to all that help and contributed. All the best.

There will be electronics, since you can't light a white LED directly with the 1.2V from a rechargeable cell - around 3V is needed to light a typical low-power white LED with a low current (a higher voltage is needed for higher-power white LEDs). This has been covered in previous questions on the topic.

One example of such a component (there are many different types you could find in your solar light, so this is just one example) is the YX8050 - a typical solar light uses the schematic 1-2 below from that datasheet: 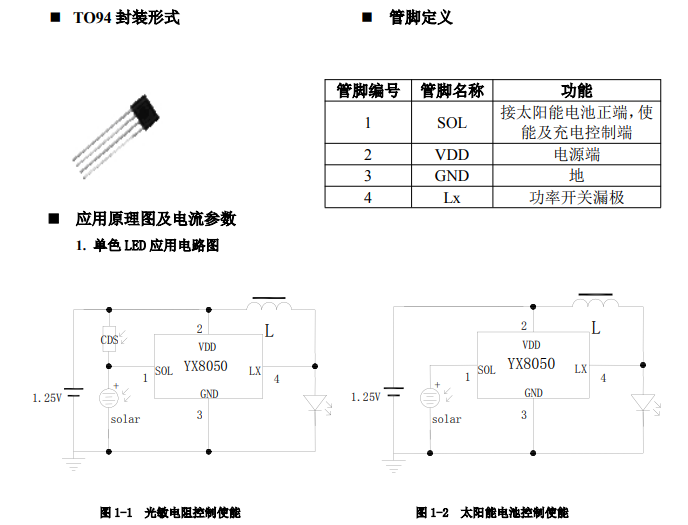 On my bench, I just captured this LED drive waveform from a YX8050 with a single white LED in a solar garden light (battery voltage = 1.2 V):

As you can see, the voltage to the LED reaches 3V with a duty-cycle of around 40% at a frequency of 788kHz. So the LED is flashing, but it's flashing so quickly that it appears to be lit continuously, due to the persistence of vision.

If you try to measure the DC voltage across the LEDs with a multimeter, you will measure a much lower voltage (I measured 1.2V), even though the LED is being driven with 3V pulses. If you could use an oscilloscope to measure the LED drive waveform on your LEDs, you would see something similar to the waveform above.

LED's have a forward voltage, this can be tweaked by the manufacturer for different purposes, generally below 1 V for visible light is hard, but possible to buy (likely infrared or red with a phosphor to bring it up to visible)

This is assuming that green circuit board out of frame on your picture doesn't have some small LED constant current driver.