I want to measure a moving average of the amplitude of a fix frequency, fixed dutycyle PWM signal with slowly varying amplitude but in a noisy environment (DC motors).

I want to use as little as possible CPU power to do this and have the ADC do this for me. I have an internal signal coming from a timer that is in sync with the signal to measure. I can use this as a trigger.

Below is what I try to do: 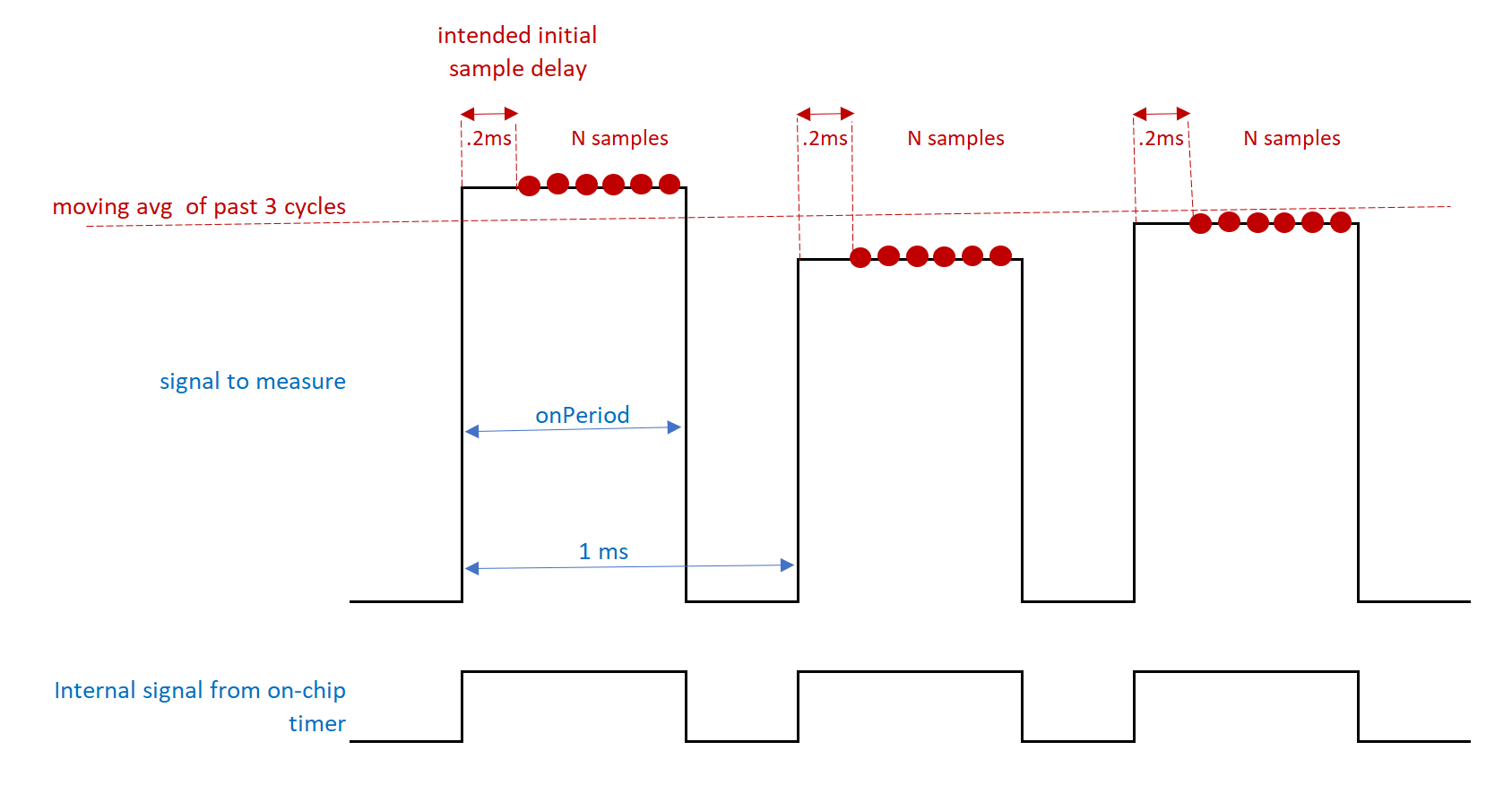 So far, I figured out 1 (interconnect of timer output channel and ADC external trigger) and 3 (oversampling) by reading the reference manual and think I can do 2 by using a basic timer inbetween first timer output and ADC. But I completely struggle with 4 and 5.

If it were only a small number of averages then I would create a shift register.

Pseudo code for a small number of averages.

For a larger number such as the 100 in your question this may use up too much precious RAM in a microprocessor. Instead, I would consider running an "eternal average", averaging all the values since the unit powered up. For example, in your 100 cycle average you would calculate the new average as $$ avg = \frac {avg \times 99 + newRead}{100} $$.

This is very simple and requires only one variable. The downside is that it is a little more sluggish in its response. A quick spreadsheet simulation shows the following with averages of the last three cycles and "eternal average" with a weight of 1/3 for the new reading. 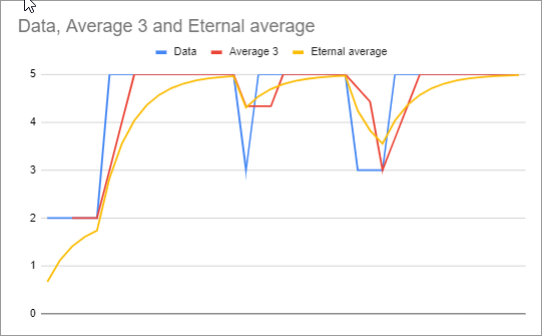 You can try this out quite quickly in a spreadsheet.

The F4/F7 have plenty of memory to handle this. You'll need just over 200 bytes (100 samples * 2 bytes each), which is a fraction of even the smallest F4 chips. A moving average is a type of FIR filter and has some advantages to an IIR filter (such as an "infinite average"), such as that it responds more quickly to changes and will settle more quickly on a value if your ADC readings settle on a value. Often, this means it'll be more accurate at any given time than an IIR filter.

There are a few ways to do a moving average:

1) Use the DMA to write the block of 100 samples. Setup the DMA to write to the address of some variable like uint16_t adc_readings[100], and set the number of transfers to 100, and the memory increment size the halfword. Also setup the DMA to be in circular mode, so it will automatically wrap around to the beginning of the adc_readings array. Start the ADC and DMA and everything will happen in the background, no CPU needed.

Whenever you need to get the moving average value, you'll need to use the CPU, however. Write a function that takes the sum of all 100 values in the array, and divide by 100.

This method is great if you only need to read the average value every once in a while, since there's no CPU load otherwise.

2) Create an interrupt routine for when the ADC has a value for you. In the interrupt, append the value to your array. Something like this:

The advantage of this method is that the moving average is always kept current and is available any time with no extra CPU load when you need to read it. Also, calculating the average each time requires less operations because of the "trick" where you can just pop off the oldest value and pop on the newest one, and update the average by an amount proportional to their difference. The disadvantage is that the CPU is involved with every ADC reading, each time the ADC IRQ is called. So if you go several hundred readings without needing to know the moving average, you'll have some unnecessary CPU load. But if you need to know the moving average quickly, especially if you need to know it with every new ADC reading, then this method wins.

Tip: If your moving average size is a power of 2, such as 128 or 64, then the moving average will be much faster to compute since the divide can be a simple bit shift.

If you do not want to use CPU - which is not possible if you do not use external averaging hardware. Simple lowpass filter will do

Not the answer you're looking for? Browse other questions tagged adc stm32 timer or ask your own question.

2
Measuring tiny voltage variation with Arduino ADC handing the rapid changes in control algo
6
About the meaning of “oversampling”
0
Changing ADC clock speed does not change sampling speed [XMega]
0
Gain Resolution after delta-sigma (ΔΣ) analog-to-digital converter (ADC)
4
ADC driver design for oversampling
0
How to reconstruct input signal by using DAC?
4
Use the oversamplling followed by the “decimation method” to increase the ADC resolution and not normal averaging
2
STM32F303 ADC+DMA Averaging of measurements