I'm trying to power my circuit via a wireless coil module and have a working circuit using a desktop voltage supply at the same voltage (12V). Simply by swapping out the desktop voltage supply with the wireless coil module results in vary unexpected differences in voltage and current within the circuit. I am looking for any possible explanations as to why this could be occurring and how I could verify such an explanation via some test scenario.

I have a more complex circuit, but in order to debug things, I've disconnected everything down to the most minimal example where this problem still persists and present the debugging steps I've tried in the block diagrams below. Although the use of these two voltage regulators is not apparent in these block diagrams, I need them for other parts of the circuit that I've disconnected for clarity here.

All of these voltage regulators and charging modules are premade modules, and I don't have any circuit diagrams for any of them and there are a ton of micro surface mount components, so reverse engineering it would take a fairly extensive amount of work, and I would likely irreversibly break some things along the way, so hoping to avoid this. I've linked to the purchase page I used for each module when I mention them below. 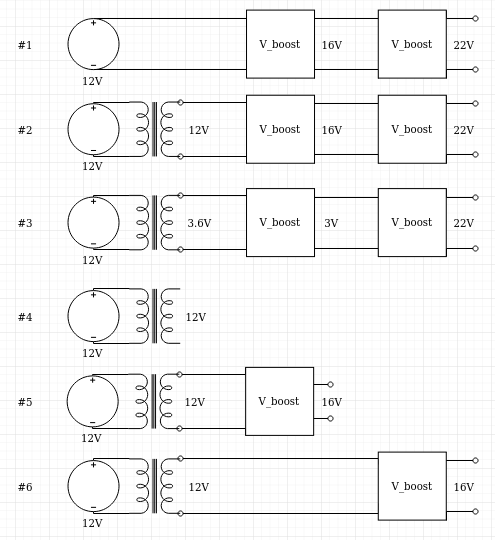 It seems there is something in the wireless charging module that conflicts with the operation of the two voltage regulators in series. Is there something inherently wrong with connecting two buck/boost regulators in series? Do switching frequencies need to be mismatched or something such that I am running into something like positive/negative interference of the waveforms?? I'm grasping at straws here, but this is as far as I'm able to debug this without some further knowledge regarding the inner workings of these regulators and wireless coil modules. Hoping someone can enlighten me or ask some leading questions that would lead to a good test to run.

Does this hint at anything further?

Based on further testing I concluded that the previously mentioned R_L can be excluded and V_buckboost could be replaced with an identical V_boost to still recreate the issue with a more minimal working example. I've edited the block diagrams and original question text to reflect these changes.

Upon request, here are the closest things to schematics I could find based on the seller info and what part codes I could make out under a magnifying glass. These are datasheets with a few example schematics inside.

Although I couldn't find anything in English about the actual wireless charging module chip, based on this it looks like it combines a AC/DC rectifier with a voltage regulator. I tested the leads of the coil vs the output on the module using a scope, and this looks like a sensible explanation.

Finally, a fairly key discovery I just tested was adding a 1000uF capacitor over the input of the 2nd V_boost and tested the behavior.

At first connection, the same issue of over current draw and strange voltages appeared, but after disconnecting, and connecting again (by complete chance) I noticed that everything worked as expected. Observing the scope, showed that voltages over the input of the 2nd V_boost were rising and dropping quite slowly due to this capacitor (as expected), and it seems that if the circuit is started when the input voltage over the 2nd V_boost is high enough (>300mV or so) then the circuit will operate as expected. If you let the capacitor drain any further than this, and try again, it will fail. And by fail, I mean regardless of how long you wait, it will stay in this failed state, drawing about 1.1A, and I burnt through one of my 600mA rated wireless transmitter chips in the process. So it seems I have to find a way to provide some initial voltage at the input of the 2nd V_boost in order for it to initialize something properly.

I'll have a look into the datasheets of the V_boost chips a bit more. Maybe there is some safety feature that is shutting things down when it sees a current draw at low voltage or something. I'm also still dumbfounded as to why the tabletop supply does not run into this issue. Will keep troubleshooting. Thank you for everyone's helpful comments so far!

Since SMPS have very nonlinear Z(t) especially during startup , one must appreciate these effects are amplified by square of the out/in voltage ratio but attenuated by cap ESR and soft start design methods.

Some control current on each cycle and others averaged cycles . Resonant methods demand a low ESR input cap to attenuate Flyback interference with forward regulation. The in/out impedances must be as low as possible but no lower such that it attenuates voltage error feedback and reduces servo voltage phase margin.

Anecdotal: I once design a 5V PWM buck to drive a low power PFM boost for an AMLCD bias and the boost inductor was so noisy in the lab it sounded like a whitewater stream. This is well-known in chaos theory, a metastable condition of impedance interactions of Buck noise driving a PFM boost with piezo-acoustic outputs and was suppressed by a larger low ESR interstage cap.

Not the answer you're looking for? Browse other questions tagged voltage-regulator switching-regulator wireless-charging or ask your own question.

0
How does this wireless charger work?
1
Wireless Power transmission. Is it possible to achieve 100-200w (load side) power using off-the shelf components?
4
How to build a self-made Qi compatible (wireless) charger
1
Is it possible for a Wireless device charging pad to fry RFID / Contactless cards?
1
Is this quote about interference from wireless charging coils accurate?
1
Magnetic Field Interfering with Radio Waves
0
Efficiently rectify 18-20V to 12V AC-DC for wireless charging