What *fuses* an electric fuse?

I build a quite lot of projects to learn electrical engineering, and since I was first introduced to what's called a fuse around 2 years ago and I always put one in my high voltage 220V mains for protection, but when I worked with precious LiPo batteries, I wanted to add a fuse for protection.

I wanted to know if is this normal for an electric fuse, or my fuse is very bad manufactured? As a side note my fuse works perfectly fine in 220V circuits

I done a bit of research if there is anything called low voltage fuse, found some webpages,but I couldn't understand anything

One of the pages I saw is: here

My fuse type is the normal glass fuse. 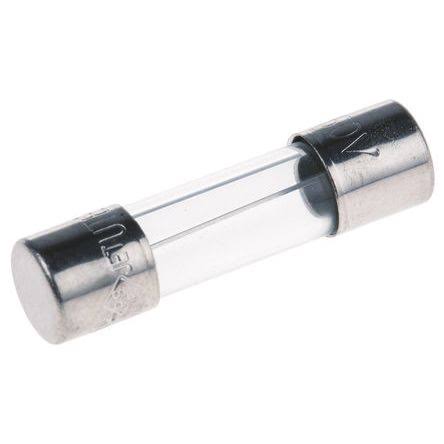 this is not my image, source : here

In short what pops a fuse (sorry but is pop the right word to use in such thing?) Is it the over specified voltage or over specified current or it's the power through it? And in the other side what kind of fuses used in low voltage application like fuses in digital multimeter? Is it the same fuse I have?

Fuses blow due to heat, and heat is due to current via \$I^2R\$. Therefore, what blows a fuse is the current.

However, a fuse needs to blow with a large enough gap that the voltage behind current cannot overcome the gap. A fuse with a 1mm gap isn't going to be able to interrupt a current with 10,000V behind it (it might make a massive, long-lived arc that eventually extinguishes at best, and at worst the 10,000V will cause sparks across the gap or melt and weld the gap.) That's what determines the voltage rating of the fuse. The voltage rating is irrelevant while the fuse is not blown.

High voltage fuses do have different features such as sand or other materials that melts or buries the contacts when the fuse blows to reduce arcing or explosions.

I cannot explain why it took 1-2 seconds to blow at 1600% overload though.

Because 220V is typically AC and I doubt you bought an expensive DC fuse:

Never use a AC fuse for a DC application.

It is quite possible the fuse in your application arced for a small longer time due to the LiPo battery providing DC current.
Once an arc is established, its length is only limited by the available energy, not by voltage.
The melting of the internal wires will also continue, increasing the length of the arc. The arc will eventually cease due to the application failing to provide enough energy to sustain the arc.

A fuse is just a very low-valued resistor with the intention of self-destructing under specified circumstances. The "low-valued" aspect is application-dependent. It's possible to have a fuse with \$10\:\Omega\$ that would be good in one application and terrible in another.

A conventional fuse like yours will experience ohmic heating. If this becomes sufficient to cause melting, the link material may have been selected so that it constricts (pulls apart) and one or more arcs form (fast blow.) This greatly increases the circuit resistance and its Ohmic heating and, in rapid progression, it consistently "fails open" and the circuit is interrupted. (As it is intended to be.)

Not all fuses are alike in the way they self-destruct. Materials are carefully selected. Those materials that rapidly constrict will be fast-blow. Other materials are more like a conventional wire and heat up gradually and eventually fail. These are slow-blow. Hopefully, all of them are well-designed for their application.

The design involves not only the selection of an appropriate conducting amalgam for the fusing wire, but other additions to modify the overall behavior (a larger, added dissipation surface over part of the fuse, for example.) It also requires extensive testing against manufacturing variability (no two are exactly alike, but all of them must behave within prescribed parameters.)

As a fuse begins to fail open, as the material changes state from a solid towards either a liquid or gas, energy that once was increasing the sensible heat will instead go into latent heat during that transformation. This is transition between the pre-arc and post-arc time periods. The Meyer integral is often used to compute the pre-arc phase.

Physicists would prefer action, as the fusing point is really measured in Joule-seconds (and Planck gave that the name action a long time ago.) There is both a melting integral and an arcing integral for a fuse. These, when summed, are called the clearing integral of the fuse. You won't usually see all those details from manufacturers, though.

The basic idea of a fuse is that you need to deliver a certain number of Joules and do so within a certain amount of time (or less) in order to guarantee the fuse opens. This is also called the all-fire specification. So, for example, you may have a fuse that gives an all-fire specification of \$500\:\text{mJ}\$ in \$50\:\text{ms}\$. You need to know details of the fuse to know if you can achieve this, of course. But note that the all-fire specification avoids details such as current, resistance, etc., as it's really about material science and the fuse structure and physical design and expected operating environment.

Most manufacturers will instead only specify the melting integral. This is often found under a table column labeled \$I^2\,t\$. The manufacturer units are wrong, but it does specify the important details. The complication is that the resistance of the fuse evolves as it opens up and specifying the units that physicists like wouldn't really be of much help to engineers. And since the action is proportional to \$I^2\,t\$, that's sufficient for all engineering purposes. Keep in mind that \$I^2\, t\$ is usually only valid under adiabatic conditions, without external heat transfer beyond what the manufacturer can normally predict. If you do something extra that provides added routes for dissipation, the fuse will behave differently.

Primarily, it's the current that blows a fuse. The fuse has no way to know what the voltage of your circuit is. The 220V rating stamped into the fuse is the maximum voltage it can safely break. If you use it in a circuit above the rated voltage, then instead of breaking the current, it may just arc across the terminals.

When subjected to a large overload, you can use the manufacturer's I²t rating to estimate how quickly it will blow. So if a 250mA fuse has an I²t of 0.25 and you put 10A through it, it should blow in time t=0.25/100 seconds.

At lower currents, you would need to look at the curves in the manufacturer's data sheet to see how quickly they are likely to blow.

The time it takes for a fuse to blow varies considerably, by design. Ones stamped "T" are slower, and ones stamped "F" are faster. Slow-blow fuses are intended for protecting circuits where a large current surge is expected on start-up.

You also need to allow for the resistance of the fuse itself. The fuse you used may have had a resistance of around 0.6 ohms, which means the current you were putting through it was less than what you expected.

Not the answer you're looking for? Browse other questions tagged protection fuses or ask your own question.