Does anyone build 100k RPM alternators?

What I'm contemplating is the practicality of building a direct drive turbine-alternator (or generator) system out of an engine something like this.

Based on some reasonable guesses, that would take an alternators rated for something like 50-120k RPM and a 1-2 kW. Is anything in that range built or should I assume that some reduction gears would be involved in any practicable design?

If there isn't anything in that range, how close do things get? For example, if 400Hz single poll alternators are built, that would be 24k RPM which would only take something like a 2:1 or 6:1 reduction gear set

It is possible to build a direct-coupled alternator/generator. Both the alternative energy industry and US Department of Defense have been investing in this area for several decades. What's attractive about direct drive turbogenerators is the extremely low power/weight ratio, even though efficiencies are awful at this scale.

Capstone Corp has been doing this for awhile in the 60kW class, mostly for backup power (natural gas-fired): 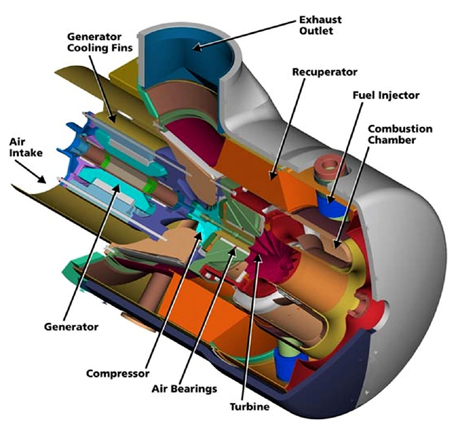 Others are working on smaller scale units - in the 300W to 5kW range, also direct-drive. I have not seen much traction in the industry at these sizes, however.

Is it possible? Yes.
Is it practical? It depends on the application's ability to trade mass for cost.

For a bit of additional context: there exists a particular design of alternator suitable for high speeds, such as those obtained by direct turbine coupling. Those were developed primarily for use in ICBM power supplies, where weight is of value while excess overheated gases are essentially bundled for free.

It must also be noted, that first ever turbo-generator, developed and demonstrated by C. A. Parsons in 1884, was of direct drive type running at 18k rpm (with rated power of 7.5 kW).

I realize that this thread is dead, but just for posterity, a company in Boston, MA, Satcon technology, produced a dual turbo alternator drivetrain for an american le mans car back in 1994. The budget was paid for by Chrysler. The high speed turboalternator I think turned at 100krpm and the low speed at 50krpm. Both of these devices ran on liquid methane for fuel, and were direct coupled devices. They delivered power to an 80lbs carbon fiber flywheel turning at up to 60krpm. The power was then delivered on a demand basis (the gas pedal), to the traction motor, so the flywheel in turn was a high speed alternator. The traction motor was a water a cooled, vector controlled, squirrel cage induction motor running at up to 24kRPM with a torque of 350 ft lbs of torque to 12kRPM, and 150% of that torque at 0RPM. The project budget was originally USD35 million for 3 motors. All of this technology, including the driver circuits and controls were developed and a lot of them were patented by Satcon Technology. They're still around, but I'm not sure if they can still develop this type of tech. The car was deemed not viable due to concerns with the flywheel. In other words, the rest is practical, it's just that if the car crashed, and was turned upside down the flywheel would most likely shatter, the flywheel parts would most likely go through the housing, then through the LNG tank and through the driver.

From what I remember, the electronics weighed 110lbs (managing 3.5MW), and the traction motor around 150lbs. The turboalternators were tiny, and were probably the lightest part of the bunch.

Here's a link, but don't take what says all it says literally. Satcon had at least 50 engineers working on that project, and every single part in the project required developing new technology. In this article they throw the blame on Satcon, but to this day I'm amazed that the thing even worked (and it did, in the lab):

As I understood the question, is it possible to make a turbine-generator set to run at 100krpm. first what is the return from building such a set or what is the advantage of this set over the exciting ones. For power system designe generators should run to give voltage and current with a frquency of 50Hz or 60Hz internationally, this frequency is related to the speed .....contin.... later

Short addendum to the other questions: you cannot use a thrust turbine motor to generate axle power efficiently, or the other way around. These are almost fundamentally different types of continuous combustion generators. If you want to use a turbine to generate electric power, try finding miniature helicopter turbines. These are designed not to generate thrust in the exhaust gases but to create lots of torque on the axle.

If all you want to do is create the most electric power in the least amount of weight and space, Wankel (rotary) engines are a great choice as well. These run at 15-25krpm, which is well within the range of commercially available DC direct drive generators. A company called EVDrive has a range extender of this type (25kW Wankel engine+electric generator) the size of a briefcase.

I think your expectations are unrealistic unless you have a government budget behind you. There are better ways of getting high power from a small unit, dependent on your exact usage case, restrictions, etc.

There is a military pocket-sized generator that runs on diesel, I can't find a link now (possibly it's discontinued or been taken down) but it seems to me that spinning things at thousands of RPM is throwing a lot of engineering challenges up that other methods would avoid, especially when you also need it to be small & light.

I would start with a blank sheet of paper and look at what the root problem is you're trying to solve (X amount of kWh from a device weighing no more than Y / no bigger than Z) then start looking at which technologies might suit best. You may end up with something completely different.

Generator rotor vibration would make it unlikley match as the rotor and bearings would weigh more than the turbine rotor.

Best to use the Heli rotor reduction gears that are designed for that motor with centripetal clutch. 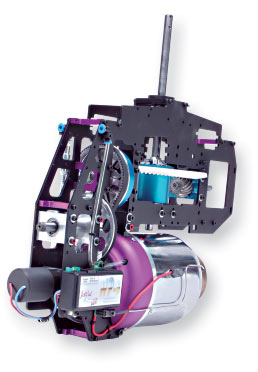 The generator load profile needs to match the turbine/gear reduction for RPM and power avail. I might suggest a Japanese motor of a certain brand ,but I dont have 1st hand experience.

Not the answer you're looking for? Browse other questions tagged power motor or ask your own question.