I want to use a switching boost converter that has 3.3V output in order to power an SD card. Also, the input voltage is a CR2477 battery, with voltage ranging from 2 to 3 volts. I have seen that an SD card may require up to a maximum of 100mA during writes. As a result, I found this boost converter: TLV61225DCKR .

As you can see in the link above, the output current is said to be 400mA on the site. However, by checking the datasheet of the converter, I found out that 400mA is the switch current limit. Furthermore, from the datasheet, I saw this figure: 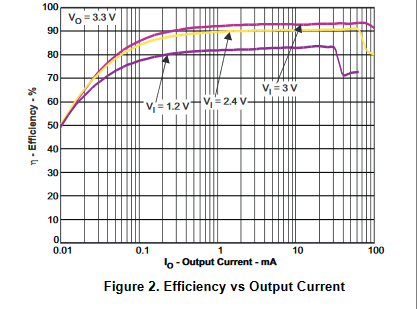 This figure was the only reference I could find for output current, and the problem is that the efficiency falls dramatically at around 100mA, where the axis ends. I do not understand why on the farnell site the output current is rated as 400mA. Is this an error of the farnell site? Also, could you explain what exactly is the switch current limit "Isw", as mentioned in the datasheet?

Lastly do you have any recommendations for such a boost converter? The important aspect is to be as efficient as possible during those 100mA peak current writes.

That battery can't provide such currents, not for the SD card, and not for the booster. Maximum current draw is typically 15mA. It is meant for typical 0.2mA loads.

The SCL is essentially the peak current you can have in your switching waveform. If you want 100mA out, you'll need a pretty large inductor with 160mA minimum SCL. That's why the efficiency drops off at higher currents.

You may need to consider your choice of battery as well. Coin cells aren't particularly good at switching larger currents, and have a very low life when delivering high currents with a large duty cycle. For this type of battery, 20-50mA is a high current, and you'll need to deliver over 200mA for writing in your application.

Not the answer you're looking for? Browse other questions tagged power-supply datasheet boost sd efficiency or ask your own question.