I have a regulated power source supplying +/-48 VDC that I would like drop to +/- 24 VDC. I think linear regulators are the way to go here since they are powering an audio circuit. I would like to use a pair of regulators, such as 7824 and 7924, but those particular ones have a max input voltage of +40 VDC and -40 VDC.

Are there similar regulators with higher maximum inputs? Nothing shows up on Mouser. If not, am I correct in thinking the best option would be to use transformers?

Alternatively, the device to be powered also has regulators at the input (can't quite see their model numbers, which are obscured by heatsinks), so maybe some sort of resistor-based solution would work?

edit: Since there were some questions about the power supply: it's not a standard power supply. The whole system is a guitar combo amp that was essentially built from a rackmount preamp installed into a powered speaker. The power amp had a +/-48V tap that was powering the preamp. I wanted the option to use the preamp separately, so I converted the preamp to use a separate +/-24V power supply, which had the added benefit of removing some resistors that were overheating and burning the circuit board. However, when using the whole system as it was originally designed, I'd like the option to power the preamp from the 48V power tap.

I suggest a separate power supply or two DC-DC converters as the easiest solution.

For audio you could use simple emitter-follower zener regulators, but the problem of burning off heat will still be there. Eg. (Q1 could also be a Darlington pair) 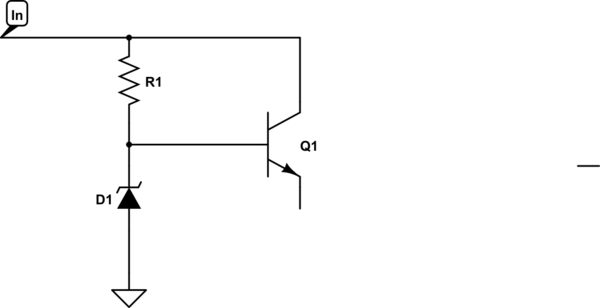 The same circuit, flipped with a PNP power transistor would be used for the negative supply, and resistors could be added in the collector to burn off some of the heat. The calculations depend on the current requirements. It's easy to find TO-220 transistors or Darlington pairs good for 60V or 80V.

It's not inherently short-circuit proof and the efficiency is terrible. You could also use these as pre-regulators for 3-terminal regulators but that doesn't help much.

The 24V suggests a relatively high power amplifier, which means the horrific lack of efficiency is going to be an issue.

For the 48V to 24V you can use a buck converter such as TPS40200 which accepts input voltages up to 52V. There are varieties on Texas Instruments websites under buck converters.

To obtain -24V from 48V, it might be possible to use TPS40200 using information from those documents.

Not the answer you're looking for? Browse other questions tagged voltage-regulator dc-dc-converter or ask your own question.