I just read this article, Microcontroller drives piezoelectric buzzer at high voltage through one pin, and it sounds too good to be true. 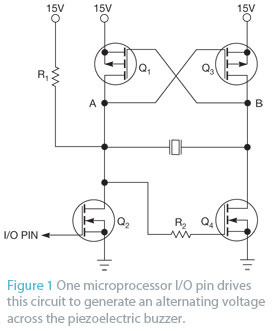 This article was published in a well known journal, I guess it must be tested design. But somehow I wonder if there is a catch. So my actual questions are:

why is this circuit not so commonly mentioned on microcontroller forums? What is the catch with this design? Is this a really simple bridge load piezo speaker design that could be used for PWM driven audio amplifiers? Is there an amplifier class (eg class H) that this falls into? Is this too good to be true?

Looks as if it's not intended as an amplifier, but a maker of loud noises (square waves only) such as for alarm signals.

I suppose you could drive it from a PWM output and it would sort-of work; the only place you could put any filtering would be in series with the speaker itself.

Because the other three transistors are driven by Q2, they cannot switch until after Q2 has switched, and that asymmetrical delay may do bad things at PWM switching frequencies. A little thought will show that Q1 cannot turn off until AFTER Q2 has turned on, for example; creating a momentary short circuit across the PSU...

So my verdict would be: it's fine for alarms, but needs more analysis or testing before serious use in PWM applications.

This design is not for speakers or related to PWM

Not the answer you're looking for? Browse other questions tagged amplifier piezo-buzzer or ask your own question.

10
What's the function of the diode in this driver connected to a piezo buzzer?
3
Piezo speaker with distorted sound
0
What kind of amplifier do I need to drive a piezo multi layer ceramic speaker
1
Bidirectional DC motor driver from single analog pin
3
How (not) to leave class-D amplifier's input hanging
0
How to substitute something modern for the TDA2003?
4
Single input controlled full H bridge for piezo buzzer
0
Are passive piezo speaker more reliable than magnetic ones?