Problems getting correct readings from ACS71020

Me and my team are developing an LED light controller for street lighting applications.

We are trying to measure current draw, voltage and power consumption using Allegro's ACS71020 but the readings don't seem to make any sense. We have achieved a successful communication using I2C, since we can write and read multiples registers. For example, we changed the default slave address to 0x45, and to do that we had to write the customer code to a specific register, and then set 0x45 address (which involves another write operation). After that, we read the register that holds the I2C slave address and it appears changed. So we take from that that we're reading and writing successfully.

We're testing this IC using the evaluation board ASEK71020KMAB-090B3-I2C. We're using two different step-down circuits (recommended by the chip documentation), which are shown in the schematics attached (let's call circuit 1 to the purely resistive one, and circuit 2 to the one with capacitors).

Here's another schematic showing the hardware setup, where the step-down circuit can be circuit 1 or circuit 2 (the image shows circuit 1). 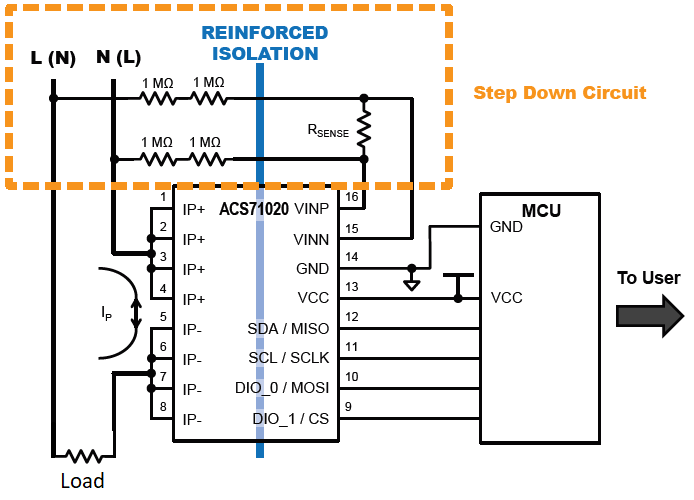 We're working with a 220V/50Hz power source. For the circuit 1 we're using an Rsense of 2.2k and for the circuit 2 a 1.8k resistance. From these values we have calculated a Full Scale Voltage of 500V for the first circuit and 610V for the latter, using the formulae on the documentation. We used 90A as the Full Scale Current. After reading the corresponding register (0x20) for the Vrms and Irms readings we use the following code to decode the reading.

Where RXData is an array that stores the received bytes from the I2C reading operation in the order specified by the acs71020 user guide.

The next two tables contain the data obtained from the chip:
Table 1: The lightbulb is off

Table 2: The lightbulb is on

Here's the C code we're currently using to get the readings:

Those are for current and voltage, the procedures for power and power factor are similar.

We believe something is wrong with the setup in the chip. We couldn't find any examples of the chip configuration settings. Current state of the configuration registers:

What are we doing wrong?

I hope to get some help! Thanks in advance

Ok, I've done some testing and i've found out that as stated in the cover of the datasheet the power supply of your ASEK71020KMAB-090B3-I2C and your Micro-controller unit needs to be isolated. You should be able to test this out by powering it all from a laptop using only it's battery (it shouldn't be charging otherwise it wont be isolated).

This fixed my issues with random readings and it should fix yours also. If not you ought to check the code to convert the binary number into a float or integer. In your case your IPr or fullscale current should be 90Amps you should check that out too.

qvo_fine Offset adjustment for the current channel.
This is a signed 9-bit number with an input range of –256 to 255. With a step size of 64 LSB, this equates to an offset trim range of –16384 to 16320 LSB, which is added to the icodes value. The trim is implemented as shown in Figure 14. The current channel’s offset trim should be applied before the gain is trimmed. “qvo_fine” is further described in Table 1.

In a more definitive project you need to buy a transformer or a ready made isolated power supply that can power all your electronics.

Diogo FerreiraDiogo Ferreira
3144 bronze badges
New contributor
Diogo Ferreira is a new contributor to this site. Take care in asking for clarification, commenting, and answering. Check out our Code of Conduct.
\$\endgroup\$
add a comment  |
2
\$\begingroup\$

We finally found the problem: At some point, we accidentally overwrote the trim registers. We got extra ACSs (but 30A version this time) and it is working reasonably well. Thank you!

As for the code: We're using TI's MSP432 as MCU, and we're using TI DriverLib to get the I2C working. As for the "decoding" code, here it is:

I hope you find it useful!

Not the answer you're looking for? Browse other questions tagged microcontroller power sensor or ask your own question.

3
Problem writing to MCP23017 I/O Expander registers (i2c)
2
GY-521 Unable to set PWR_MGMT_1 register - can't disable SLEEP mode
1
Using on chip I2C on NXP P89LPC954
13
Addressing registers with I2C STM32F0 HAL libraries
0
Information-Freezing values in data registers of compass module?
2
Why is my I2C device (VCNL4200) sending all zeros when I read from it, regardless of register?
2
Upgrade user application using custom bootloader via UART (STM32)
2
Trouble getting I2C working on STM32 (stm32f103c8t6)
0
Getting unexpected I2C Slave Address from a LSM9DS1 sensor and reading the wrong data from the register I just wrote in