How would I wire this battery to the tablet?

I purchased a replacement batter for an old tablet -- and was prepared to follow the instructions to install it.

Unfortunately, the replacement-battery comes with wires coded differently -- whereas the original is connected with:

Suppose, I plug in the tablet's charger and measure the voltages on the existing contacts -- how will I determine, which wire should go where?

The same battery is marketed for a different tablet, which uses a 5-pin connector. Here are the replacement instructions for that one -- maybe, the picture of the circuit and the batter can help?

First: Look at the documentation (datasheet) of the battery. They should have the wires labeled in that. If not, read on:

I would first find the power lines (so + and ground) using a multi-meter. From there, take note of that and tape the leads for that up (so it doesn't accidentally short). After doing so, we have 3 wires left. In this image 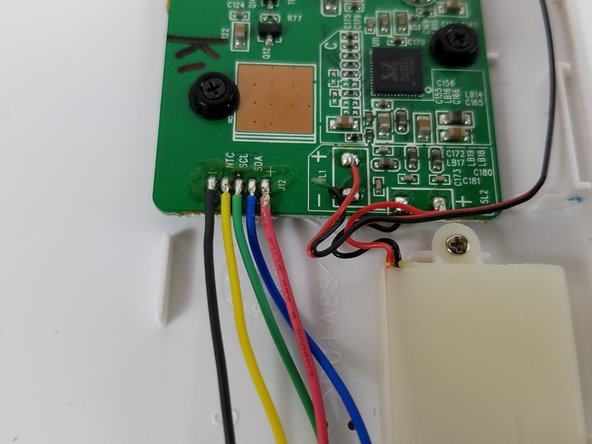 you can see that the other 3 wires are for NTC, SDA, and SCL.

Now, SDA and SCL are self-explanatory (they are for I2C communication). With that said, I believe NTC stands for non-linear resistor which is usually used to measure temperature (which makes sense in this case as you are charging a battery. The last thing you want is the battery to overheat) Finding the NTC wire will be finicky but my first idea would be to use a multimeter in resistance mode and start measuring the resistance of the white wire to ground. Why the white wire? It's just a guess but I suspect that it is the NTC wire.

After doing this, start breathing on the battery (very heavily, or quickly blast the battery with a hot air gun). If you are breathing, do that for 20-30 secs and if you are using the hot air gun, turn it to maximum temperature, high airspeed and shoot it for less than 3 secs. If there is a notable change in resistance, you found the wire. If not, move to the next one. Do this for both sides of the battery (heating it up). In between, let the battery cool down for a solid minute. Repeat this process until you have found the NTC wire.

Now, finding the SDA and SCL wire can be a game of luck depending on what tools you have. If you have an oscilloscope, hook up your probes to one wire and turn on the tablet and just watch the signals. I am not an expert in figuring out SCL and SDA from oscilloscope readings but there are probably articles on this (just google it).

In case you do not have an oscilloscope, my only suggestion is to just guess which wire is the SDA and SCL wire. Solder everything to the board and if it doesn't work, all you need to do is switch the SDA with the SCL. Worst-case scenario is that the battery does not charge (I assume there is a startup command the controller sends to the charger. If you have the wrong wires, nothing will happen as the command will not have been successfully sent).

Not the answer you're looking for? Browse other questions tagged batteries battery-charging wiring or ask your own question.

3
How should I wire two batteries to make my mobile DVD player work longer?
0
Is it OK to replace a 300mAh tablet battery with a 3000mAh one?
2
Replace a three wire tablet battery with a two wire one
0
LED circuit is draining AA batteries REALLY fast
0
Determining how to make 7-wire AC motor run without wiring diagram
3
LED's for a project won't work in parallel
1
Can someone confirm how to wire this air pump?
0
How to properly wire a five color RGB LED strip?