I am implementing the following oscillator circuitry on my breadboard: 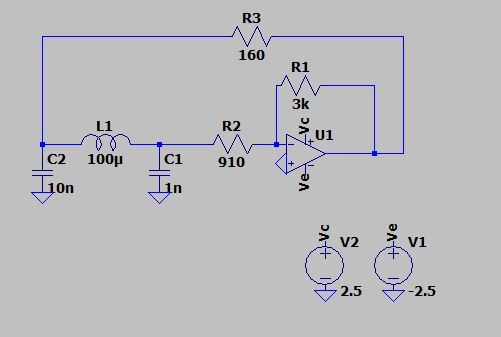 I am using the LM324n op amp and a solderless breadboard. The oscillator is tuned at about 500KHz resonant frequency, but when I hook my scope's probes there is no signal present at the output. could this purely be because of the breadboard? (coupling/decoupling, capacitance between traces and ...) or is it a faulty IC, since i think this specific IC has been lying around since late 90's! but it seems to work fine when working as a normal inverting amplifer.

I also tried reducing the gain (before theoretically stopping the oscillation) to check if its the GBP value being exceeded, but to no avail.

any help would be greatly appreciated.

The LM324 has not got enough open loop bandwidth to sustain a gain of 3.3 at 500 kHz. Try running at a lower frequency to prove this. If you made the inductor 1000 uH you would get oscillation: -

But see how the op-amps's slew rate limiting is converting this into a triangle wave. If you went even lower in frequency (L = 10000 uH and both capacitors at 100 nF) you will begin to see a sine wave evolving from the noise: -

But, because there is nothing in the circuit to limit gain (yes, you need a gain control system in a sinewave oscillator), the sinewave gets bigger and bigger until it hits the maximum output swing that the LM324 can muster. It's now a sort of square wave.

Not the answer you're looking for? Browse other questions tagged operational-amplifier oscillator resonance oscillation tank or ask your own question.