I recently purchased a new soldering station (Aoyue 936). This is my first relatively good quality soldering tool, so I want to ensure I maintain it properly.

My question relates to tinning the tip once I am done using it. The manual which came with my product says:

"When you are not using your iron, make sure you leave a large lump of solder on the tip. This maintains the tinning of the tip, and the tip will last much longer."

However, after substantial reading around the internet, I can't find any such suggestion for tip maintenance. So my question is, when I'm done soldering and am putting it away for storage, do I simply melt a big glob of solder on the tip and put it away, or melt solder on the tip, wipe it off on the sponge, and then store it.

Note: When I try the latter method, the tip initially looks shiny, but after a minute, it gains a slight copper colored tint.

Leave the solder on the tip.

The tip of most soldering irons are iron plated copper.

As such, if the tip is exposed to the atmosphere, it will rust.

Now, typically, there is a layer of solder which coats the tip. However, if you wipe the tip off, the solder coating remaining is very thin, and can oxidize through, allowing damage to the actual iron plating of the tip. Leaving a heavy coating of solder on the tip (e.g. the "blob" the manual describes) is indeed a good way to preserve tip life.
However, the great majority of tip wear occurs when the iron is hot, as the increased temperature dramatically increases the rate at which the tip will oxidize and react with the solder, so it's not absolutely critical you leave solder on the iron tip when you turn it off. It's a good idea, but it's not absolutely vital.

It's also worth noting that the solder blob will probably protect the tip from light mechanical damage during storage as well.

During normal use, the mechanism that wears through the tip plating is different. Basically, over time, the iron plating actually dissolves away into the solder. However, there's not much you can do about this, short of using a fancy soldering system that reduces the iron temperature when it's in the stand, which reduces the rate at which the iron dissolves away (at least when it's in the stand).

During normal use, you should never wipe the tip before placing the iron back in the stand. You should always wipe it after removing it from the stand, before actually soldering something.

Solder is the answer, but you need to make it stick, first.

The best product I have found for this is called Tip Tinner. It looks like this: 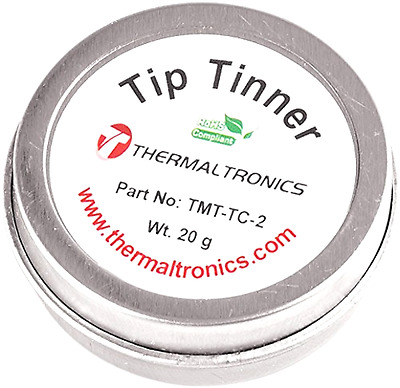 I use it every time I heat up the iron, then wipe it off on a damp sponge. Then after use I put a tad more on it as I shut the iron off.

3
OK to tin soldering tip prior to shutdown?
38
Soldering Iron Maintenance
25
How to clean my soldering iron tip or how to determine that it's beyond repair?
40
Solder does not stick to tip of soldering iron?
16
Going through Soldering tips quickly
17
Why can't solder stick onto the tip of my iron?
11
Why does solder turn dull grey on my iron and exhibit poor wetting?
8
Damaged soldering iron tip