Cellphone charger has no transformer?

I opened up a really tiny mobile phone charger I have, to see how it is designed. The entire "charger" is integrated into a small 2-pin mains plug, 1 x 1.25 x 0.5 inch, that has an USB socket for the phone's USB charging cable.

I could not find anything that seems to be a transformer anywhere in the circuit, and yet I have tested that it is an isolated 5 volt well-regulated output. The tiny flexible PCB has merely a dozen or so SMD parts, ranging from 0402 to 4516 (metric), plus the connectors at the two ends, for mains and for USB. The SMD parts all have part numbers sanded off.

Responses to comments: This is a no-name "Hi-Standard USB phone charger, Extra Powerful!" I have just bought in Korea, that is supposed to work with any USB-charged cellphone. They have pictures of a half dozen different cellphones on the box, and a hydra USB cable inside that has mini-USB, micro-USB and some other types of connectors.

Although the question has provided limited details, this answer presents a somewhat different hypothesis from the standard assumption that there's an inductive coil hidden in there somewhere.

The charger in question possibly uses a Piezoelectric Transformer instead of the magnetic (inductive) transformers usually seen for isolation. 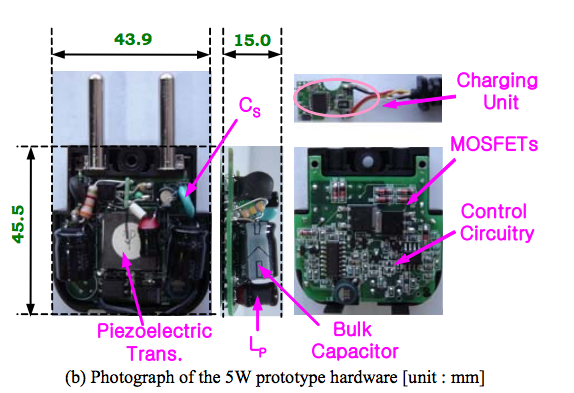 If yes, the designers have used a Piezo transformer instead of a conventional one. Interestingly, the source of this image is a paper in a Korean academic publication. This makes the hypothesis even more apt.

Some interesting information gleaned while investigating this mystery charger:

Some articles of interest:

Full disclosure: I have never worked with, or even seen Piezoelectric transformers before today - the above information was a new learning for me, in the process of investigating the mystery charger.

The isolation is managed by a transformer. However, it's just very small; it's probably one of the bigger surface-mount components you see in there. See How do these new-fangled phone chargers achieve step-down? for a more detailed description of the technique involved. Note the transformer in the middle of the circuit.

A high-frequency transformer can be very small, especially when triple-insulated wire for one of the windings. The device is most likely only designed to work at 120VAC so the 2mm clearance needed for a 150VAC circuit rated at pollution degree 1 (since the charger is essentially a sealed box) allows for very small construction.

If you want to judge safety, the first step is to check for any regulatory agency marks on the package (UL, TUV, CSA, etc.) and cross-reference the file number with the respective agency to make sure it's not fraudulently applied. If there is a valid safety approval, the device would have been subjected to isolation and other safety tests before release to market.

I just bought a "night light" which is an LED that is in a 240V plug. It comes on in the dark and goes out in daylight. It contains a 47muF capacitor in series on the active wire followed by two diodes and then a NPN transistor controlled by the light sensitive resistor. The LED is across the transistor and that's about it. There is a electrolytic capacitor across the diodes for smoothing and a 70K resistor also in series but in parallel with the 47muF cap.

It works. There is a detectable 50hz blinking but if you don't look away, the LED appears steady enough. So there's a DC couple of volts from 240V AC definitely with no transformer.

Not the answer you're looking for? Browse other questions tagged dc transformer charger adapter isolation or ask your own question.

6
Simplest Way to step down the 220AC with more than 10% efficiency
18
How do these new-fangled phone chargers achieve step-down?
3
how do they make travel adapters so small?
7
Converting universal AC to 3.3v DC @ 0.1A
0
Simplest 5 Volt power supply circuit design

4
How to determine the total number of charges a portable charger can supply for a phone?
1
Is it safe to use the cable used in Portable Battery Charger and connect to the phone via the PC USB?
0
Make powered USB Cable for External hard-drive
0
Why touchpad starts acting weird when connecting a cheap USB-C charger?
1
Is charger with USB C connector and 13V output in line with standards?
2
Galvanic isolation of phone chargers