If you get a capacitor that is two plates and a dielectric and next to it you put two plates close but not in contact at opposite sides and the capacitor in the middle is charged, each of its plates will act as a Leyden jar to induce charges in the outside plates.

The potential difference is created the same way the outside aluminum foil on a Leyden jar is charged, when the water inside the bottle is charged.

If I fixed the two outside plates (white plates) in one place and rotated the capacitor (red plates) at 60Hz so that the electric field is charging fast just like a magnetic generator, will it produce constant current if the capacitor itself is not discharged? 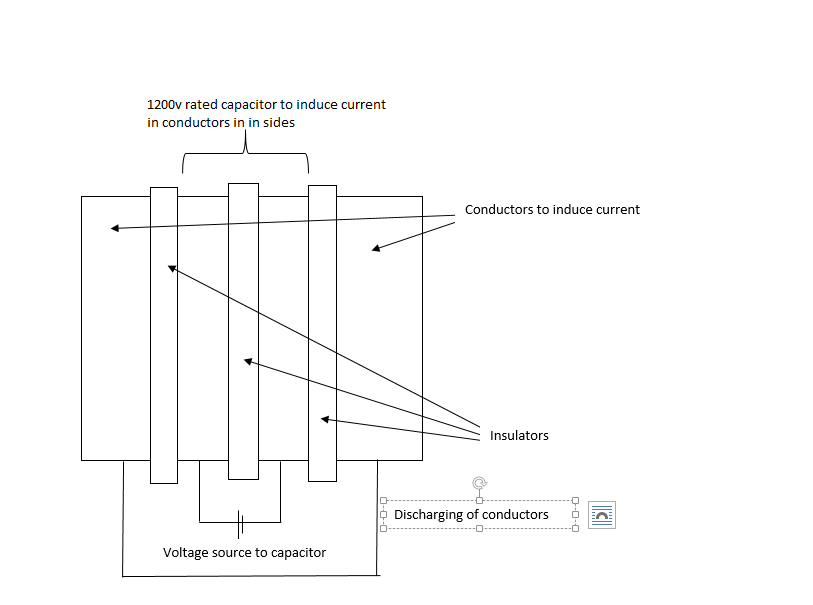 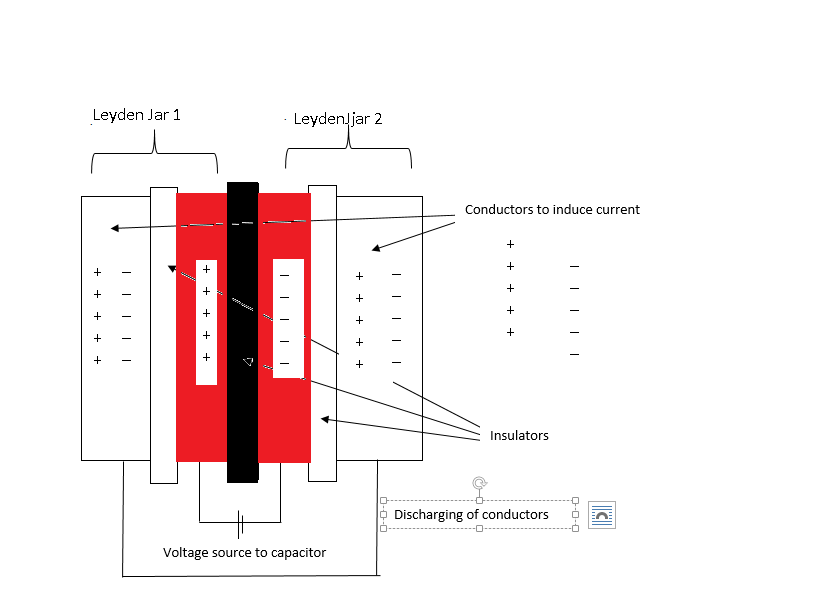 What do you think?

Your unit analysis is off.

So yes, if you can build a 1200 V, 5 µF capacitor1 whose plates can be swapped 120 times per second, you will create a generator. Some of the mechanical work you put into moving the plates will be converted into electrical power. There will also be a significant amount of power drawn from the source that's keeping the fixed plates charged to 1200 V.

Note that the impedance of a 5 µF capacitor at 60 Hz is rather high:

The source impedance of your generator is two of these in series, and this puts a limit on how much power you can get out of it. If you match the source impedance with a load of 1060 Ω and your drive voltage is 1200 V peak (850 Vrms), you'll drive about 400 mA through the combination, for a total power delivered of about 170 W.

1 Assuming air is the dielectric, you'll need a spacing on the order of 1 mm in order to withstand the voltage, which means that the area of each plate needs to be about 566 m2, roughly the same order of magnitude as a baseball diamond.

The basic question seems to be "is it possible to make a generator based on electric charge and capacitance?" The answer to that question is yes. Electrostatic machines that are the "duals" of electromagnetic machines have been constructed and are currently being manufactured. There is currently ongoing research and development of such machines for use as motors and generators. The word "dual" indicates that, in electrostatic machines, electric fields, voltage and capacitance assume the roles of magnetic fields, current and inductance electromagnetic machines.

How about we try some numbers?

As you can see, it takes a very large area and a very small separation to get large capacitances.

Assuming a separation of 0.5 mm, and a capacitance of 1 microfarad, you'll need an area of about 60 square meters. Spinning. At 60 rotations per second - that's 3600 rotations per minute. That's a thing nearly eight meters across rotating at a very high rate - with a clearance of 0.5 mm between the surfaces.

Do you see a problem here?

Your idea is impractical, even if by some chance you got the physics and mechanics correct.

I see on re-reading your question that the moving plates have a capacitance of 5 microfarads.

That makes the area much larger.

You didn't say which plates rotate to which directions and what's the rotation axis. But if we assume there's no more conductive wires nor plates as exactly those which are drawn (=no hidden wires) and the rotation axis is horizontal in your drawing then I can say it doesn't generate current after the outer plates are charged as the forced electric field of the inner plates direct. Some current occurs shortly when the wire between outer plates is connected for the 1st time or the charging voltage between the inner plates is changed.

Rotation doesn't generate new charge. I guess the materials are not intended to rub each other like in some electrostatic generators and there's no charge transport & accumulating structure like in influence machines (see an example: https://www.coe.ufrj.br/~acmq/Wilson/). Continuous current needs a closed loop and a mechanism which generates a voltage around that loop or EMF as electricians use to say. Your wire + the outer plates are an open loop.

BTW. A charged plate generate a magnetic field which is perpendicular with the plate. A charged capacitor which has rotating plates and the rotation directions are the opposite can work as unipolar generator. The output is taken with two sliding contacts. One is in the middle of one plate and the other is at the edge of the same plate. Both plates in series double the voltage. I do not believe the construction survives mechanically as one piece if one tries to get power more than is needed for measuring the existence of the generator function.

Not the answer you're looking for? Browse other questions tagged capacitor electrostatic or ask your own question.

2
Is it possible to provide power using (effectively) a single wire?
10
How can a capacitor store charge whilst also passing current?
2
AC Circuit Having Only Capacitor
0
Charge density (σ) and distance between plates of capacitor given just the relationship between potential difference (V) and width of a metal slab?
1
What will be the steady state Charge distribution of given configuration- battery vs capacitor
3
Can I die from touching one capacitor lead?